So as I hear you all cry Noble 6 is dead! Not true. I will provide as many points I can think of and we’ll see if we can get a debate going. So why do I think Noble 6 didn’t die? Firstly, let’s go with the obvious you never see the body. You can never confirm somebody dead unless you know for certain as in Halo people have came close to dying before and then they manage to stay alive no matter the odds so considering that 6 is a hyper lethal I don’t see why he should be assumed dead. Secondly, in the last two cutscenes (the one where he is fighting and the other with his helmet), his helmet has moved position because in the second last cutscene you can find where he sets down his helmet and it is in a different location to where it is in tge last cutscene and this is mire evidence to prove that he survived the fight picked up his helmet moved it some where then dropped it after it being cracked. Thirdly, the Covenant didn’t glass the whole of Reach as in the last cutscene (before it cuts to the future) you can see that parts of the planet aren’t glassed as you can see grass and this can suppirt the theory that 6 may not have died from the glassing. More evidence to help prove my case is that in the cutscene if 6 fighting the Elites don’t manage to strike 6 with their Energy Swords or Daggers and so this can further outline that they didn’t kill him and because he is a hyper lethal vector he should get himself out of the situation and he can even take a few hits from an Energy Dagger and Energy Sword as he still has armor shielding on his Mjolnir armor which can take those Energy Sword and Energy Dagger hits, also he does not tire easily so if people say “He won’t be able to dodge the Energy Swords and Energy Daggers” that’s a lie. Lastly to wrap this up, Bungie themselves creators of the game never really fully confirmed his death in the canon and said the fate of 6 was up to the player and 343i have never came forward either to declare 6 dead so he could possibly return at a later date as well as the fact that Spartans can be resuscitated like Linda before CE where she was put in Cryo and she had an Energy Sword wound, need I say anymore? Also side note even if 343i had of come forward to say 6 was dead that doesn’t mean mych when they brought Cortana back, also place don’t bring up crap responses and do make an effort of an arguement and thanks for your patience if you read through this and I hoped it was a good read and even if it isn’t canon after all this I’m making it my personal canon as I loved 6 as a character, he was so badass. :)
Show MoreShow Less

.
Show MoreShow Less
I made a post on this a good while back. While I won't dispute that the character could be resurrected by 343 for whatever reason, Bungie did state that Noble Six did not survive on Reach.

Marcus Lehto did an article in 1up you can read here:
http://www.1up.com/news/bungie-explains-halo-reach-ending

Quote:
After they had already succeeded in making sure that one thing that gave humanity any hope was actually saved, (we decided) they were going to go out all gung-ho and guns blazing. It was a crazy, controversial thing within our studio. We had a lot of people who were like, "No, we shouldn't end it that way. We should allow the player to play on and, in their heads, keep living." But we wanted to bring it to a close.

Quote:
And there wasn't really anything we could do with the end, the demise, of Noble 6 because that leads into the events just prior to Halo 1. It was a great way just to bring everything full circle for the franchise.

Quote:
We had pretty hardcore creative debates. There was some heated discussion, some passionate discussion, about what we should be adding. Even the little sequence during the credits was like, "Oh, this would be such a great little thing to add." And we kept adding all these things. It was turning into like, "Oh my God, you've got to stop doing that or else we're never going to get this thing done!" But it turned out to be these sequence of events towards the end of the game that really just helped wrap everything up in a way that we finally felt was totally solid and would satisfy our fans.

Additionally, his death is listed in the Mythos book that was published back in 2016.
If that doesn't seal it, his death is confirmed at the end of game in Halsey's speech - highlighted of emphasis:

Quote:
"It didn't take long for Reach to fall. Our enemy was ruthless. Efficient. But they weren't nearly fast enough. For you had already passed the torch. And because of you, we found Halo, unlocked its secrets, shattered our enemy's resolve. Our victory - your victory - was so close... I wish you could have lived to see it. But you belong to Reach. Your body, your armor - all burned and turned to glass. Everything...except your courage. That, you gave to us. And with it, we can rebuild." 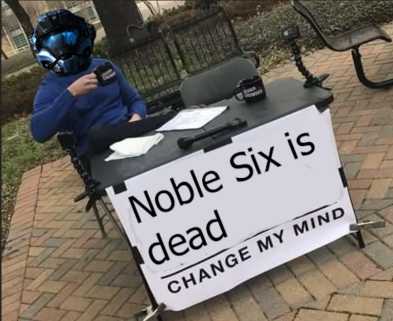 Show MoreShow Less
To add to the above, this is being closed off because every time this topic comes up and we leave it open in good faith, it never ends well and has to be locked.
Show MoreShow Less