Reply
This week in Canon Fodder, we revisit Halo: Hunters in the Dark.

Show MoreShow Less
A very fantastic CF Grim, its nice of you to interview Peter David as well and I'm already looking forward to the Last Light CF.
Show MoreShow Less
With the Ascetics existing informally during the days of the Covenant, and now officially existing with real backing I wonder why they have yet to really appear in the Halo Universe.
Show MoreShow Less
I had a lot of fun with this weeks CF, thank you Grim.
Show MoreShow Less
So, reading N'tho and Usze's pages, N'tho was there on Earth with Thel and John while Usze was with Rtas over Installation 05. Also, the fact that their pages only mention taking part in stopping Truth and no mention of retrieving Cortana or setting off Installation 04b, it looks like N'tho and Usze left with Rtas. Am I correct on that?

It seems that Vale is very young (21 or 22 in 2558), Locke is also only 27 in 2558. What makes you choose to have these characters have young ages from a fiction design point?
Show MoreShow Less
Really great canon fodder Grim! I didn't pitch in my chatternet due to being a bit busy and well, I wasn't able to decide one moment/aspect to write about, heh.

I really like Olympia Vale, but I feel like Holly Tanaka is underloved and underappreciated, so I'm going to be going with Holly Tanaka as my number one on Osiris. Someone's got to appreciate her right? But yeah, Olympia Vale is an interesting character for sure. And she's already got her mini fandom! You've probably seen those... fan images... about Olympia Vale and Usze already... Let's leave the details elsewhere...

I really like that in halo that characters can be explored in different ways other franchises might not have the 'luxury' to.

And great interview with Peter David! People seem to say the same thing over and over: That you guys are great to work with, and I like how Peter David finds his work appreciated here due to this being canon canon. The resources you provide, it is probably soooo fun to work with you guys!

It's also nice to see those concept art creatures, and Quadwings, integrated into the story!

And nice bios on the characters, interesting to see how Vale got into the Spartans, it clarifies her entry, considering all the threads about it... She's certainly capable. I think it doesn't simply take having physical capabilities to be a Spartan, but I think it requires the willingness to go further, and a certain type of mindset.

The info on the Soldiers is from an earlier canon fodder I think. Perhaps one day you'll be able to clarify gameplay-story differences in regards to weaponry and enemies.

WashedMoon67526 wrote:
I can honestly say that this was the best canon fodder so far. Great work Grim.

This was up there! Good work Grim
Show MoreShow Less

Aussiemate5128 wrote:
Another Week, Another Great Canon Fodder! :) Thanks Grim

I foresee Edward Buck being the sort of father figure of the group, being the oldest and most experienced in Osiris.
Show MoreShow Less
In concurrence with what everyone else has said, this week's entry was simply fantastic. :)

There's a lot to absorb with this one and I look forward to reviewing it all over the next few days. The information about the creatures that inhabit the Ark is fascinating, and thank you for those comments from Mr. Reed and Mr. David. It's really cool you guys are so willing to give use these insights into the processes that make the Halo fiction so great.
Show MoreShow Less
Another week, another entry into the Sangheili lorebook.

And no...talking about wild life does not count.
Show MoreShow Less

xNAKED CROOKx wrote:
Another week, another entry into the Sangheili lorebook.

And no...talking about wild life does not count. 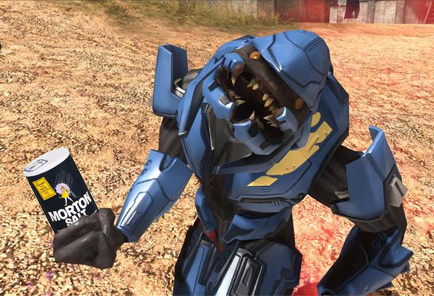 xNAKED CROOKx wrote:
Another week, another entry into the Sangheili lorebook.

And no...talking about wild life does not count.

Quote:
“The fun of the Halo franchise is that we have all these outlets for telling stories.” Says Reed, who is the lead writer for Halo 5: Guardians. “So we got to meet Locke in Halo: Nightfall, and Tanaka in the comics, and Vale in the novels. That’s a luxury a lot of other games/movies/etc don’t share.

It used to be fun.
Stopped being fun when it became a requirement to understand what was going on in the games.

Hope you give some reasons in-game why those Spartans are there in Osiris hunting blue team.
Not everyone that plays Halo gets every bit of content you put out.

AssaultCommand wrote:
Wow, you guys actually went ahead and did the pun yourselves :P
Why not just rename the actual book? Jurassic Ark sounds like a great title.

I remember that XD

Really liking the focus on the formerly 'minor' characters, and the ambient wildlife of the universe. Quadwings! <3
After reading this week's Canon Fodder, I had to give drawing the Halo Raptors / Blind Wolves a try. Funny that my first ever Halo fanart would be of not a major character, location, or weapon - but a critter ^^
Show MoreShow Less
Another great Canon Fodder! Been looking forward to the talk with Peter David since the book came out. Other than some minor gripes, he did a spectacular job with Hunters in the Dark, and I hope to see him return!

On the side: As we now know that N'tho is the Sangheili on the cover, who is the Spartan? I would assume Kodiak since his past with N'tho was a major part of the book, but historically, a Spartan with a mechanic arm didn't have their armor cover said arm. This could have changed during [GEN2]'s run, but it could also indicate that the Spartan on the cover is Holt. So, Grim, who is that mysterious Spartan?
Show MoreShow Less