Halo: Outpost Discovery is a touring fan experience for all ages, that brings the Halo video game universe to life like never before. This weekend-long event lets you step into Halo’s vast and epic world, with enthralling themed attractions, interactive in-universe encounters, the latest playable game releases and so much more. Before I go any further though, be sure to watch the announcement trailer and get a sense of what we hope people feel when attending one of our events.

To expand on some of the activities highlighted in the trailer, go no further than the list below. As a heads up though, there are even more experiences (like a Covenant Escape Room) that you can read up on HaloOutpostDiscovery.com! 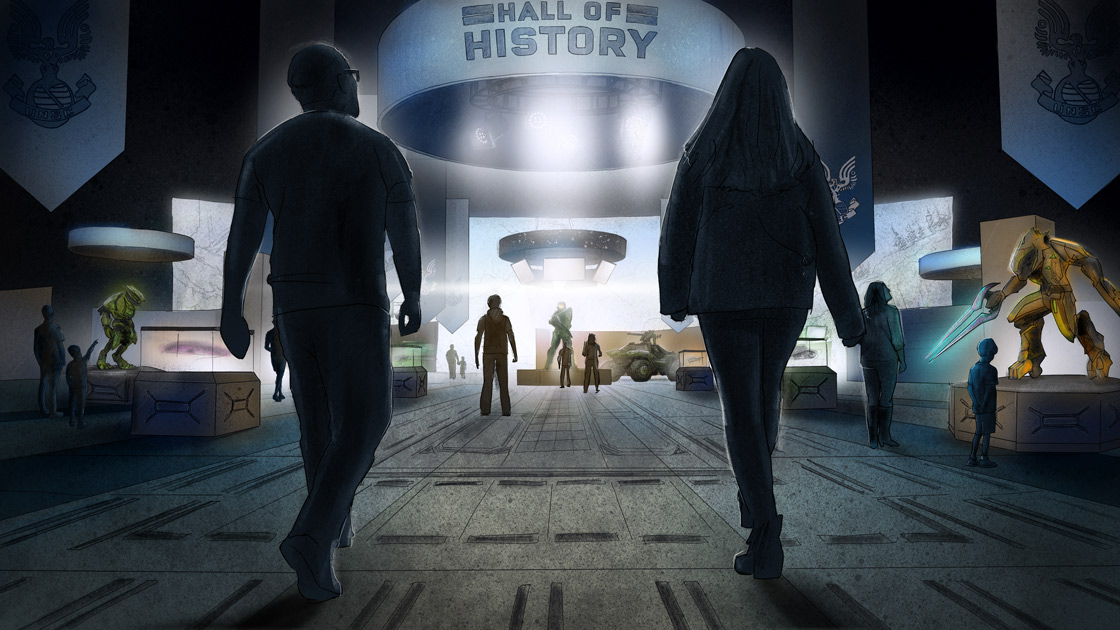 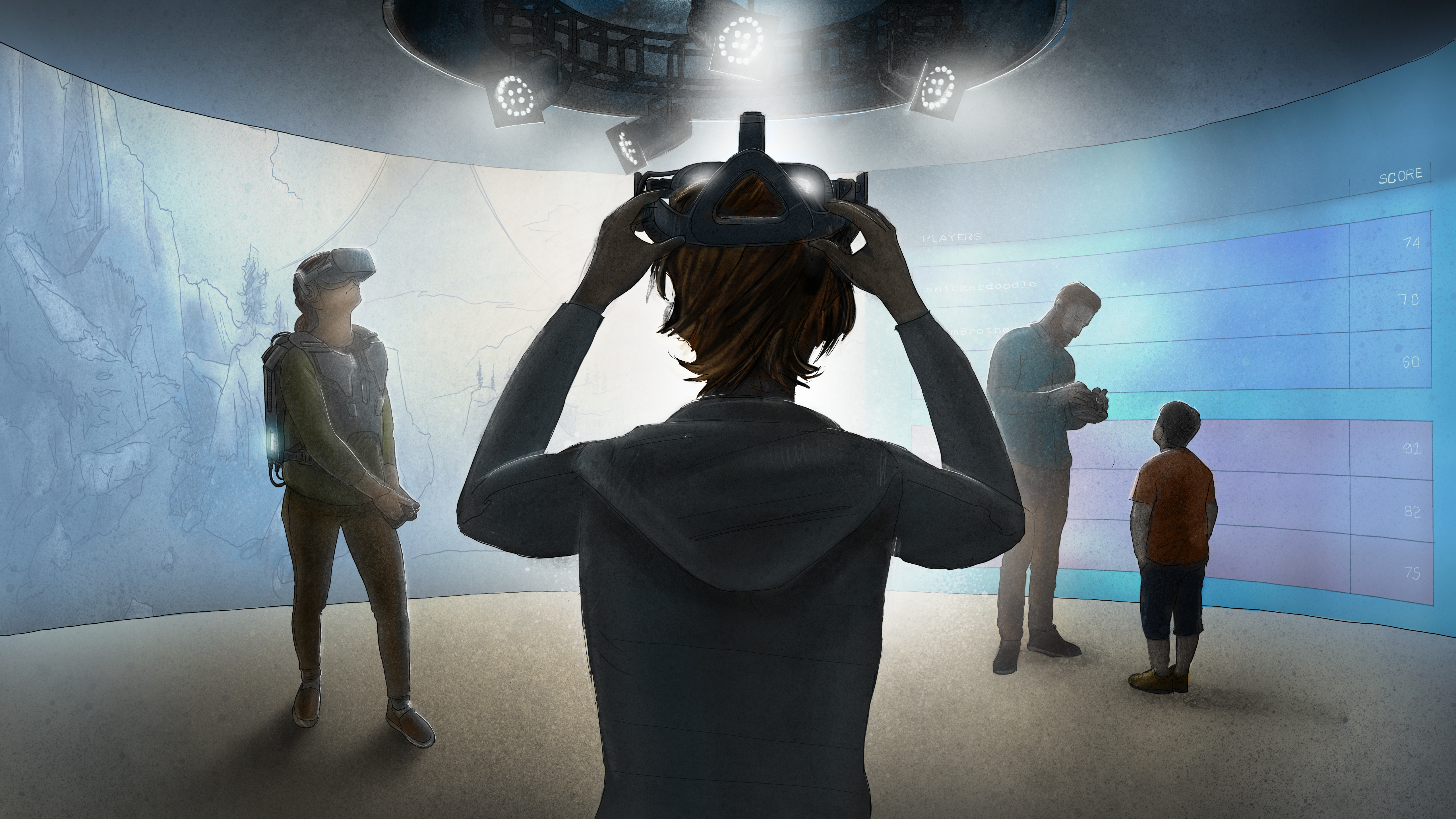 Now that we've piqued your interest. Here are our travel plans for Halo: Outpost Discovery this year:

If for some reason you aren't loving the idea of this, how would you feel if I told you our partners for Halo: Outpost Discovery are the same company that brings the Harlem Globetrotters around the world? Yeah... that's pretty freaking cool.

Lastly, for you hardcore community members out there, we compiled a ton of the concept art from the trailer into one convenient location here on Waypoint. Feel free to use them in your videos, tweets, and Forum discussions! 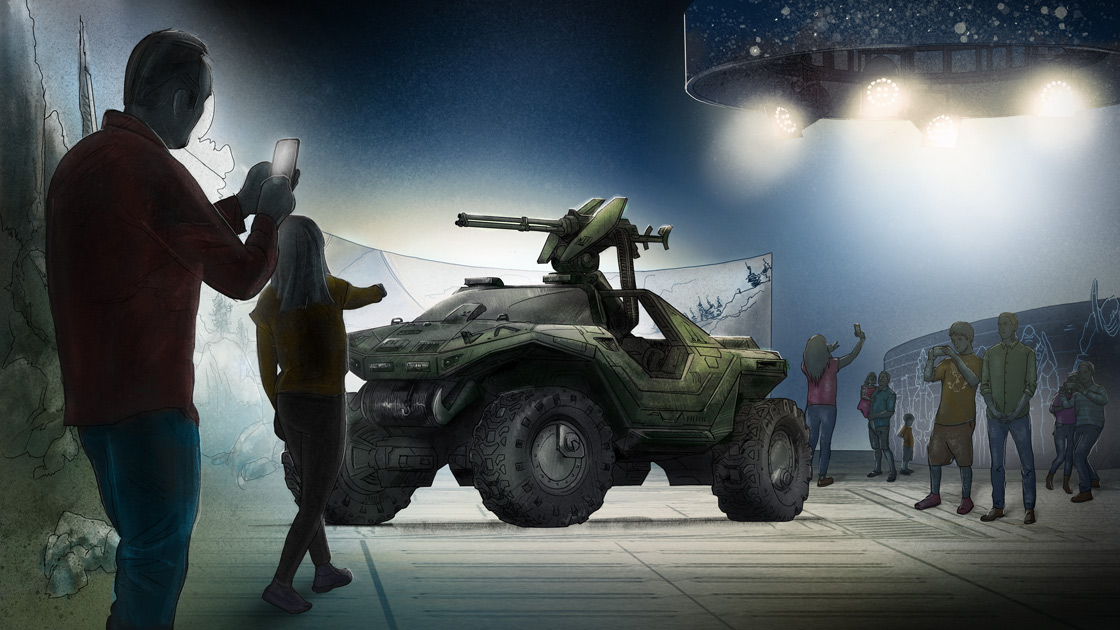 And just a final final reminder, you can find all the information you could possibly want, including answers to FAQs, by visiting HaloOutpostDiscovery.com and follow us at @HaloOutpost on Twitter & Instagram! 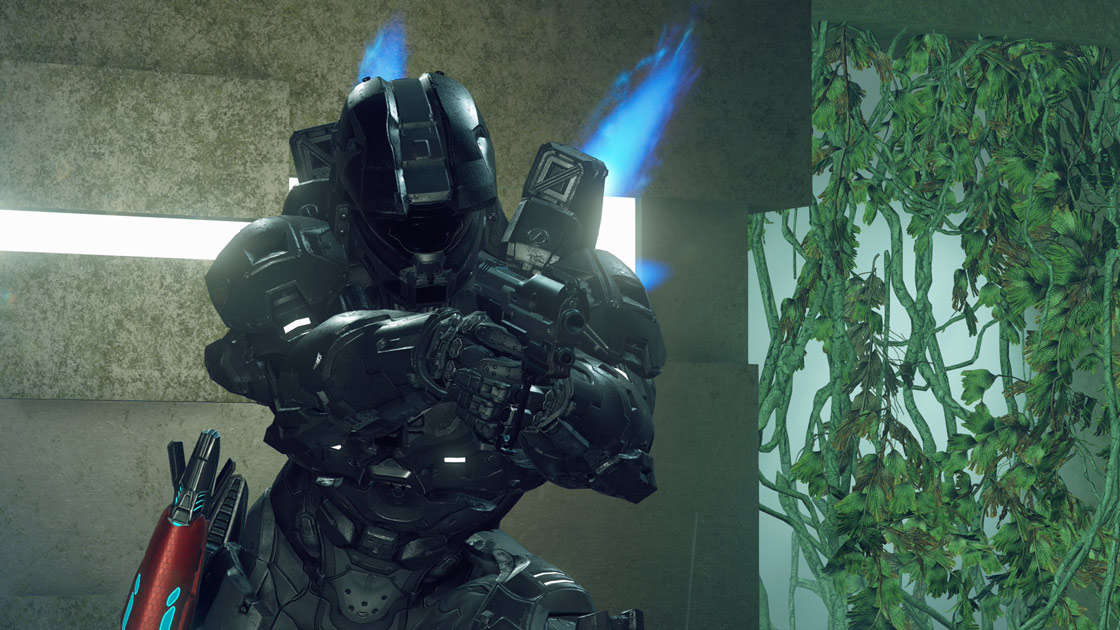 Last Thursday Head to Head launched as a ranked playlist, Roaming King returned to Halo 5 for the second time, and Warzone Turbo made its usual end-of-month appearance. While last week was fairly busy, it looks like the rest of February will also be quite active as well. Let's break it down with a good, old-fashioned bullet point list!

We've slowly worked towards establishing a schedule for Warzone Turbo and Warzone Assault, which some of you have picked up on. We wanted to monitor the health of both playlists when in this rotation before locking it in as the official plan. Since they both continued to perform well, we'll be trying to run Warzone Assault during the middle weekend of each month and Warzone Turbo on the last weekend of each month. That means Warzone players should keep an eye out for one or the other rotating in every other weekend! 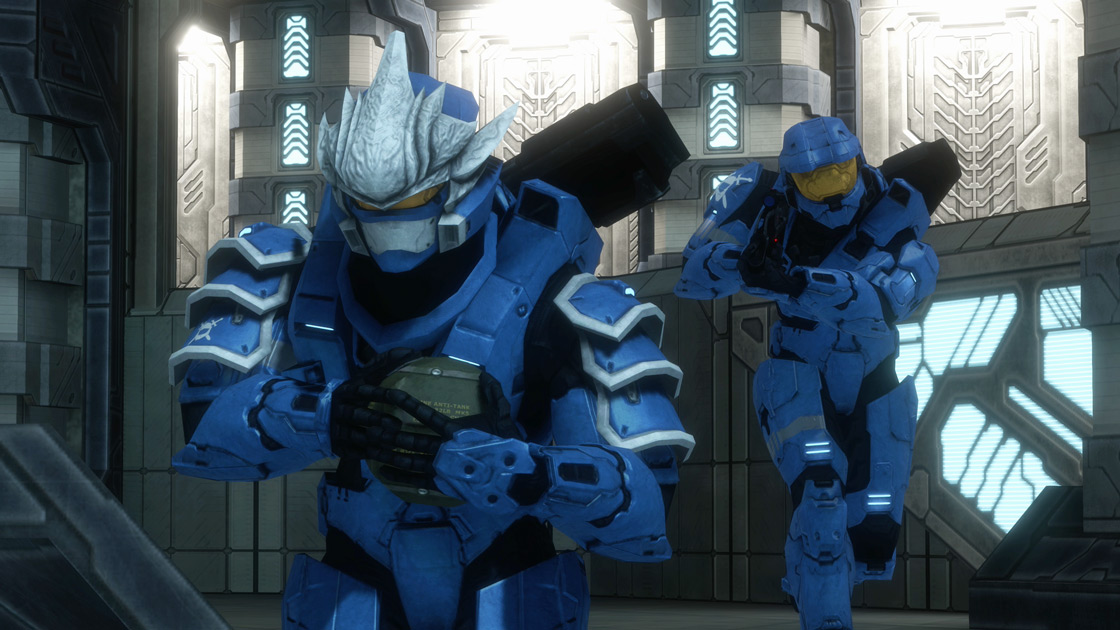 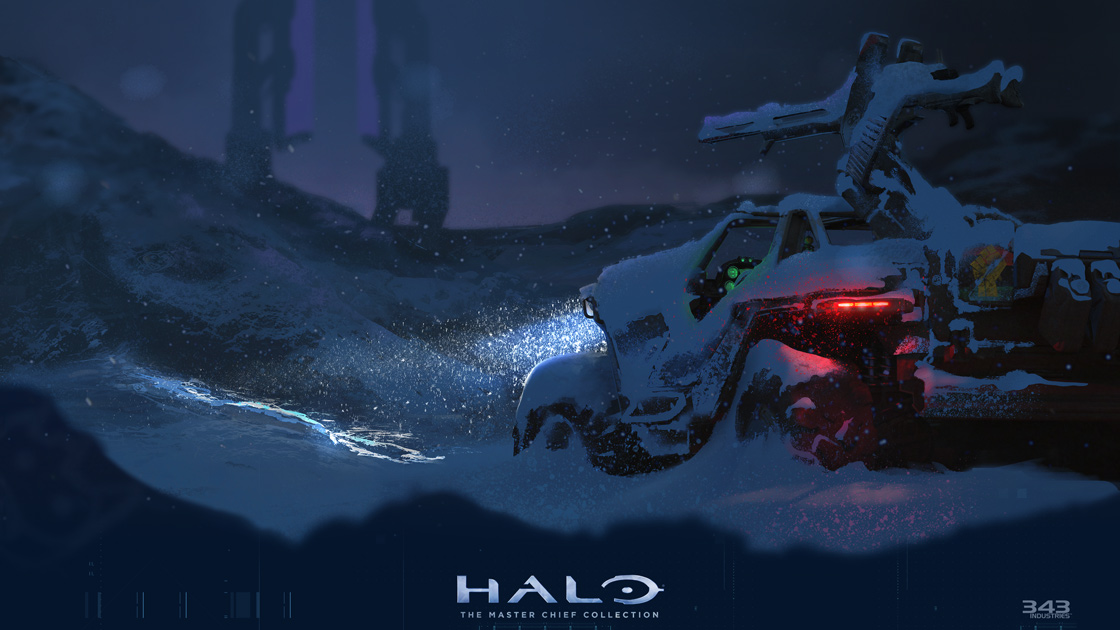 MCC is free to play this weekend as part of a Xbox Live Free Play Days weekend! Aside from the constant stream of content updates to the game, the team has also been hard at work to release playlist updates every week to address community feedback and improve your matchmaking experiences. You'll be able to find a recap of these past two updates just a few lines below. Also, to show the studio's support for Black History Month, which takes place in Februrary here in the US, the team gave our snowy main menu a nice, meaningful addition. To find a 4K asset of this updated main menu, check here!

As for the matchmaking updates, you'll notice that they include a lot of fine tuning that comes directly from your feedback. We're always trying to strike the perfect balance between matching legacy experiences and making improvements. Keeping a direct line with all of you in the MCC Forums here on Waypoint has helped us get closer towards creating the ideal matchmaking experience for everyone – so keep sending over your thoughts!.

Teams have been enabled in head to head for the following games to make it so you can no longer view your enemy after dying.

As a heads up, we try to get these changes made in-game every Wednesday morning and then share the details publicly here and on Twitter. That means, if this is the first time you're seeing these changes, be sure to keep a close eye on the MCC Forums and follow @Halo & @343Postums!

The MCC Team mentioned that their next CU is coming along nicely and will add lots of goodness while simultaneously fixing some pesky problems, such as IP Masking. I can't make any promises on a release date just yet, but please know that they're working hard to continue the positive trend.

Last week also saw a build update delivered for Halo Wars 2. This update incorporates prior balance patches into the build, improves backend systems to allow for better balancing in the future, and results in a smaller overall filesize for the game. As you can tell, our intention was to focus on addressing community-reported bugs and pain points.

Read the blog covering the details of the update to get the full SCOOPTM. Here's a link!

That's right, I'm going to talk about the HCS Invitational at SXSW and Gamers For Giving again! Can you blame me though? These back-to-back events are coming up very quickly, so I have to make sure all of you are prepped and ready.

We're bringing Halo to SXSW in Austin, Texas next month, and we're loading up the broadcast and booth with awesome events. Whether it's competing in a $5,000 Halo 3 FFA tournament or hanging out with our first HCS Grassroots content creators (Ac7ionMan, UberNick, Vetoed), we're trying to make sure there is something for everyone.

To join us, the pros, and fellow Halo fans that weekend, you can purchase SXSW tickets here or tune in online at mixer.com/Halo and twitch.tv/Halo all weekend long!

Our next 4v4 open Halo event is taking place at Gamers for Giving under the umbrella of the HCS Grassroots program. Just like UGC, Gamers Outreach has Halo tournaments down pat, as they've been including Halo at GFG events since Halo 3 came out. Find details on general event, travel, and location information here and pick up your team pass here! 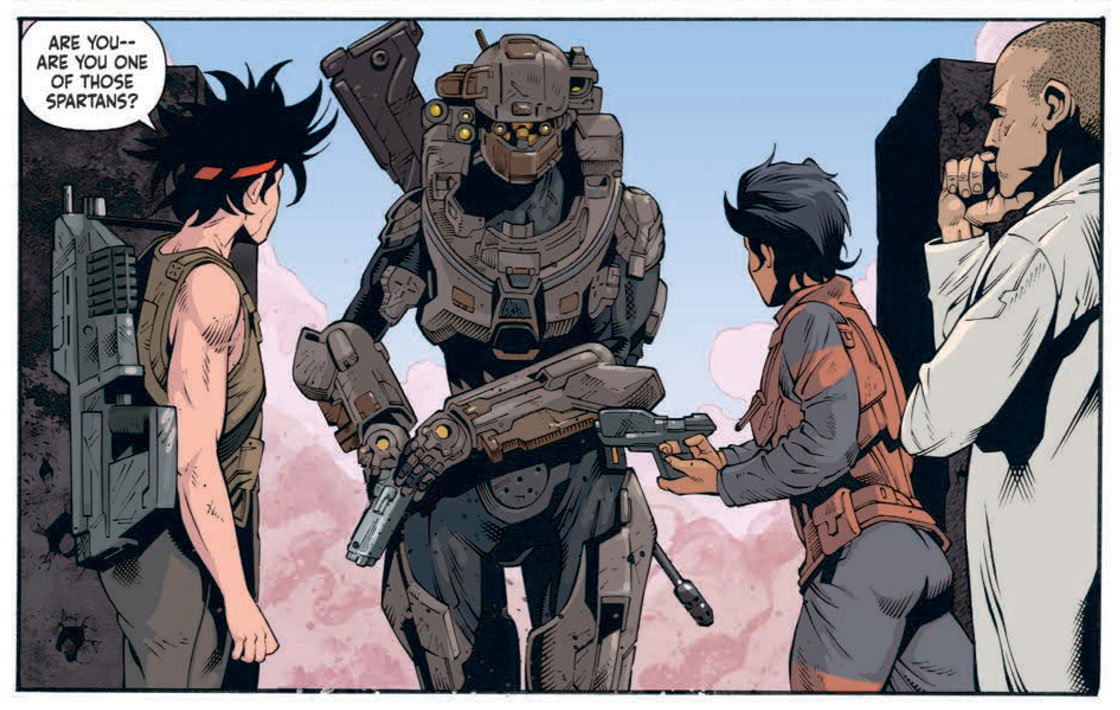 Last week we announced that Justin Robey would be joining us at the studio in a newly created position, Director of Player Voice. He joined me on the 343 Social Stream (you can catch the rebroadcast here) and we talk about his role, how he got in the industry, and plenty more. Now I think the only remaining thing for him to do is introduce himself and his role in a Community Update. Robey, want to tell us a little bit about yourself and what you'll be doing here at 343?

Thanks John. What a great question. It’s funny, since the announce of me joining the team about a week ago, I have gotten to see what everyone else’s perspective is on what my role will be and their expectations on what this means for the game. Some feel I should give them my number and take calls day and night, others think I literally decide who gets to play the voice of Master Chief (I guess that’s a way to interpret Director of Player Voice). The majority of the community though, understands fundamentally that I am on the team, as a director/leader, to represent the diverse group of players who interact with Halo now, in the past and in the future. Regardless of people’s perception, what has been energizing is how excited the community is about having someone represent them for Halo Infinite.

The Director of Player Voice role is very multifaceted, it’s about becoming a unifying voice that takes in all the different ways we gather player feedback. That means working with Community, Esports, Flighting, Test and the multitude of other avenues we used to collect feedback from the player. Then using those perspectives to ensure the player is heard and represented in the design and production of the game as it moves through development. It’s also about ensuring that the game is verified against actual players in both very public and very behind closed doors methods, depending on what avenue make the most sense for the game and where it is at in development. This role represents a shift that has been happening in 343 for a while, and I know many of you who have been following the work “we” have been doing on Halo The Master Chief Collection. It’s critical to our success both as a studio and for Halo Infinite.

Now I know words are cheap and I have seen some of that feedback already, so it’s about showing you, and we will. So stay tuned and you will start to see ways in which you can find ways to engage and ensure your feedback is heard. In the mean time I have been watching your videos on YouTube, hanging out in the Halo Discord server, reading threads on Waypoint and Reddit and of course all the feedback I am seeing on Twitter and social media. It’s not going to be perfect, we are going to make mistakes, but you guys are a critical part of making Halo Infinite great. That’s the part that excites me!

So, thank you for the warm welcome and now it’s time for us to get to work!

Thanks for jumping in and giving us even more insight as to how you're approaching the role. I'm ready to get back to work too!

That brings us to the end of another Community Update, but before I go... I wanted to give you a heads up that I've gotten approval to release even more Halo concept art in the future. I'll start by releasing by a full quality version of a piece that we all know and love so much. I hope you enjoy! 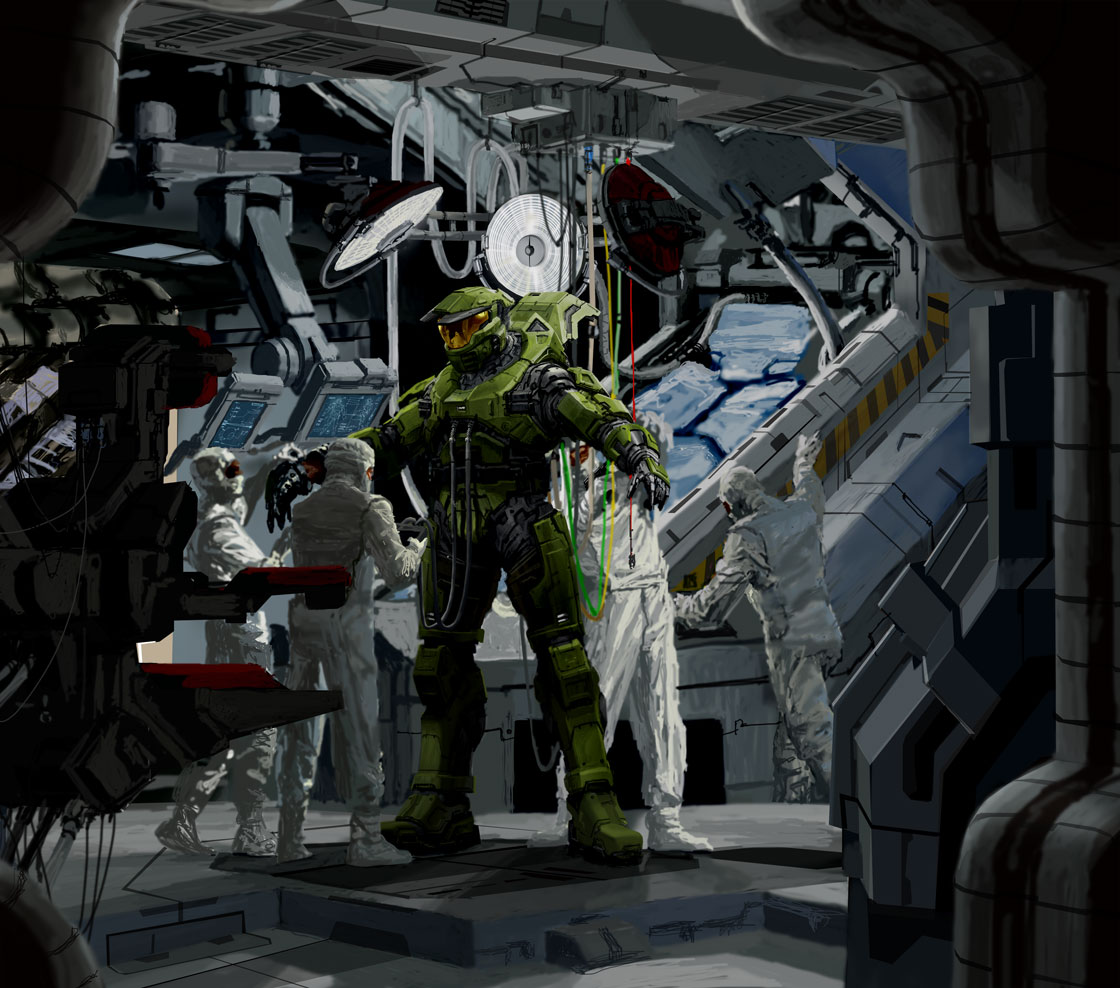 p.s. I'm thinking I may include my best Halo play of the week at the end of each Community Update. What do you think? 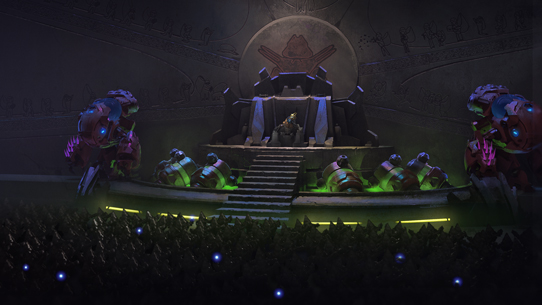 Is it me or does 2019 just keep geting better and better? Baseball is back, the sun is breaking through the clouds, and MCC is definitely still coming to PC. With so many cool projects being worked on inside the studio; Halo MCC on PC, continuous MCC updates, and Halo: Outpost Discovery, it just keeps adding to the feeling that we're in for a good year. However, as much as I'd love to write more about all of our plans for this year, let's just take a closer look at all everything happening...