During the Halo World Championship, we announced the imminent launch of the Halo Championship Series: Pro League – the next evolution of Halo esports. The HCS Pro League celebrates the world’s top Halo players and teams as they compete on weekly scheduled match days, and is accompanied by a robust open series that fosters the best up-and-coming talent as they fight to battle their way into HCS Pro League at the end of each season. Throughout the season, we look forward to watching key matchups as talented amateur teams rise to the top, and prepare for an epic season finals where both new legends and new champions will emerge.

Based on prior performance as well as their top placing at the 2016 Halo World Championship, Counter-Logic Gaming recieved the first direct invite into the HCS Pro League.

Here’s an overview of the Pro League qualification process for the Summer 2016 Season: 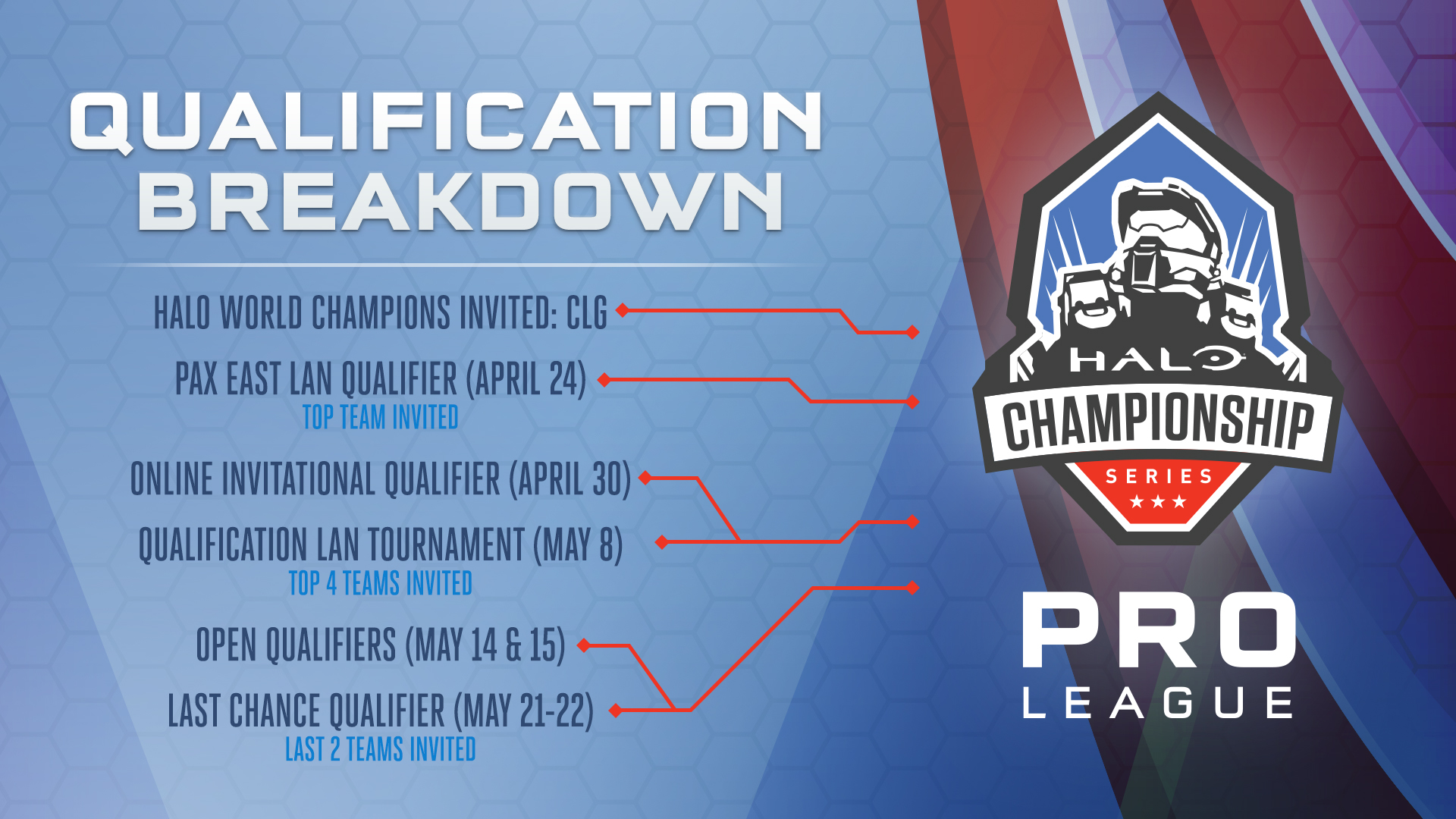 Here are the components of HCS Pro League qualification in North America:

Note: All qualification will take place on the same map / game type rotation as the Halo World Championship 2016 Finals.

The HCS Pro League will see the top 8 teams in North America competing against each other with two matches and broadcast days per week, with the entire season schedule laid out at the beginning of the season. This will allow teams and fans to prepare for the matches ahead, and look forward to the biggest matchups of the season. All teams will play each other twice during the regular season, and the top 4 will advance to the Summer 2016 Finals. While the teams that finish in 5th and 6th place will not make it to the Finals, they will still have their spot guaranteed in the following Fall 2016 Season. The 7th and 8th ranked teams, however, will have to battle against the top teams from the HCS Open Circuit during relegation, potentially forfeiting their spot to hungry up-and-coming teams.

The Open Circuit acts as a challenger component, and features an active tournament scene that will allow players to form rosters, compete on a regular basis, and climb the standings for a chance to advance to the HCS Pro League relegation matches at the end of each season. We’re expecting to see fierce competition in the battle to fight for a chance at an HCS Pro League spot!

In the European HCS Pro League Summer 2016 Season, six of Europe’s best teams will battle it out twice a week to ensure their place at the top of the standings.

Each game day will consist of three matches, with each team facing each other twice during the regular season. When it’s all said and done, only the top four teams will advance to the Season Finals – an honor that will also secure them a spot in the Fall 2016 Season. The teams that finish in the 5th and 6th place positions from the Summer Season will find themselves fighting for their lives in a relegation event against the top teams from the HCS Open Circuit. 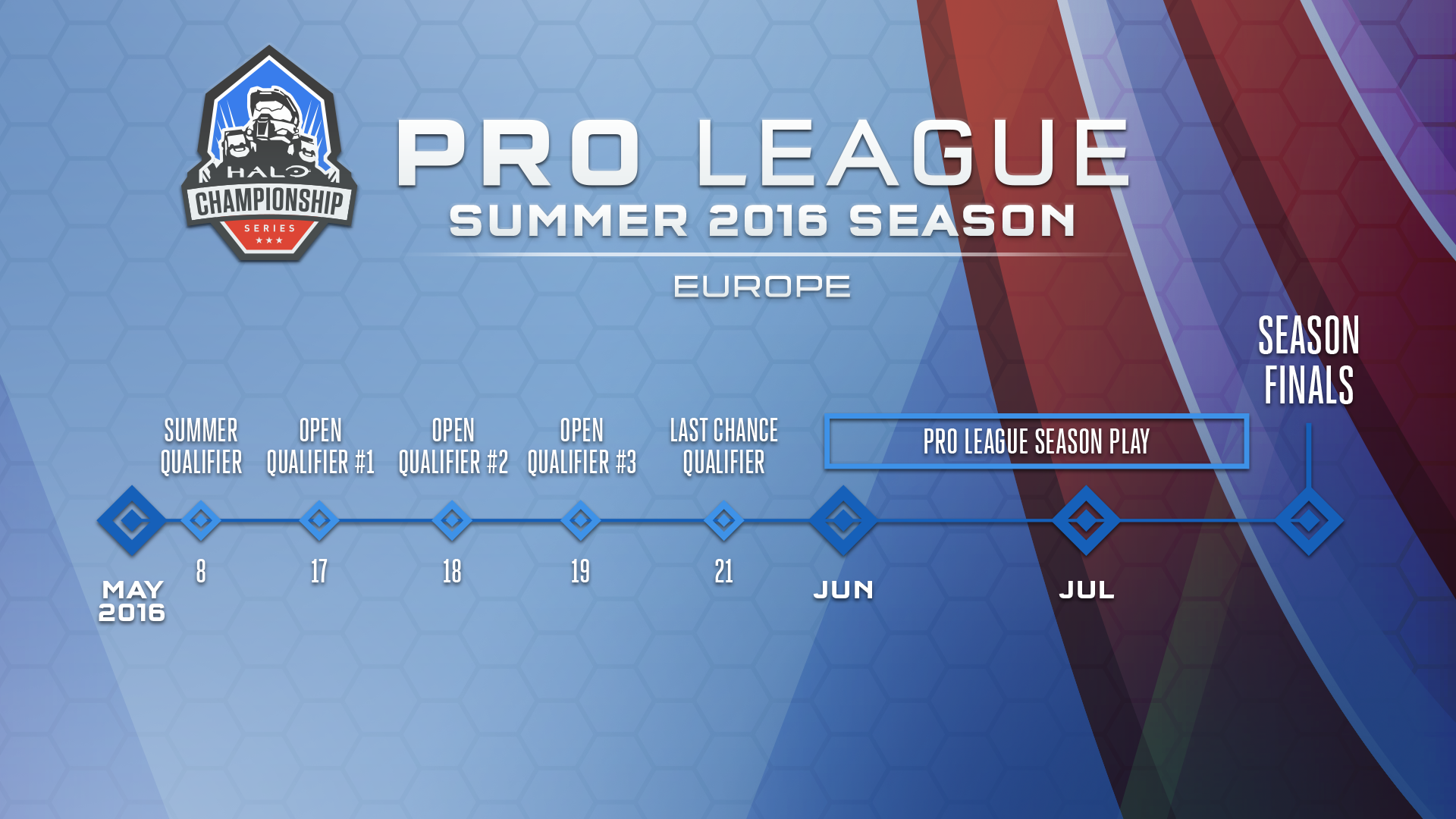 Eight teams will be invited to the Summer Qualifier based on their performance in the Halo World Championship. This qualifier will see the top two teams advance directly to the HCS Pro League, while the remaining six will drop to the Last Chance Qualifier and secure seeds 1 through 6.

Like its name implies, the Last Chance Qualifier will be the final opportunity for teams to qualify for HCS Pro League, with three final spots up for grabs. The winners from Open Qualifiers 1, 2, and 3 will meet the bottom six teams from the Summer Qualifier who are already holding seeds 1- 6. This will be the biggest, best and final chance to grab a spot in the European HCS Pro League for the Summer Season!

Based on their HaloWC performance and final placement, Team Epsilon has already secured an invitation to the Pro League. Consisting of top Halo players Jimbo, Snipedrone, BUK20, BUK57 and their coach Flamez, Team Epsilon not only staked their claim as one of the top eight Halo teams in the world, but did so in style, making Halo history by becoming the first European team to break into the top eight on North American soil 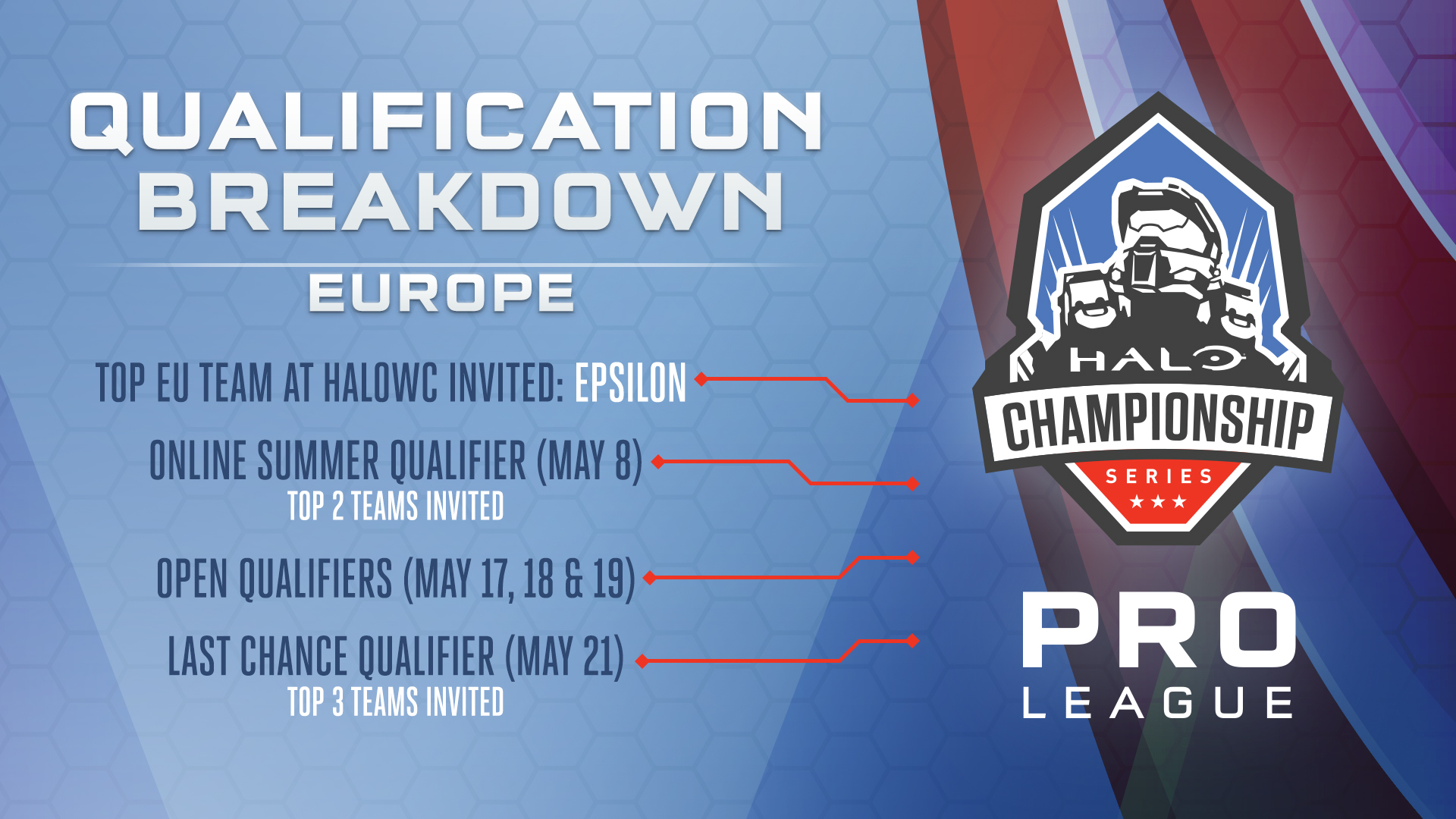 With each Halo title, new multiplayer legends rise. We're reminded of iGotUrPistola’s triumphant (and literal) rise to Halo 2 fame and tops of shoulder at Charlotte 2007, as well as Lunchbox and Roy’s breakout placing at that same tournament. Or Snip3down’s early tournament placings, which made him a household name after just a few Halo 3 tournaments. Stories such as Huke coming out of nowhere to place Top 4 at the Halo World Championship. These are the real stories of players who wanted to prove that they are some of the best in the world, and did just that.

Each new season of Halo esports identifies up and coming players, and the HCS Open Circuit will be no exception.

The HCS Open Circuit is the place for all teams and players - those looking for redemption, as well as new talent that will rise through the ranks. The Open Circuit will leverage a point system with weekly online cups in both Europe and North America, run by our partners at ESL. We’ll also be working to sanction other tournament organizers to add more official Open Circuit tournaments to the roadmap.

Open Circuit cups run by ESL will be very familiar to those that competed in Season 2 of the Halo Championship Series last year. On Saturdays, teams will battle through large open brackets and after the final pistol round is fired, the top 8 teams will head into that Sunday's Legendary bracket, where they’ll meet the top 8 teams from the previous week. Each Legendary bracket will feature a 16-team tournament with points awarded to each team. The higher the placing, the more points awarded.

To end the Summer 2016 Season, one final tournament will be held where the top two teams will compete against the seventh and eighth place Pro League teams. The stakes? The final two spots in the Fall 2016 Season HCS Pro League.

Below is a look at the tournaments held by ESL, all of which are free to enter. Registration will be open next week. As mentioned previously, we’ll be working to sanction other tournaments in an effort to create more opportunities to earn precious HCS Points.

Grab your teammates and start practicing in the Team Arena playlist, which has been updated with the official HCS game types for Pro League and Open Circuit. To get the details on these game types, head here. For all updates on the Halo Championship Series, follow @HCS and @ESLHalo on Twitter, and keep it locked to Halo.gg.