In anticipation of the release of Halo: The Master Chief Collection next week, 343 Industries is excited to announce the “Halo Championship Series”, the official eSports league that will celebrate the franchise’s rich competitive gaming legacy while building an all-new platform for the future of Halo eSports.

The “Halo Championship Series”, or HCS, was born of 343 Industries’ desire to curate a quality eSports experience – for pro players, enthusiasts, and spectators – by creating a single sanctioning body for Halo. Designed to foster the best environment and platform for competitive multiplayer, the HCS will showcase, sponsor and support existing tournament organizers in the growing landscape of eSports today. To help fulfill this ambition, 343 Industries has teamed up with Twitch, ESL, and various tournament organizers to create a year of high-stakes action featuring Halo 2: Anniversary, the newly reimagined multiplayer engine within Halo: The Master Chief Collection.

“Halo was one of the first console eSports titles to rise to popularity a decade ago,” said Che Chou, Franchise Media Director, 343 Industries. “With the HCS, we’re harnessing that passion and investing back into the community that’s still vibrant today. In addition, our partnerships with ESL and Twitch – both parties with years of invaluable expertise – will help us realize our vision of quality and equality for the HCS.”

"This is a significant moment for both the huge Halo community on Twitch and the game’s overall fanbase,” said Ernest Le, Director of Publisher & Developer Partnerships, Twitch. “Partnering with 343 on the Halo Championship Series allows us to invest in the players and tournament organizers. We can then build on that foundation to benefit Halo fans worldwide."

“Halo is one of the most storied franchises in gaming and has such a rich eSports legacy,” said Craig Levine, Vice President, ESL America. “ESL brings a proven track record of hosting world class competitions and broadcasts and are excited to be an official partner of the Halo Championship Series. In 2015, the HCS will crown a new generation of Halo champions and showcase Halo to millions of eSports fans around the world.”

Players and fans can see an overview of league information at HaloWaypoint.com/HCS.Within the coming weeks, 343 Industries will publish the official rules handbook of the HCS, and players will also be able to register their teams and begin competing online in the official ESL HCS league, view their global Halo rankings, and more.

343 Industries will be sharing more details about the Halo Championship Series at the Halo: The Master Chief Collection Launch Invitational tournament, taking place this Saturday, November 8 and Sunday November 9, where 32 of the world’s biggest names in FPS eSports will be facing off for their share of $50,000 to celebrate the launch of Halo: The Master Chief Collection. It all starts on Saturday, November 8th – tune into Twitch.tv/Halo at 2PM PST to catch the action and learn more about what’s ahead for eSports and the Halo Championship Series.

343 Industries:
343 Industries is the developer of the blockbuster “Halo” series of video games and, as part of Microsoft Studios, oversees the “Halo” franchise, including games, linear programming, novels, comics, licensed collectibles, apparel and more. 343 Industries is home to world-class talent that delivered award-winning titles like “Halo 4” and “Halo: Combat Evolved Anniversary” as well as the action-shooter “Halo: Spartan Assault” and the live-action digital series “Halo 4: Forward Unto Dawn.” The studio is currently developing “Halo: The Master Chief Collection,” “Halo: Spartan Strike” and the next installment in the legendary saga of the Master Chief, “Halo 5: Guardians,” while continuing to transform entertainment experiences across the “Halo” universe with groundbreaking projects, including the “Halo Channel,” an upcoming Halo television series, and the all-new digital series, “Halo: Nightfall.”

Twitch:
Twitch is the world’s leading live video platform and community for gamers where more than 60 million gather every month to watch and talk about video games with more than 1.1 million broadcasters. Twitch’s video platform is the backbone of both live and on-demand distribution for the entire video game ecosystem. This includes game developers, publishers, media outlets, events, user generated content, and the entire eSports scene. In February 2014, Twitch was ranked the 4th largest website in terms of peak internet traffic in the U.S., fortifying the brand as an entertainment industry leader and the epicenter of social video for gamers. For more information visit: www.twitch.tv.

We’ll be releasing the official HCS rules in the coming weeks, but for now, here’s a quick look at what the Halo Championship Series is all about. 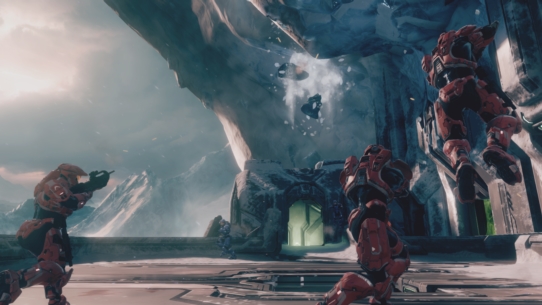 We know that Halo fans around the world are excited for the launch of the Halo Championship Series, and we are too. The first pre-season online cup was originally scheduled for 11.16, however, we’ve decided to postpone until the following week, as 343 Industries is focused on resolving existing matchmaking issues. This delay will ensure that the first pre-season cup is up to the standards of our fans and competitors.

The official maps and gametype settings for Halo Championship Series.