Checking in once again to provide the latest on Halo: The Master Chief Collection updates, and also talking a bit of #HUNTtheTRUTH. Let’s get to it.

The April content update, which focuses on ranking, title-specific improvements, and more, remains on track for delivery this month, and the team is putting on the finishing touches, and running final test passes. We’ll provide details about the full contents once we have locked a definitive release date. Additionally, we’ll detail some of the new systems that are being put in place regarding quitting, betrayals, reputation, and more. Look for more info soon.

This week, we released Team Doubles, which allows you to play a mix of Halo 2 Classic, Halo 2: Anniversary, Halo 3, and Halo 4 game types, and we'd like to thank you for your feedback on the playlist. We will adjust voting options and weighting in a future update to improve the mix of BR-start game types. Last week, I didn’t mention Team Objective, and I do believe some of the strategists and tacticians amongst our ranks began to worry. Fear not, hill holders and flag fumblers: Team Objective is still on the way, and tentatively scheduled for release in the coming weeks. Additionally, we’re looking forward to bringing SWAT back into the mix.

For those of you who haven’t yet begun following #HUNTtheTRUTH, the story follows the detailed and enigmatic reports from 26th century war journalist and photographer Benjamin Giraud, who you originally met way back in the Halo Graphic Novel story Second Sunrise over New Mombasa. Giraud is on the hunt for the truth behind the Master Chief; who he is, how he became the hero we know, and how things may have changed since the Covenant War ended. Through both never-before revealed visual documentation as well as lore-laden audio episodes, you can join Ben on his journey to discover more about the Chief than ever before. To catch up, head here, and to listen to each week’s episode, you can head to the Halo Channel, Soundcloud (via the aforementioned link), and as of today, the episodes are also available on iTunes. The next episode will be available at 6PM PDT on April 5.

Over the next few weeks, we’ll start talking a bit more about Relic, ODST, and future updates. We’re excited, and we hope you are too.

Lastly, I will be traveling out of the country for the next week, so please do expect delayed responses on Twitter and elsewhere as I bounce around on café wifi. Upon my return, I’ll be back with the latest.

Over the past few weeks, the sun has slowly began to make its way back over to the greater Seattle area, indicating that things like summer, sunshine, and warm-weather expeditions are all on the way. One particular annual warm-weather journey is that of E3, and I do believe many of us are already on board a variety of fast-moving hype trains, most of which are not equipped with brakes. 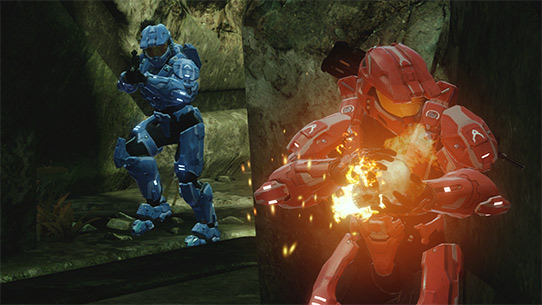 This week, we’ve got the latest on MCC content and playlist updates as well as some extra Halo 5: Guardians Beta stats and notable accomplishments. Let’s get into it.

Continued improvement to the MCC experience remains our top priority as a studio. Work on our upcoming content update focuses on Matchmaking search time, Match search success, and Lobby / Party functionality. Fundamental changes to these systems will improve the overall experience while also allowing us to address additional issues such as title-specific hit registration, Matchmaking ranking, and beyond.