Playlist Update: Team Doubles is Back

It’s been a short while since we last spoke, and as some new goodness is on the horizon, I think it’s appropriate we talked a bit about it. To begin, the additions of Remnant (Relic) and Halo 3: ODST draw nearer, and the team is currently finalizing the exact availability date for these drops. Once locked, we’ll be providing the full details of what’s to come, including the exact timing of the releases, the ODST achievement list, and more. As always, we’ll also be providing the full details of what’s included in the next content update as soon as it’s available.

As I type this, the playlist team also continues to finalize changes for our next playlist update, which is currently scheduled to drop shortly after the content update. There are a few changes inbound, so let’s get to ‘em.

First up, let’s talk about Remnant. The new Relic remake will be making its way into the matchmaking lineup shortly after the map becomes available, and will be integrated into Big Team Battle and Team Halo 2: Anniversary with an increased weighting, to ensure that you have ample opportunity to battle it out for control of the base, Sniper Rifles, vehicles, shores, and wherever else you’d like to set up shop. In Big Team Battle, Team Slayer, 1 Flag CTF, 1 Bomb Assault, and 3 Plots will be available, and in Team H2A, 1 Flag CTF and 1 Bomb Assault will be waiting for you.

Ah, Team Doubles. A fan-favorite gathering of four players who battle to control an arsenal of power weapons that often outnumber them. There’s something special about Doubles, a bond that is created between partners through the ups and downs. But I’ll spare the details, as I think we’re all on the same page: Doubles is awesome, and many of us enjoy going up against two foes with our best friend at our side. So, we’re bringing it back as a permanent playlist, with improved voting options. Also, it will indeed be ranked when we roll out additional rankings.

Overall, the decision to make Team Doubles a mainstay required that some changes be made. For starters, we’ve received overwhelming feedback from all of you stating that it’s at the top of the list for many players. For us, this meant we needed to make it happen. As we mentioned previously, Halo: The Master Chief Collection has a substantial amount of what we’d call “essential” playlists, which doesn’t give us a ton of room to play with. As a result, we’ll need to make some cuts eventually, but for now, Team Doubles will be replacing Team Objective (the current featured playlist), and featured playlists will be put on a temporary hold as we evaluate the health and popularity of all playlists. We’ll keep you updated on findings and updates that are in the pipeline.

As I started to say earlier, after Team Doubles' first appearance in matchmaking, we took some time to really evaluate the voting options, ordering, game types, and more. Thanks to substantial amounts of feedback on the forums, reddit, Twitter, and elsewhere, we’ve made the following changes:

We’re excited to get Doubles back in the mix, and we’ll see you in the playlist. As always, thanks for your continued feedback as we look to improve your matchmaking experiences and create .gifv worthy opportunities for greatness and enjoyment.

Team Objective has been great. It’s provided a wide breadth of content that may otherwise lose the vote against Team BRs on Lockout. We’ve been enjoying it, and we hope you have too. If you haven’t yet hopped in, be sure to do so, as it will only be around for a bit longer. As we mentioned above, Team Objective will be rotated out to make room for Team Doubles, but we’ve also received feedback that you’d like to see increased opportunities to play objective game types throughout matchmaking, so we’re making some changes that’ll make this transition a bit easier, and matchmaking better.

In Halo 2 Classic, Halo 3, Halo 4, and Halo 2: Anniversary, the following changes will be made to voting options in the next playlist update:

Now, this is a significant change, and here’s how we’re thinking about it: For starters, objective game types often lose the vote to Slayer or Slayer BRs due to ties, and this change will default to objective game types in the event of a draw. Slayer BRs will be available in slot 2 and break any Slayer ties, and if the majority of players would like to play a standard Slayer variant, it will be chosen. It’s also worth noting here that if you really only prefer to play Slayer experiences, the Team Slayer playlist ensures that no Flags or Bombs will get in the way of your Killing Sprees, and both Halo: CE and Rumble Pit offer Slayer-heavy experiences.

We’re confident that this update will help improve variety for these playlists, but we’ll be keeping an eye on feedback, and will continue to make adjustments.

As we mentioned previously, the upcoming CU includes with it specific ranking improvements, and we’re looking to add ranks to additional playlists (Halo: CE, Halo 2 Classic, Halo 3, Halo 4, Team Hardcore, and Team Doubles) shortly after the CU drops to ensure that things are working properly. As a reminder, at the time of this playlist update, Team Slayer will also become unranked, in order to ensure that there is a healthy variety of social experiences within matchmaking.

Can we have a few more things?

Yes! Here are a few more things that are on the way:

Season 2 of the Halo Championship Series continues with the next online tournament this weekend. If you haven’t yet, be sure to sign up for HCS Cup #3 presented by ESL - $3,000 are up for grabs, as well as HCS points. To see the latest standings, head here, and to watch the top teams stream on Sunday, head over to the MCC page on the Twitch directory, or stay tuned to Twitch.tv/Halo for a curated selection of hosted streams.

Since the start of Season 2, we’ve been working with pro players to fine tune the map Shrine, specifically in regards to Red vs. Blue balance as it pertains to spawning and line of sight discrepancies. While some Halo Championship Series pro players have had time to test out this map, we wanted to open up the final stage of testing to the rest of the HCS competitors and fans. To get the full details on what’s been changed as well as instructions on downloading the map, head here.

That should do it for this update. Have a happy and safe holiday weekend, and we'll talk again soon.

p.s. Be sure to check out today’s Canon Fodder! 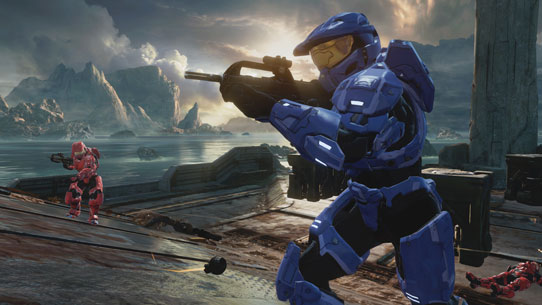 As I put together the very blog you are reading, the upcoming content update, the addition of the Halo 2: Anniversary map Remnant, and the Halo 3: ODST campaign enter the final stages of the certification process. Over the past few days, you may have seen ODST appearing in the Xbox Store with placeholder dates, as the Xbox team has been running final redemption tests. We’re currently working closely with the Xbox Live team to finalize exact timing and availability, and will provide an update... 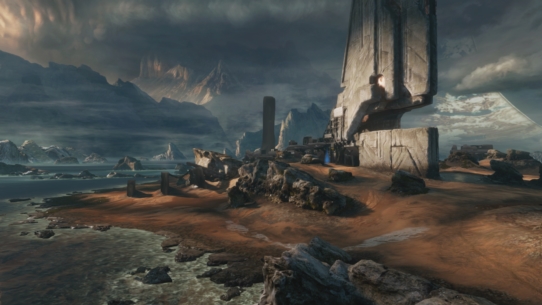 As we get closer and closer to the end of May, the weeks start to blend together. The days get longer, news and announcements slow down quite a bit, and teams across the studio focus in on upcoming experiences. For the Halo 5: Guardians team, this means perfecting the polish and presentation of new, never-before-seen goodness that awaits. Across the studio, the MCC team hammers away on upcoming game updates.

Over the past few weeks, the sun has slowly began to make its way back over to the greater Seattle area, indicating that things like summer, sunshine, and warm-weather expeditions are all on the way. One particular annual warm-weather journey is that of E3, and I do believe many of us are already on board a variety of fast-moving hype trains, most of which are not equipped with brakes.