The Columbus Finals provided fans with three days of unique stakes; Friday opened up the action with Pool Play, which not only set the seeding for the tournament’s Championship Bracket, but, perhaps more importantly, secured eight of the available nine spots remaining – two from each of the four groups in Pool Play – for the HaloWC Finals in Seattle.

As Friday came to a close, the eight teams to punch their tickets to Seattle were Splyce, Team EnVyUs, Team Reciprocity, Oxygen Supremacy, Renegades, Elevate, Str8 Rippin, and the newly-renamed defending world champs at tox (formerly OpTic Gaming). Perhaps the biggest surprise resided with a team that didn’t make the cut, as a talented lineup for Oceanic failed to compete at the level many fans were expecting and ended their tournament without even making the Wild Card playoff.

Saturday provided spectators with two scintillating storylines to follow, beginning with the Wild Card playoff to decide the final North American entrant into the HaloWC Finals in Seattle. Armada Esports, Mentality, Top Prospect Clan, and Wise Gaming all looked to snatch that Cinderella spot for themselves and complete the dream of competing on Halo’s highest stage.

In the semi-final round, Armada Esports and Wise Gaming would move on thanks to victories over TPC and Mentality, respectively. In the Wild Card Finals, Wise made a big statement with a Game 1 CTF victory that saw the squad capture all three flags in barely a minute’s timeframe. Despite impressive resilience by Armada, when the series wrapped up, it would be Wise that took the best-of-five battle to the tune of 3-1. With the victory, Wise Gaming’s lineup of Nebula, Gilkey, Commonly, and D3mon D become the sixteenth and final entry into the Halo World Championship 2018 Finals.

The Wild Card playoff wasn’t the only action on hand for Saturday though, as the Columbus Finals’ relentless onslaught also included Championship Bracket play, with teams jockeying for position heading into Sunday. The battles were intense, particularly in the Elimination Bracket, which saw both first-round series go the distance – first with Oxygen Supremacy clutching up for a Game 5 win against Elevate, then with Team EnVyUs rattling off a ridiculous reverse-sweep over Str8 Rippin after Str8 dominated the series’ opening two games.

In the Winner's Bracket, the defending champs at tox proved they haven’t remotely moved beyond their prime yet, moving all the way into the Winners Finals with a string of impressive wins. One of those wins came against top-seeded Splyce, who couldn’t quite overcome both unusual late-game miscues and a momentum-fueled tox lineup, falling into the Elimination Bracket and setting up a much tougher journey back into the Grand Finals.

Heading into Championship Sunday, many eyes were on Reciprocity, who’s all-star squad seem to finally be hitting both their stride, and all their shots, at just the right time. Coming off an impressive string of performances all weekend, Reciprocity (pictured below) found themselves opening up the final day’s action by taking on tox in the Winners Finals. Despite strong individual performances, Reciprocity couldn’t quite match the finely honed and well-oiled machine that is a Snakebite+Lethul+Royal 2+Frosty combo. tox would take the series 4-1 and ride a wave of deep-seated community support all the way to the Grand Finals. 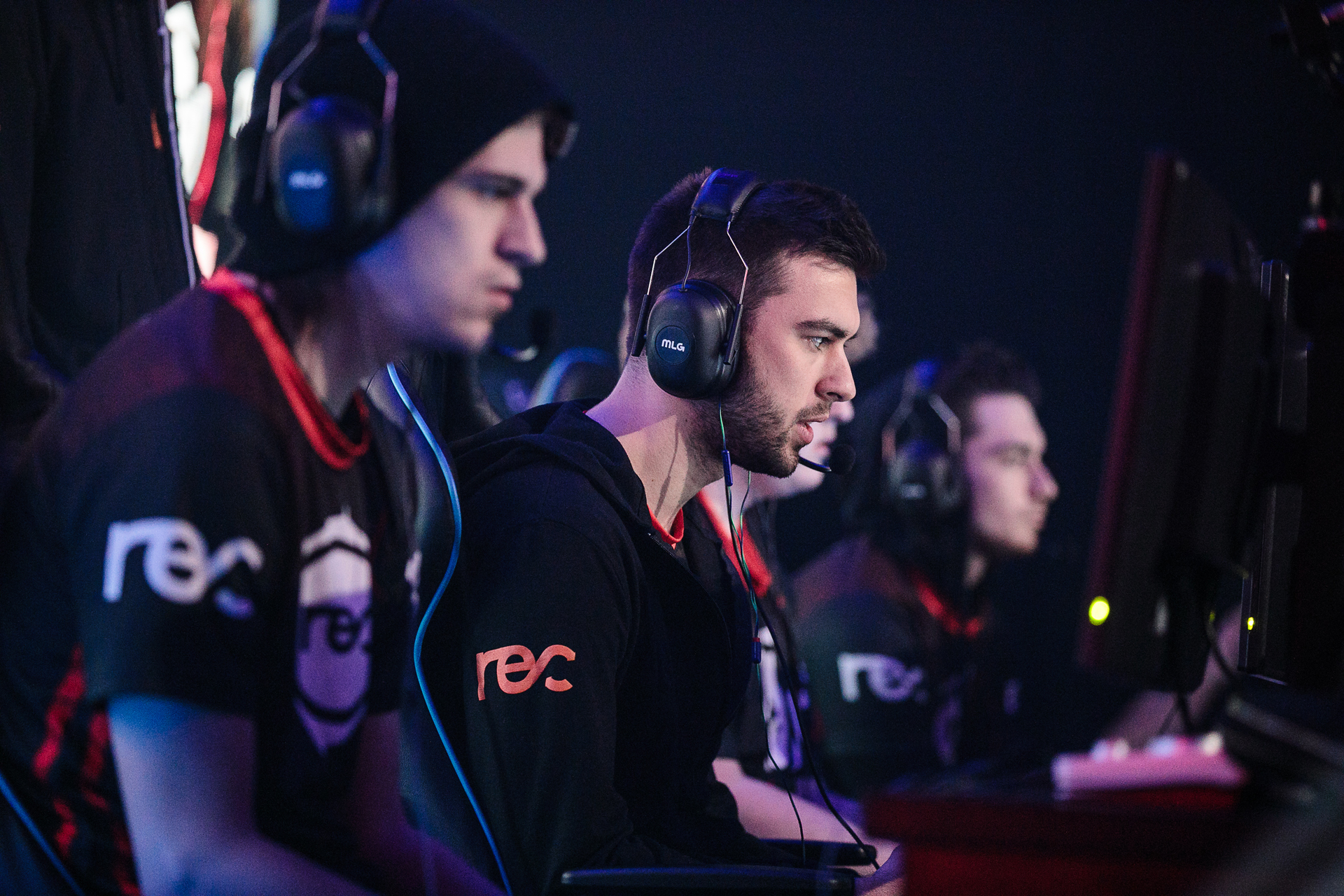 In Round 3 of the Elimination Bracket, Splyce completed a sweep of nV, though the final tally was certainly closer than the scorecard might initially indicate, as Pistola and company gave Splyce a run for their money in a losing effort. In the Elimination Bracket Finals, Team Reciprocity put the crowd on notice as they took two games off Splyce thanks in large part to some incredible plays by Snip3down. In the end, Splyce would prove just a bit too strong, but Reciprocity leaves Columbus with both a fantastic Top 3 finish and strong momentum heading into Seattle.

The Grand Finals featured a rematch between two teams that in many ways bookend the Halo 5 esports legacy – the defending two-time world Champs at now-tox, and the dominant new blood of Splyce. While each successive game was intensely fought and close-finishing, the final scores kept showing the same young yellow and black logo coming out on top as Splyce completed an unprecedented 4-0 sweep of tox to reset the bracket to one final best-of-seven series.

The second series proved to be even more tightly-contested than the first, with Splyce taking a fifth straight win to open the series 1-0, but with tox answering right back, sating their hunger with a furiously prepared steak dinner victory in Team Slayer on Regret to even up the series. However, while youth may be wasted on the young, the opportunity to close out the series for Splyce was not, as Shotzzy, Renegade, Stellur, and Eco rattled off incredible performances to match the intensity of tox. A dominating 100-33 Strongholds victory on the Rig was sandwiched between two epic finishes on Coliseum – Game 3 a back-and-forth CTF affair, and Game 5 a down-to-the-wire Slayer victory to take both the series and the tournament. 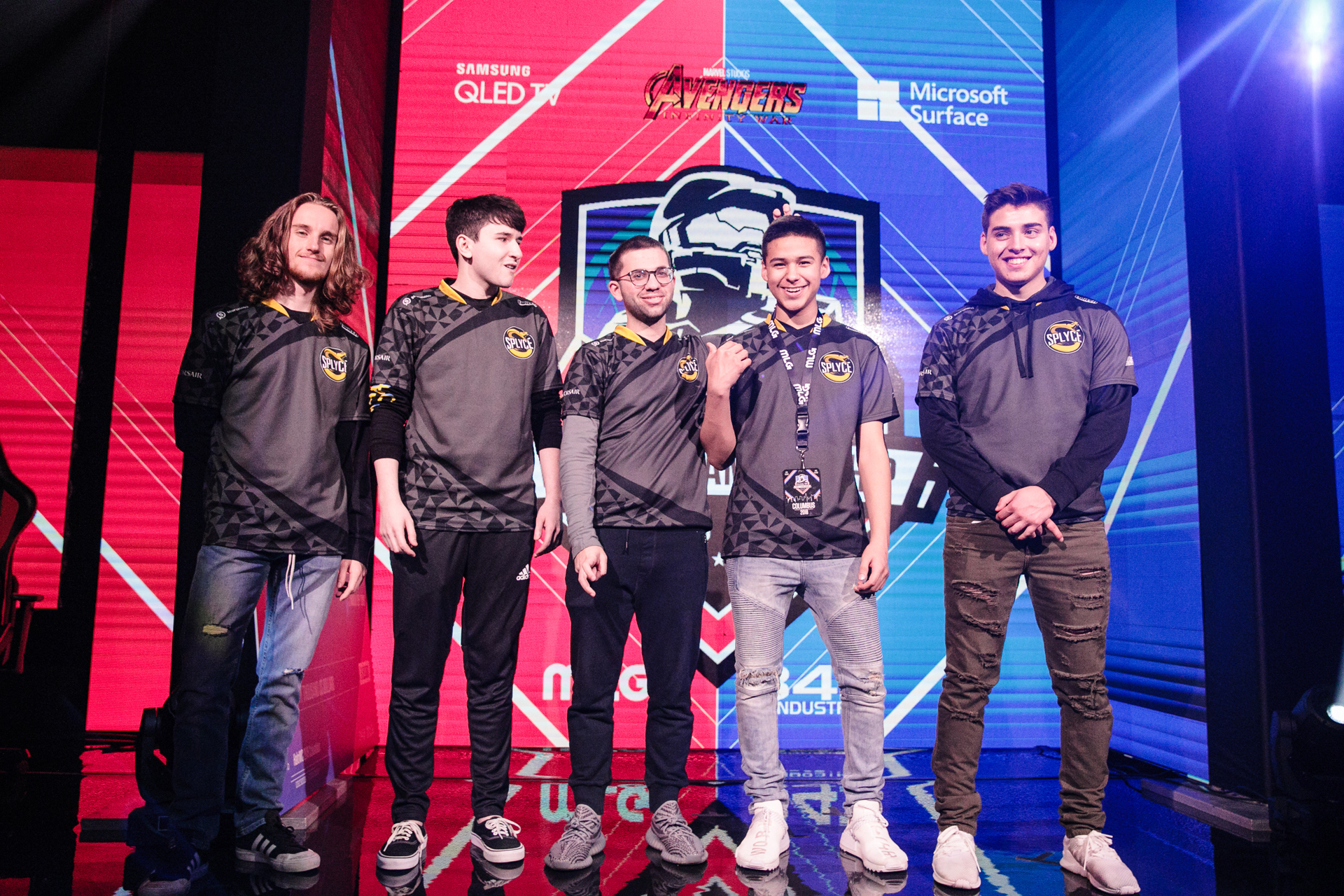 With their victories in the HCS Pro League Summer 2017 Finals in Atlanta, the HaloWC 2018 Orlando Open, and this weekend’s HaloWC 2018 Columbus Finals, Splyce now has won back-to-back North American titles, and three out of the last four majors. 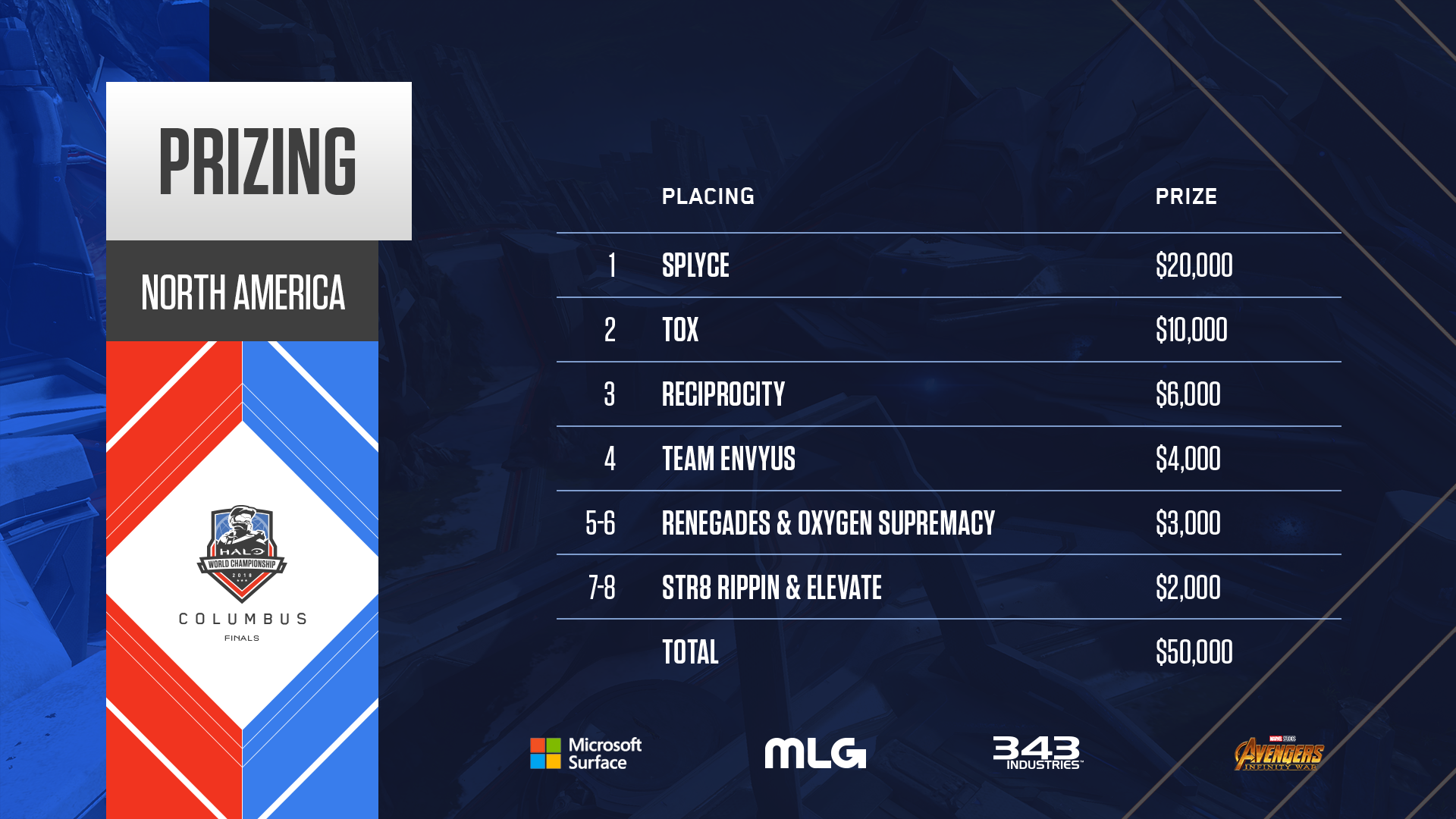 NEXT UP: HALOWC FINALS – SEATTLE

Following those epic Grand Finals was the live drawing for the Halo World Championship groups, which will determine Pool Play for the HaloWC 2018 Finals in Seattle. The sixteen teams from all the major regions are divided into four groups, with four teams in each group. Let’s see how things shook out. 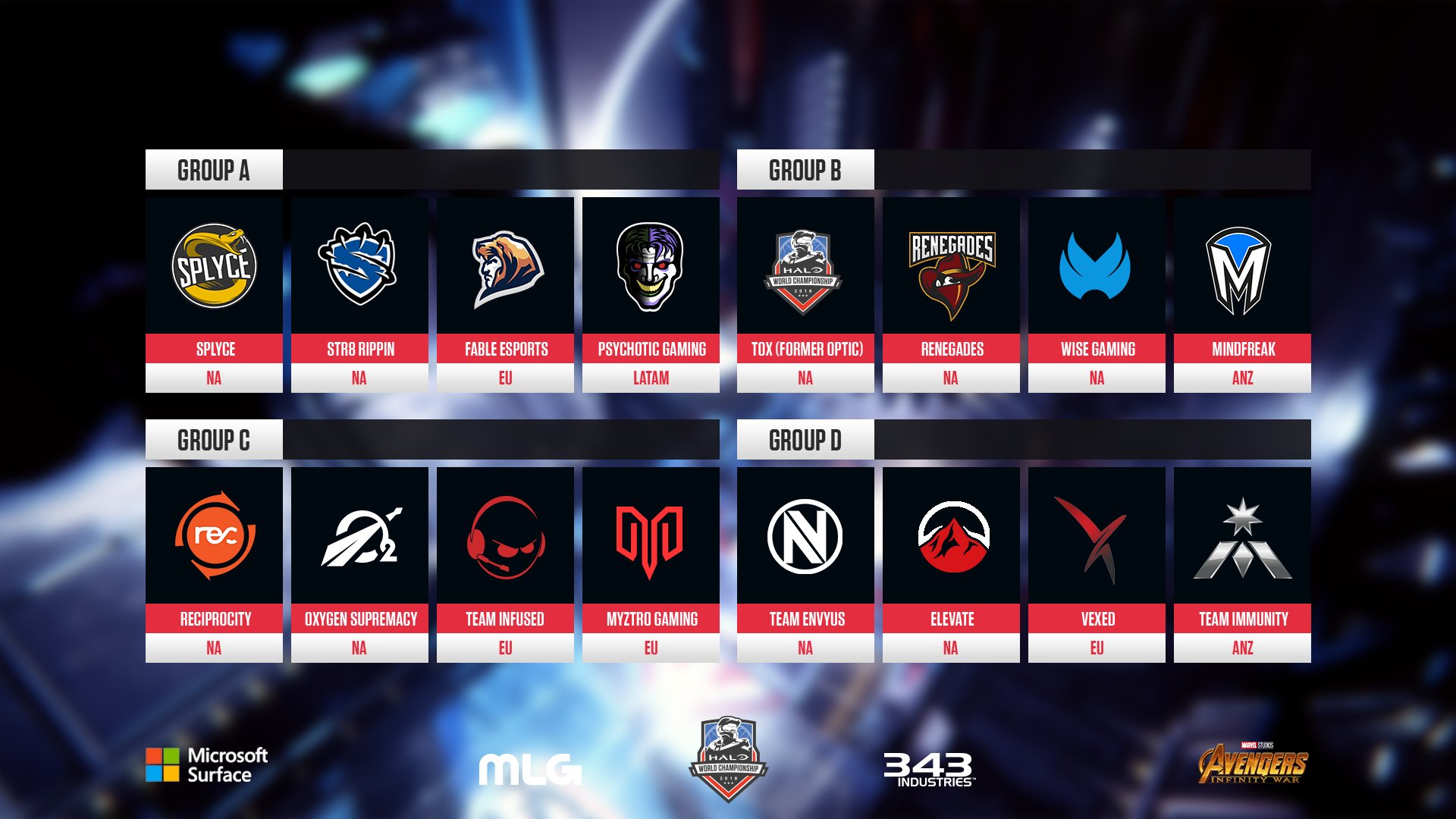 We want to hear your predictions for each group! Tweet at @HCS using the hashtag #HaloWC.

We can’t thank the fans and our partners at MLG enough for helping make this event a truly memorable event for everyone involved! Up next is, the big show itself: the Halo World Championship 2018 Finals, April 13-15 at the Century Link Field Events Center in Seattle, where the best teams in the world will battle to fight for Halo esports’ biggest prize. 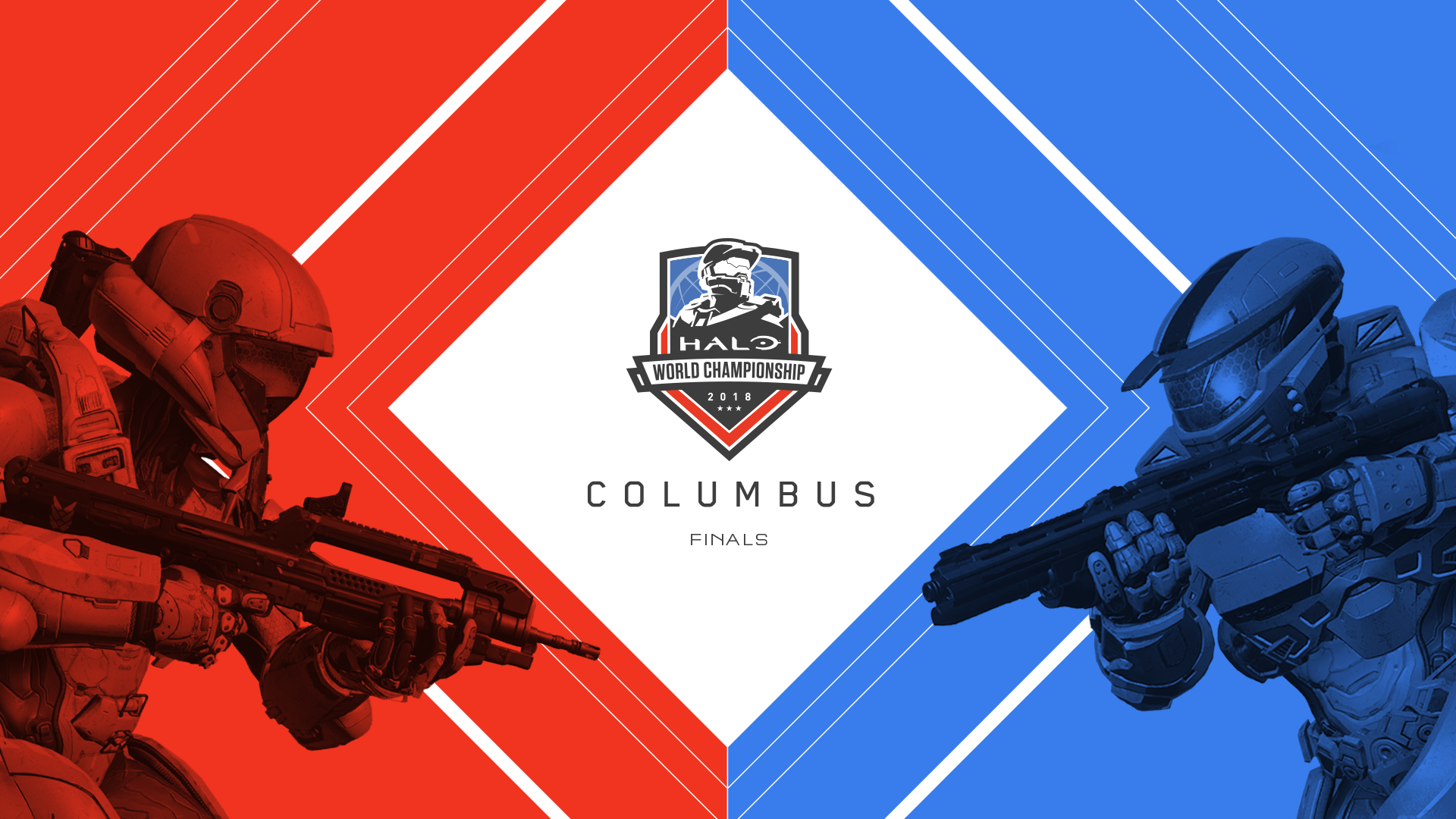 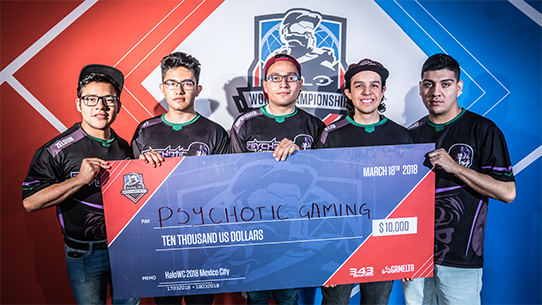