After two incredible and action-packed events in Halo World Championship 2017 and HCS Daytona, the HCS Pro League by ESL is primed and ready to get back underway with the opening week of the Summer 2017 Season. The combination of new competitive settings, new faces, and a tantalizing season finals at Dreamhack Atlanta have fans of all walks chomping at the bit to see what this next chapter of Halo esports will hold.

While OpTic Gaming are the current reigning – and repeat – Halo World Champions, it’s Team EnVyUs that defends the titles of both the last big event – HCS Daytona – and the last HCS Pro League Season, as nV took down OpTic at the Fall Finals 2016.

However, while all eyes may inevitably turn towards the “big two” at the top of the standings, recent changes in both game settings and team rosters should have fans keeping a very close watch on the rest of the field, as the standings can swing on the smallest misstep, or biggest clutch play. One thing is for sure, we can’t wait to get it all underway this week.

Following their impressive respective showings at HCS Daytona, it came as a surprise to few that this past weekend’s HCS Pro League Last Chance Qualifier (LCQ) came down to Splyce and Oxygen Supremacy. What was surprising was the unbelieveable level of competition on display that made both Splyce and Oxygen Supremacy’s road to the Grand Finals anything but pedestrian. Squads like the Brownies and the alphabetically acclaimed ABCDE gave viewers a fantastic show, despite eventually falling just short.

In the Grand Finals, Splyce fought off an inspired performance by Oxygen Supremacy. The series shifted dramatically on an incredible 3-2 comeback victory by Splyce that turned what would have been a 3-1 series deficit into a momentum-swinging 2-2 tie. From there, Splyce turned everything up to eleven, rolling through Truth Slayer and Empire Strongholds in Games 5 and 6 respectively to punctuate a 4-2 Grand Finals victory that sent them to the North American HCS Pro League for the Summer 2017 Season.

Week 1 matches for North America kick off on May 24, and right out of the gate we’ve got an amazing slate of head-to-head battles to keep tabs on, as new lineups and old rivalries collide, with each squad wanting to start the Summer 2017 Season off with a W. Punctuating the opening salvo of competition is our Match of the Week, which sees the next chapter in the OpTic Gaming vs Team EnVyUs rivalry unfold on Thursday, May 25. Let’s take a look at the full schedule: 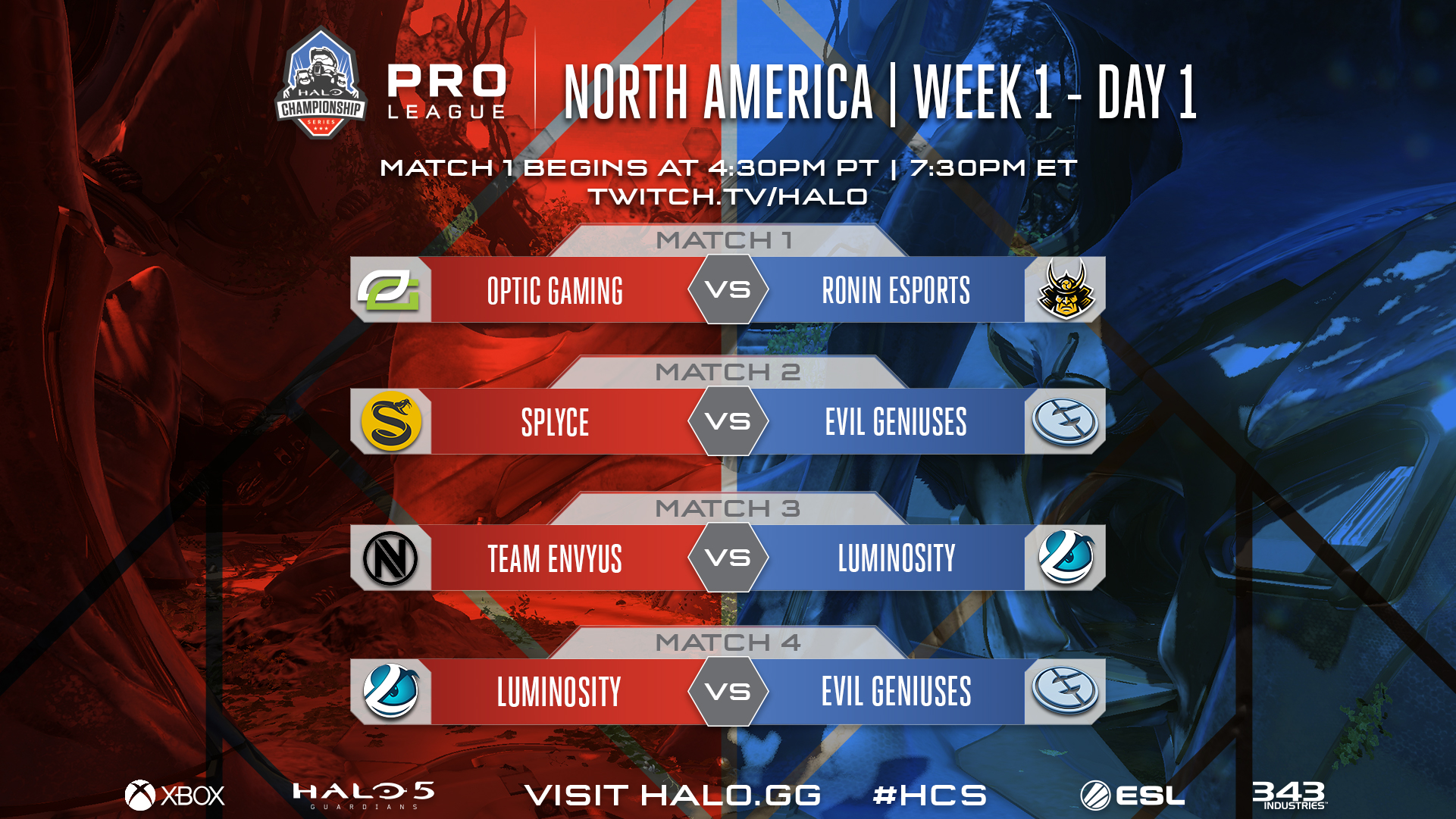 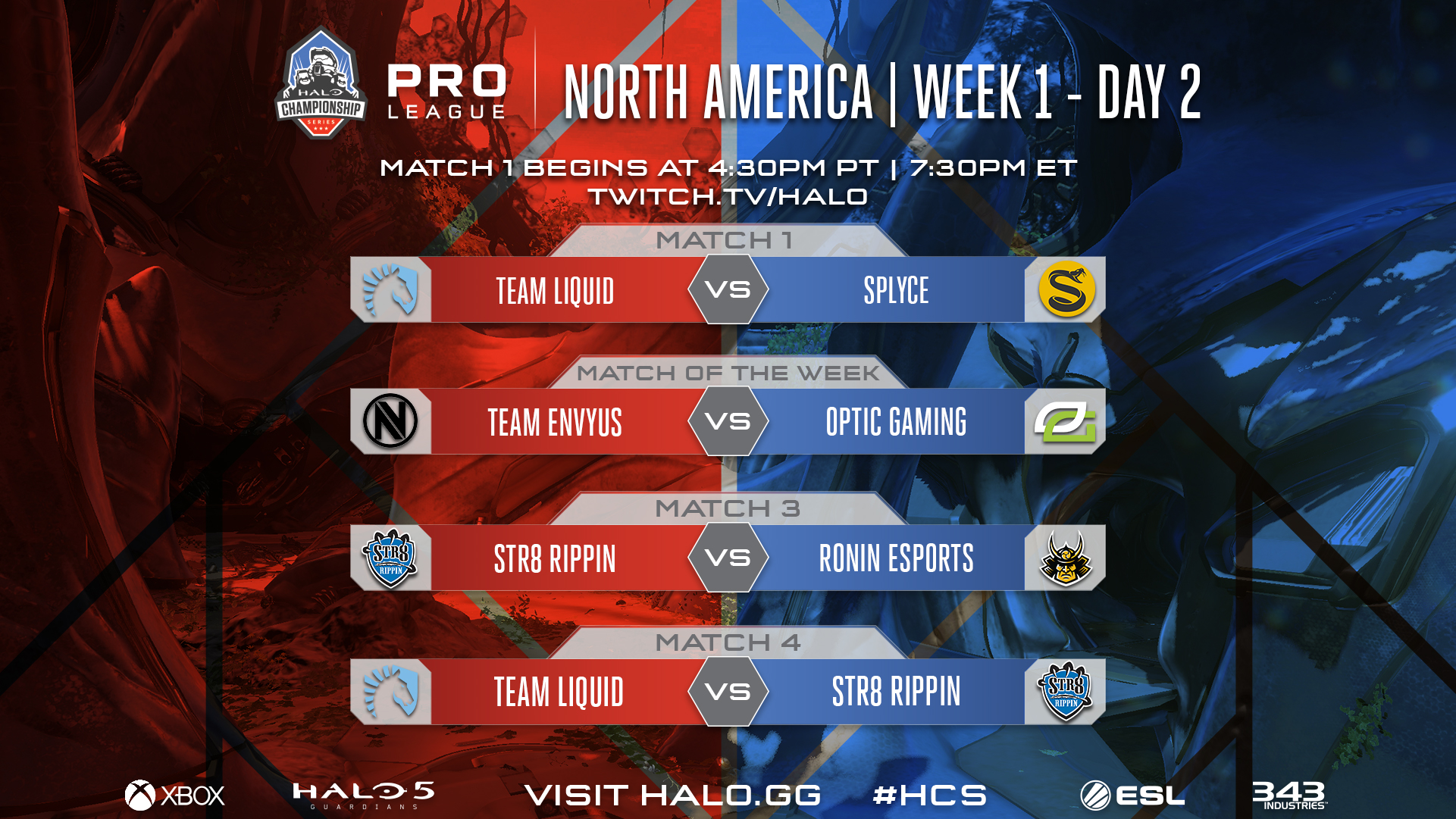 Catch all the action streamed live on beam.pro/Halo & twitch.tv/Halo, with veteran Halo stalwarts Tsquared and Elamite bringing it all to life from the booth.

In cased you missed it, HCS Daytona was just the beginning of an exciting slate of Halo esports this summer. Here's a reminder of what lies ahead.

To make it even easier to keep up with your favorite squad, we've put together a collection of team-specific schedules – be sure to reference these when getting ready for each week’s matchups! 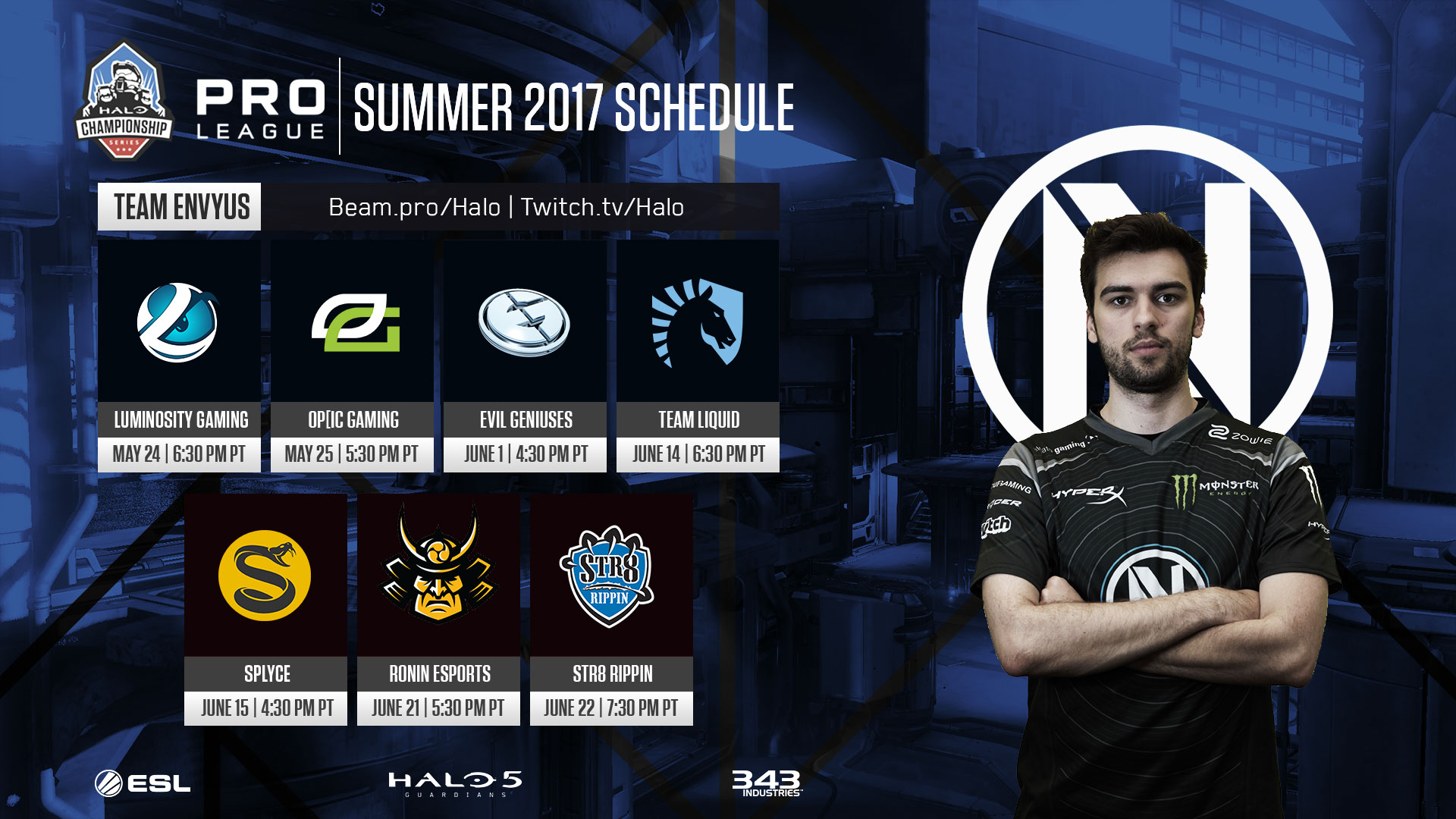 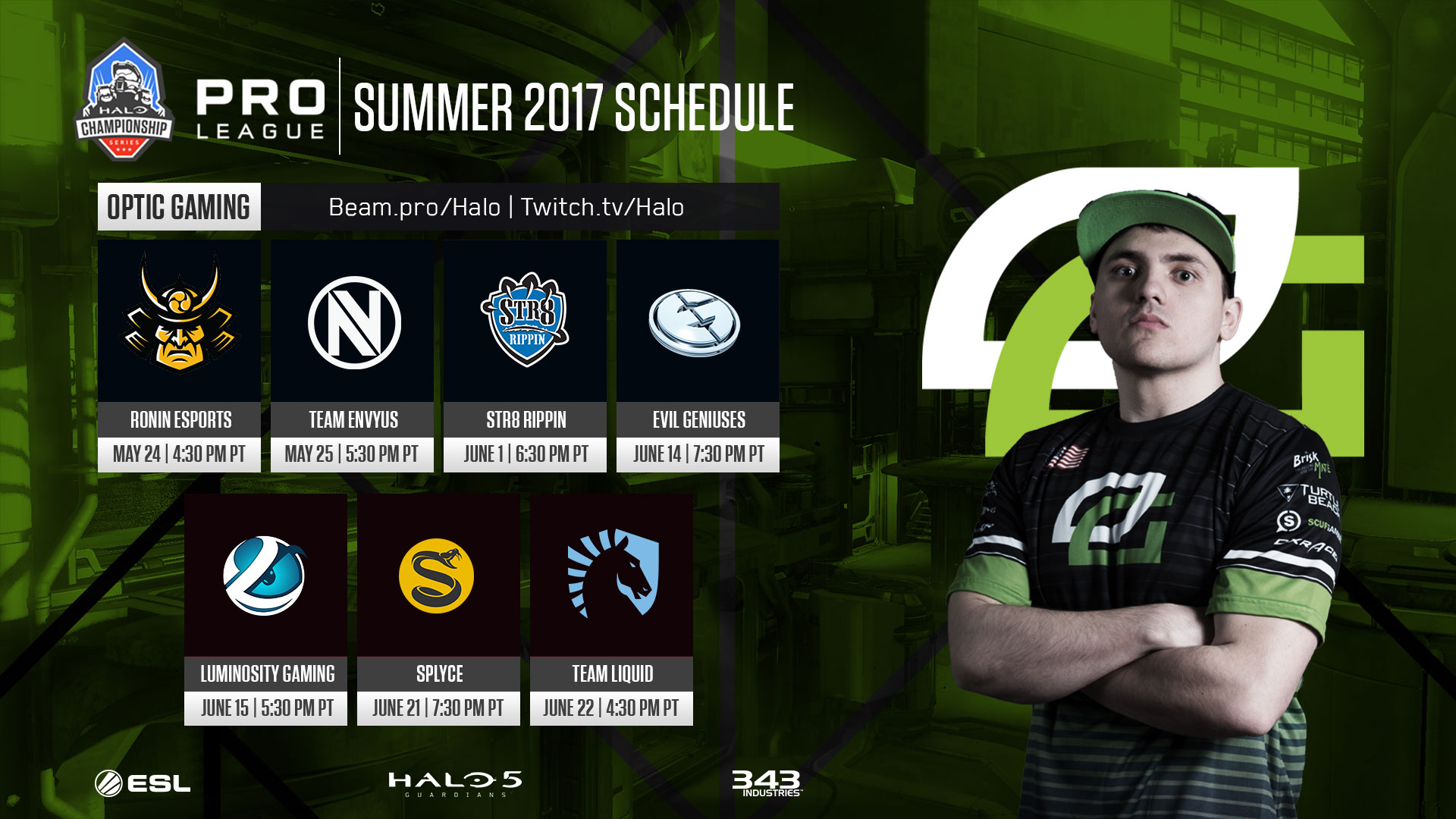 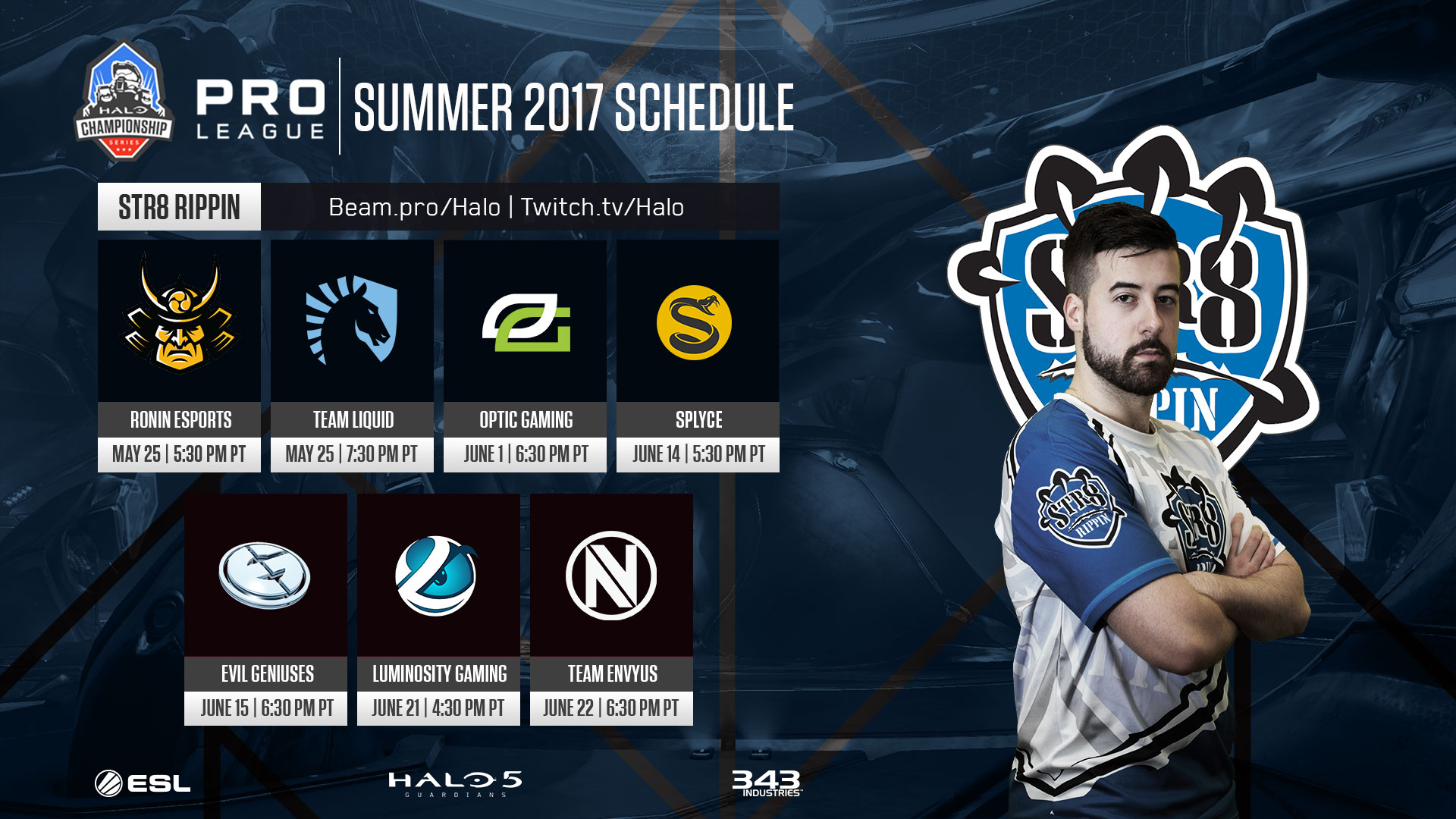 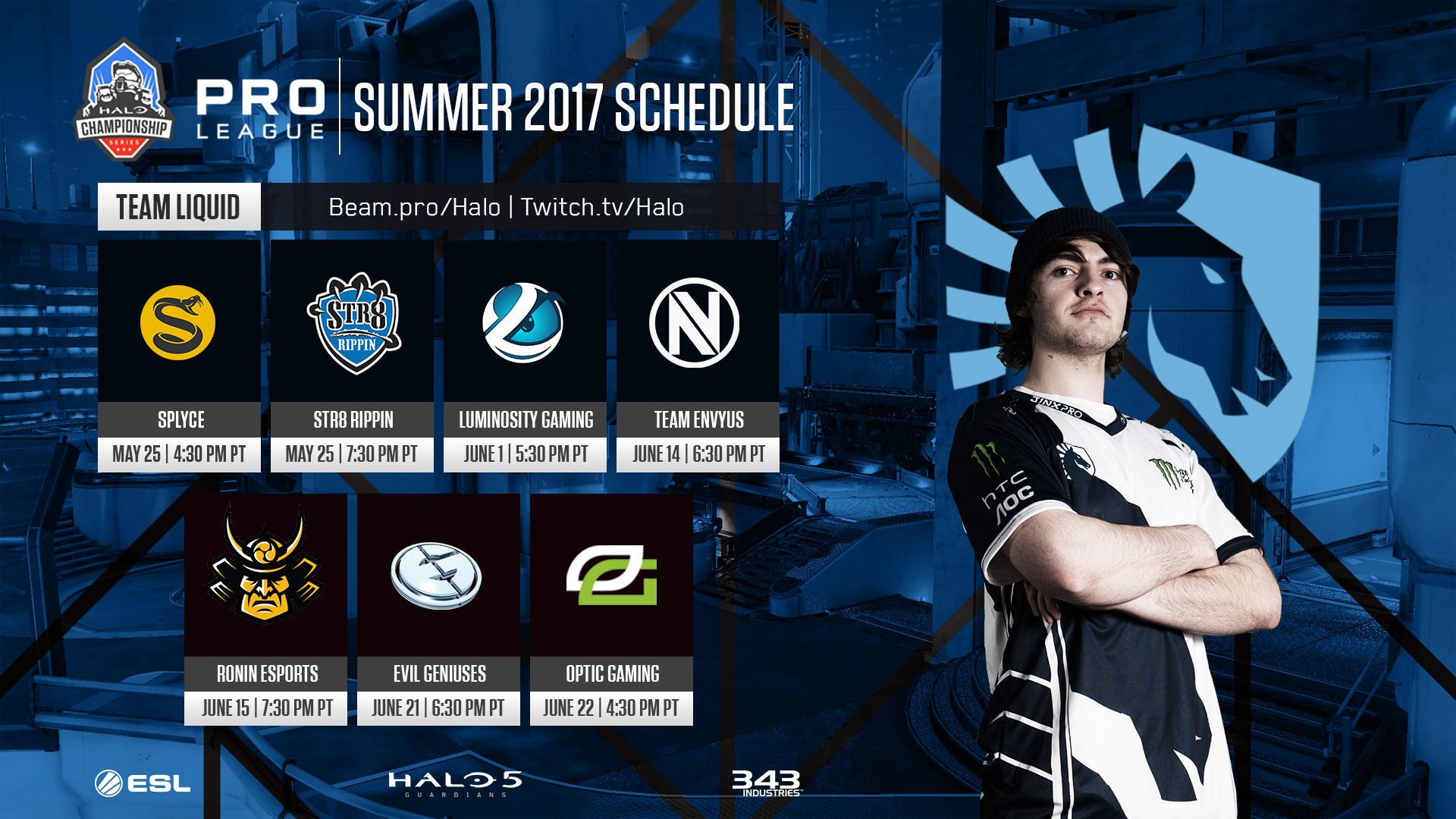 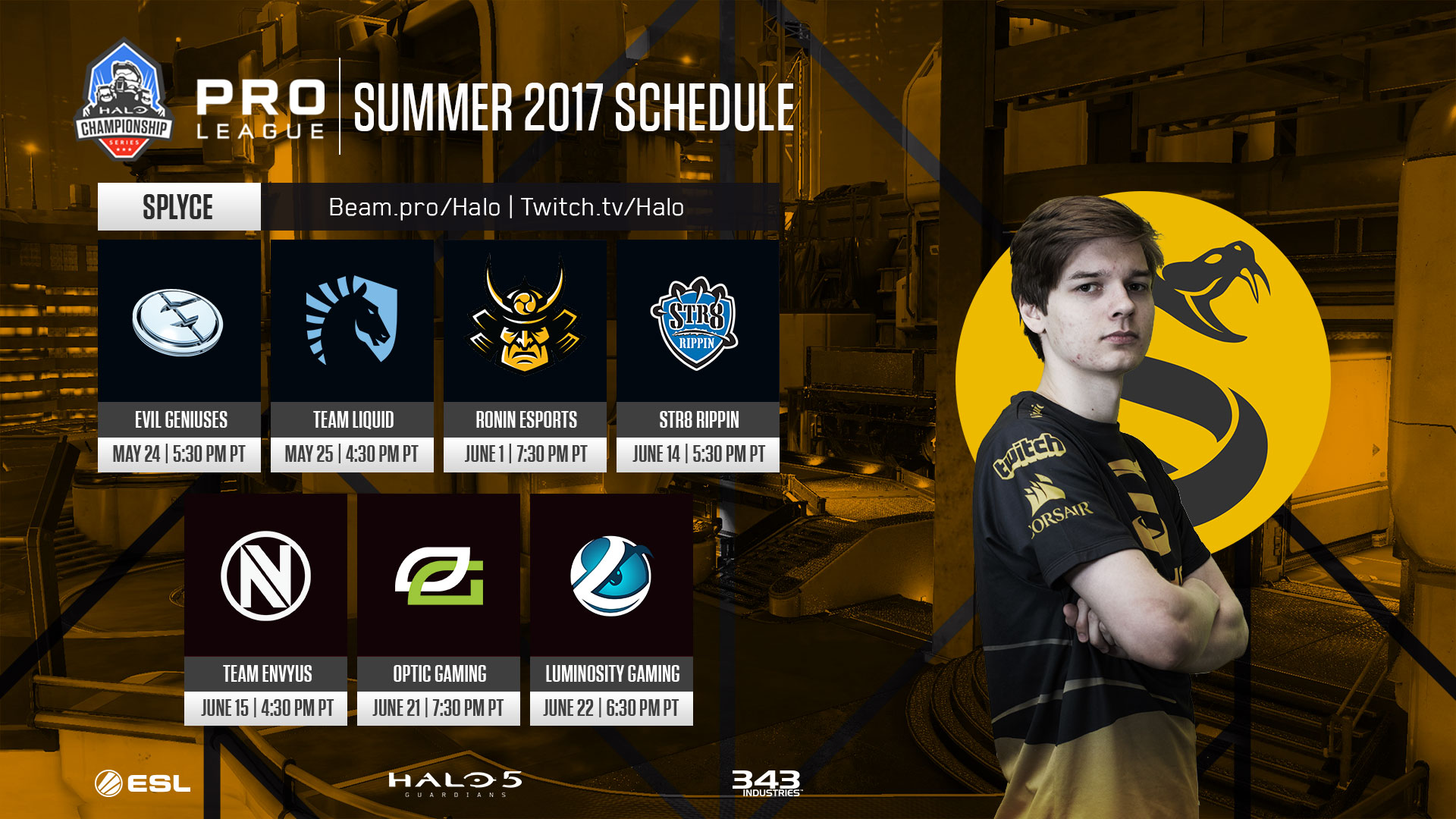 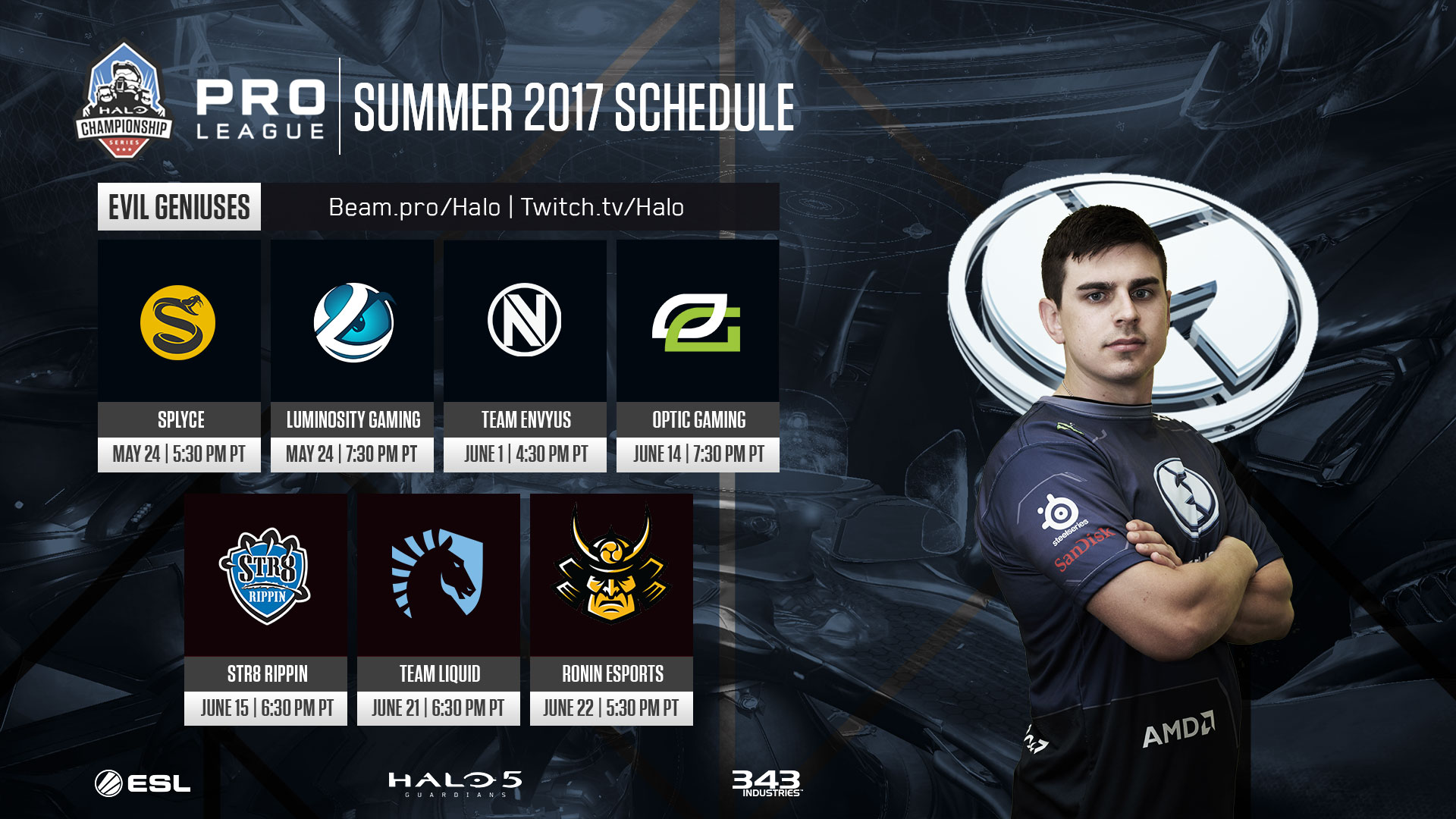 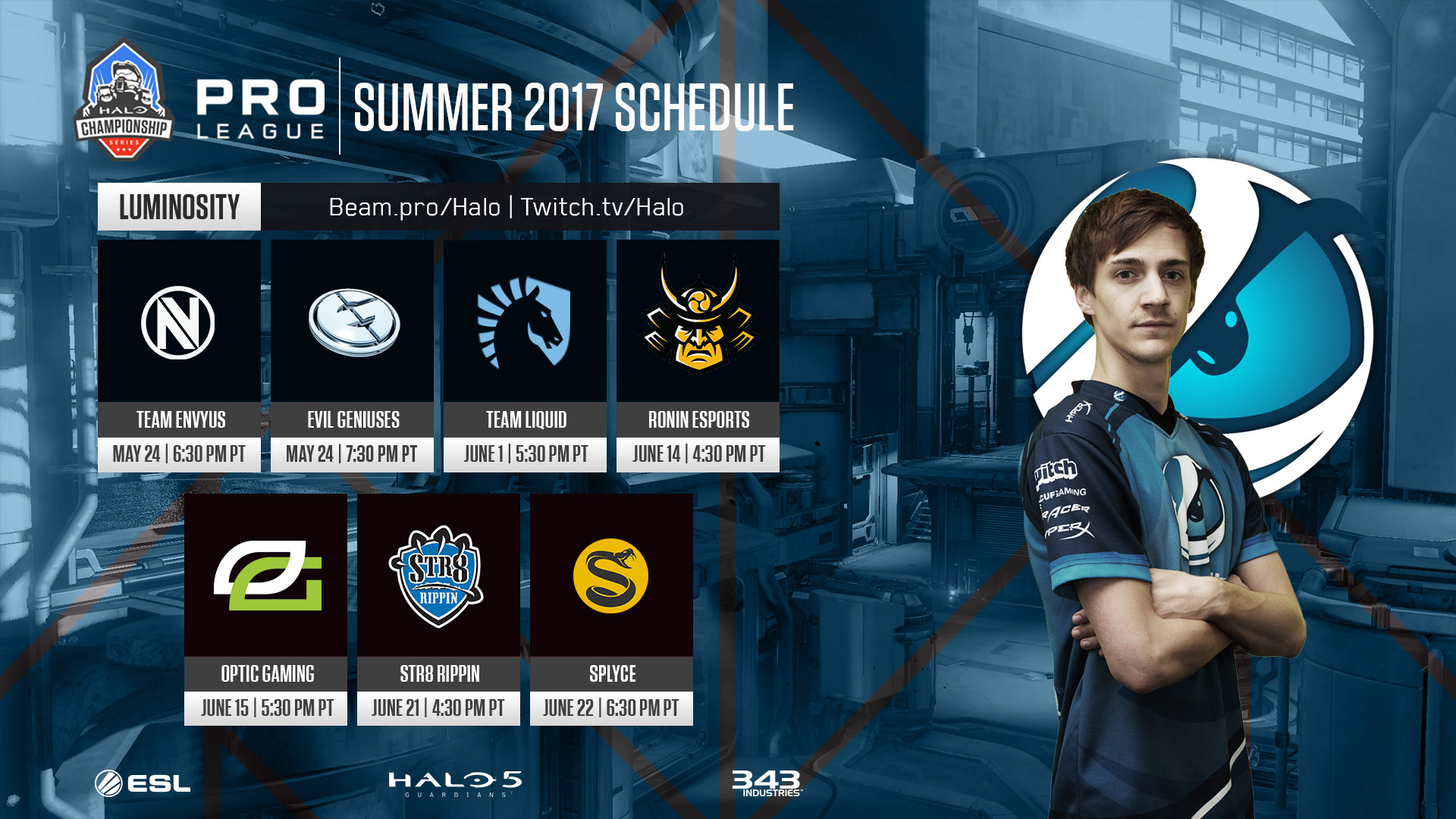 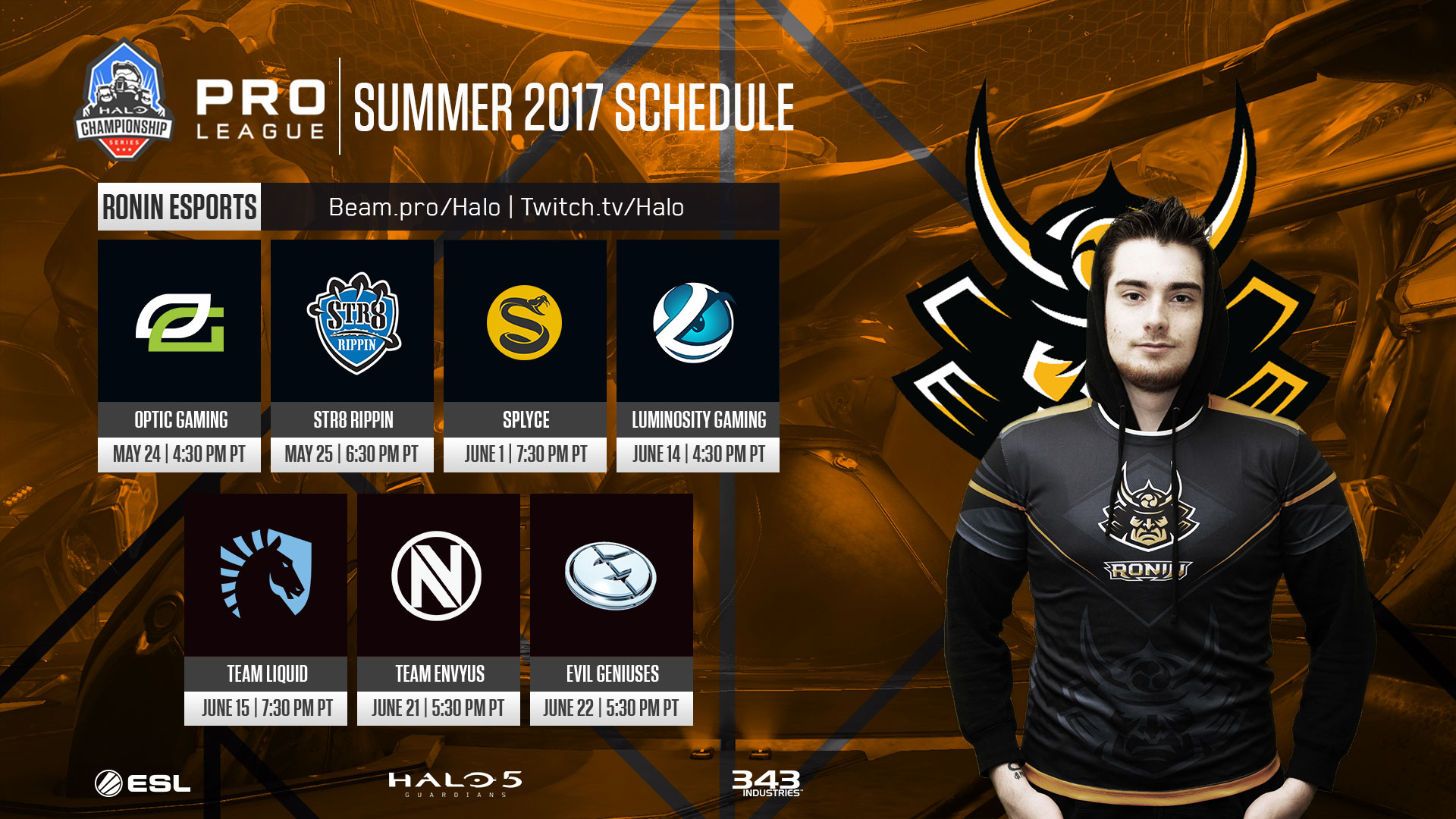 As always, for all updates on the Halo Championship Series and Halo esports, follow @HCS and @ESLHalo on Twitter, and keep it locked to Halo.gg and ProLeague.com/Halo on the web. 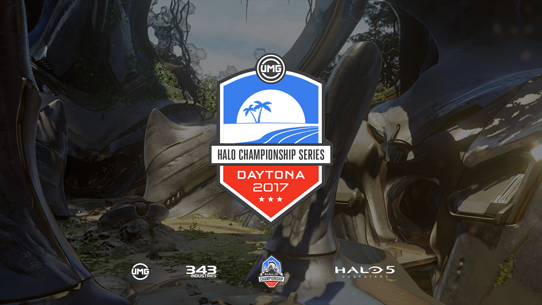 HCS Daytona is officially in the books, and the beach-side battle did not disappoint in the slightest, bringing us a wild weekend of incredible matchups. The sunshine state storylines were infinite and epic, with both veteran champions and surprising new blood delivering some magical moments for Halo fans everywhere. 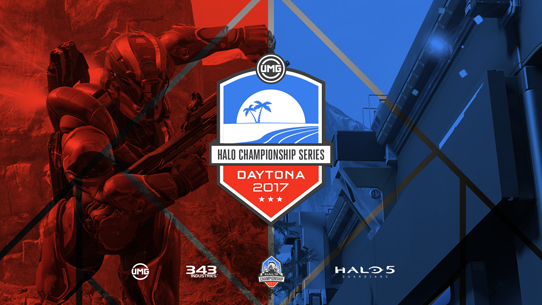 They say if you hold a conch shell to your ear, you can hear the ocean. These days, we’re pretty sure the same thing happens when you don a set of Astros and hop into some Halo 5 Arena play – indeed, Florida fever has struck 343 with HCS Daytona by UMG closing in on our schedule’s shores next weekend, May 12-14. 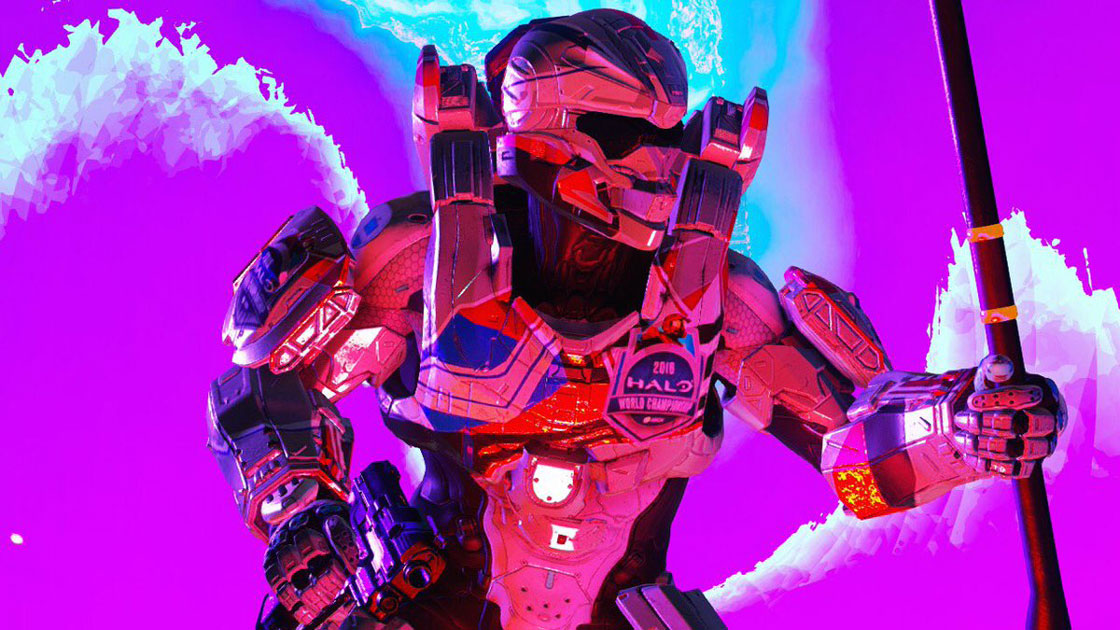