Joel Corelitz – Through the Trees

To realize our ambitious vision for Halo Infinite, 343 Industries music supervisor Joel Yarger has assembled a trio of talented composers to develop stirring, emotional melodies that blend their unique styles with nearly twenty years of iconic motifs. Today we're ecstatic to introduce you to our third, and final, composer helping to bring the music of Halo Infinite to life - Joel Corelitz! "Joel C," not to be confused with "Joel Y," joins our two other composers Gareth Coker and Curtis Schweitzer for a Halo Infinite musical trifecta.

Enjoy this exclusive track by Joel Corelitz, "Through the Trees," while you get to know a bit more about him and his process.

Hi Joel, on behalf of the community, welcome to Halo! Thanks for taking the time to chat with us today. To kick things off, can you tell us a bit about yourself and your background?

In many ways, playing games kicked off my musical career! I’ve been a gamer since the 8-bit era and have always loved the music and the sound of those old systems. Their unique, electronic sounds inspired me to learn about synthesizers. I’m a huge synth geek and it’s always been a big part of my sound. Growing up, I also played piano, dabbled in guitar, and experimented with recording – all of which eventually led me to study music. After school, I composed for a lot of different things: commercials, short films, and eventually, games, which I’d always wanted to do. Working on a series as beloved and iconic as Halo feels like coming full circle – a return to the medium that initially inspired me.

How did you come to find yourself composing for Halo Infinite? What drew you to this project?

Joel Yarger, 343’s music supervisor, reached out and said they were looking to add some different flavors to Halo Infinite’s score and that my approach of fusing modern synthesizer sounds with orchestral music could fit the bill. I composed a few demos, and then we revised them together over several rounds – discussing what tweaks to make so they would fit more into the Halo universe.

To me, that revision process is just as important as the core idea – so much of what I do as a composer is about exploring, sculpting and refining. Luckily, both the core idea and the process worked out, because after a few weeks of working together, Joel said he’d love for me to join the project.

Halo has a rich history of iconic and timeless music. Do you have a particular favorite track or piece that stands out to you?

There’s so much to choose from! Halo’s musical identity is so multifaceted, but if I absolutely had to pick a favorite, it would be “A Walk in the Woods.” To me, it’s the perfect mood for how it feels to move around in the world of Halo. It perfectly describes its incredible, majestic environments. 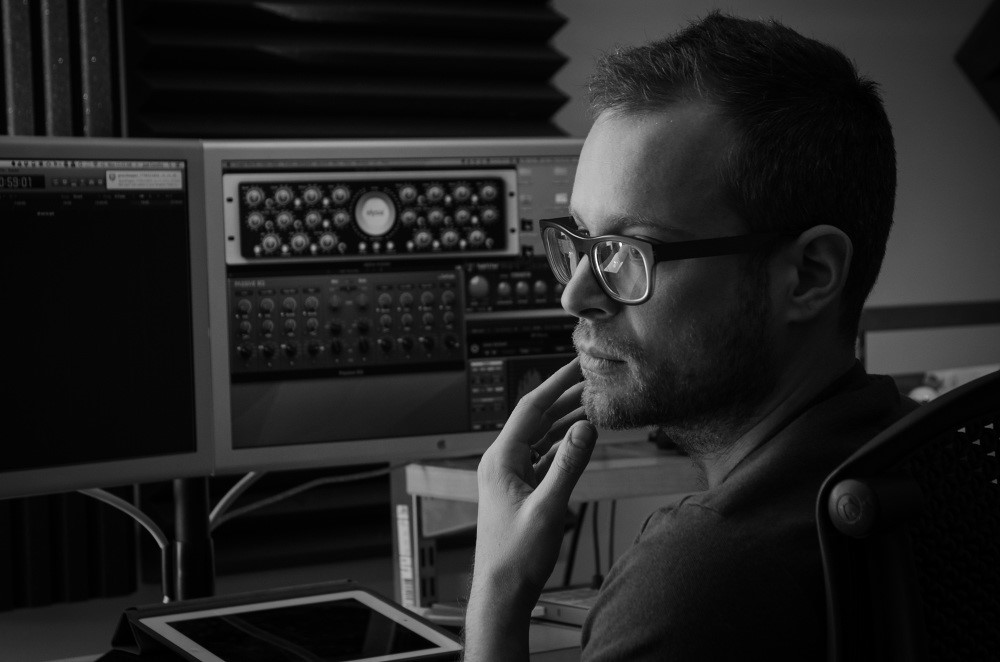 We’ve asked Gareth and Curtis this as well – but how do you approach creating new music for a game with such a beloved legacy? How do you strike a balance between familiarity and newness?

This kind of balancing act is one of my favorite things about composing. Halo has a very strong musical identity. So strong, that you could hear just a few seconds of a Halo score playing from another room and recognize it. Figuring out where my own music sensibilities complement Halo’s established sensibilities was a process – almost like learning a new subset of music theory. I had to learn Halo’s musical rules so well that they became instinctive. There’s a famous Charlie Parker quote: “First you learn the instrument, then you learn the music, then you forget all that s**t and just play.” And that’s sort of what it felt like. I had to internalize the rules so I could let the sound of the Halo universe flow naturally into my creative process.

One characteristic that Joel cited from my other work that he wanted to include in Halo Infinite’s score is the use of unexpected chord progressions. And Halo’s established and beloved motifs are perfect for doing this kind of thing. By adjusting their structure or harmonizing them with a different chord, they can feel familiar and brand new all at once. (More on this later.)

How does working on Halo Infinite differ from the other games and projects you’ve been a part of?

This is the first time I’ve worked on an existing series. And Halo is a series I’ve played from the beginning. I know and love its music as a player. Being able to pull from Halo’s rich musical identity as a composer – to integrate its themes and express them in my voice was a new experience and a real honor. And having all of Halo’s themes at my fingertips was a constant source of inspiration and a lot of fun.

Halo takes place in a sci-fi universe, but this isn’t sci-fi music. There’s a lot that makes the Halo universe musically unique – but if I had to sum it up, it would be that Halo’s score revolves mostly around Master Chief. He’s always calm, confident and never rattled. And the music reflects that. It’s positive, inspiring, open. We’re often asking the orchestra to play very softly and the choir to sing very quietly. And if it ever gets moody, or more intense there’s a very significant reason for it, and that makes it much more impactful.

What’s it been like working with two other composers on this project? How are contributions and work split up between the three of you? Do you each have a particular theme or “type” of music you’re focusing on?

It’s been an honor. I know and love both of their work. We haven’t gotten a chance to hang out in person yet – one of the downsides of working on a project during a global pandemic! But I’ve had the privilege of hearing their work during our recording sessions and witnessing their commitment to their musical vision has been incredibly inspiring.

What Curtis did with the Monk Chant blows my mind. It’s stunning. And the melodies and themes Gareth has come up with for Halo Infinite’s characters are as iconic as anything else in the series.

Many of my contributions to the score lean fairly heavily on synth sounds, and are often hybrids, where choir and orchestra are used for flavor, rather than being the focus. There are a few more surprises I can’t mention yet, but I think fans will love it.

Being a composer is often a solo experience, but I love working with a team. And with a variety of different perspectives on this score, I think we’ve expanded the universe that much more. It’s also the first time in my life I’ve had to use my last initial to distinguish me from another Joel, haha! Joel Yarger’s feedback has been paramount to my contribution to the score. I feel like a better composer because of the process we’ve gone through together – something I feel like is always true of my favorite projects.

Where do you draw inspiration for your work? Do you have a specific process or ritual you follow?

What’s something most folks might not consider or know about regarding composing music for a videogame vs. other mediums?

What’s special about composing for games is that the music needs to feel more than just a score, or background music. It has to feel like a living, breathing part of the world. It isn’t always played back as a loop, or in quite the same way twice, depending on how the player moves through the game. And knowing how the music will live in the game influences a lot of compositional decisions I make, because I’m always thinking about how the score will sound when it’s played in a non-linear way.

What can you tell us about this music track we’re featuring today?

“Through the Trees” is my interpretation of “A Walk in the Woods." This piece was the perfect opportunity to recontextualize an existing piece with an unexpected chord progression. Here’s an example. 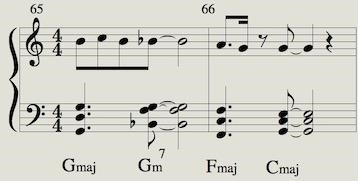 Because the first two chords are Gmajor and then Gm7, we’re sort of in both major and minor modes, which is just cool by itself, and part of the reason I love this piece. The melody (in treble clef) ends on G, supporting Cmajor, which is made up of C-E-G. Because the G is in the bass of our CMajor chord, we’re gently pulled back to Gmajor, and the beginning of the melody, priming it for a repeat.

Except when we repeat, I do this -

It’s exactly the same, except we end on EbMajor, which is made up of Eb-G-Bb. It shares a note with the G the melody ends up on, so it still feels stable, like it’s settling there. But it’s a completely different color than the Cmajor chord in the original statement of the melody. It’s a classic false resolution, but it’s really effective here.

There’s stuff like this all over my contributions to the score. They’re the same melodies we know and love, with some different and unexpected flavors.

Thank you – to the Halo community, to everyone at 343 Industries and especially to Joel Yarger for having me on this incredible journey. I can’t wait for you to hear what we’ve created. Also, proud to be composing my part of the score from Chicago, Halo’s birthplace!

Thank you Joel for sharing "Through the Trees" and giving us some insight into your creative process and approach. We're eager to hear and experience more of the fantastic work you, Gareth, and Curtis are bringing to Halo Infinite!

You can keep up with Joel by giving him a follow on Twitter and if you missed it, be sure to check out our prior interviews with Gareth Coker and Curtis Schweitzer. We hope you enjoy these three sample tracks from the Halo Infinite soundtrack and we look forward to sharing more on the road to launch. 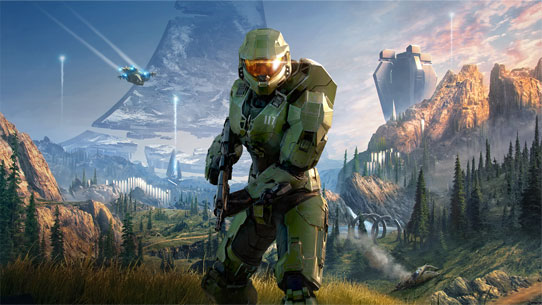 We have made the difficult decision to shift our release to 2021 to ensure the team has adequate time to deliver a Halo game experience that meets our vision. 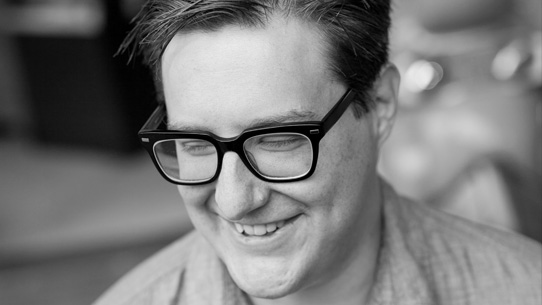 Meet Curtis Schweitzer, one of the new composers working on Halo Infinite, and read about his history with Halo and approach to making music for the latest installment. And, as a special bonus, listen to Curtis' track "Reverie" from the recent Campaign demo! 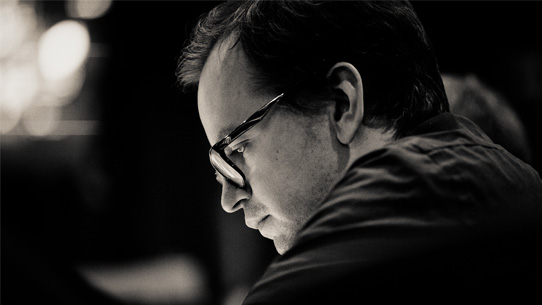 Gareth Coker Sets A Fire In Your Heart

Meet the latest composer helping bring the world of Halo Infinite to life – Gareth Coker! Join us as Gareth shares insights into his process, working on Halo, creating Escharum's theme, and more! Plus, you don't want to miss this exclusive music track, "Set a Fire in Your Heart."