To start, we’d like to thank those of you who have provided feedback in region-specific matchmaking threads on Waypoint as well as r/Halo. Earlier this morning, the team made a series of adjustments that should improve the experience and matchmaking speed for players who have been impacted. Hop on and let us know how it goes. Next, let’s talk about this weekend’s featured playlist: Warzone Turbo.

Warzone Turbo is available this weekend for the first time, and it’s also the first featured Warzone playlist. If you didn’t catch it this morning, we grabbed MP Designer Lawrence Metten to give us the scoop on the new hotness:

Warzone Turbo is fiesta-esque mayhem on a gigantic scale, where you are instantly placed at Level 9 as soon as your Home Base is secure, and are imbued with near-instantaneous energy regeneration. Everything is fair game as players have access to their entire REQ inventory for the full duration of the match.

Funny enough, originally we had no plans to ever release Warzone Turbo. We created the game type at the request of our test team so that they could more efficiently test Warzone features and functionality without having to wait to level up or refill energy. Then one day we made the “mistake” of giving the mode a whirl during our afternoon studio playtest. It was incredibly chaotic and surprisingly a ton of fun to play, which inevitably led to a long and drawn out internal discussion that went something like this:

“Should we ship this?”

After a bit of extra polish, a couple tuning tweaks, and a handful of scattered adjustments later and Warzone Turbo is ready for your enjoyment. I look forward to jumping into the playlist and joining the pandemonium with you all this weekend!

Warzone Turbo is available now, and will be available until Monday morning, April 4th. After you’ve played, be sure to pop into the dedicated feedback thread and let us know what you think.

Ghosts of Meridian is scheduled to drop next week, and today we’re showing off more of what’s inside.

In addition to the below maps, vehicles, weapons, skins, armors, emblems, and more, Ghosts of Meridian will include a variety of game improvements based on your feedback, including multiplayer updates and fixes, sandbox, weapon, and vehicle adjustments, improvements to REQ Station UI performance, a lengthy list of Forge additions, fixes, and improvements, SWAT DMRs as well as a rebalance of SWAT game types within the playlist, and more. As always, we’ll be detailing the full patch notes as Ghosts of Meridian arrives.

Let’s start by taking a look at Tyrant, the new Arena map, which was just announced this morning over at Gamespot. To read about the map’s fiction as well as some tips from designers, head over to their article. Here’s some extra concept art and exclusive screenshots from the Forerunner-themed, exterior, symmetrical Arena map: 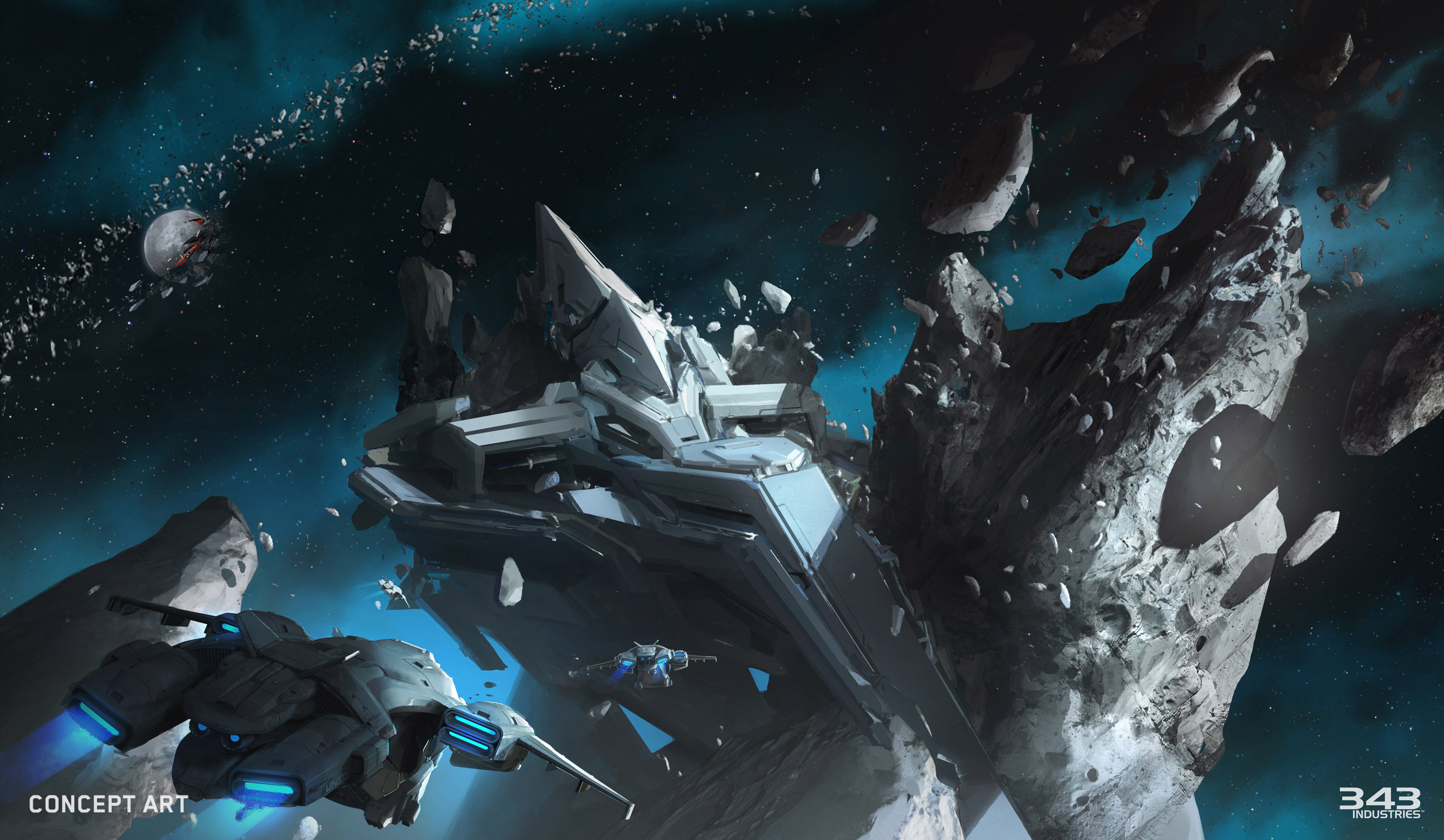 Here’s a bit about the above concept image from artist Sam Brown:

The idea is a forerunner structure has been struck by an asteroid and caught in an astroid belt. This is an establishing shot to show the exterior and establish mood and lighting. There was back and forth on the structure itself so I believe the final design is different from the concept.

Here are a few brand-new Tyrant screenshots, hot off the presses: 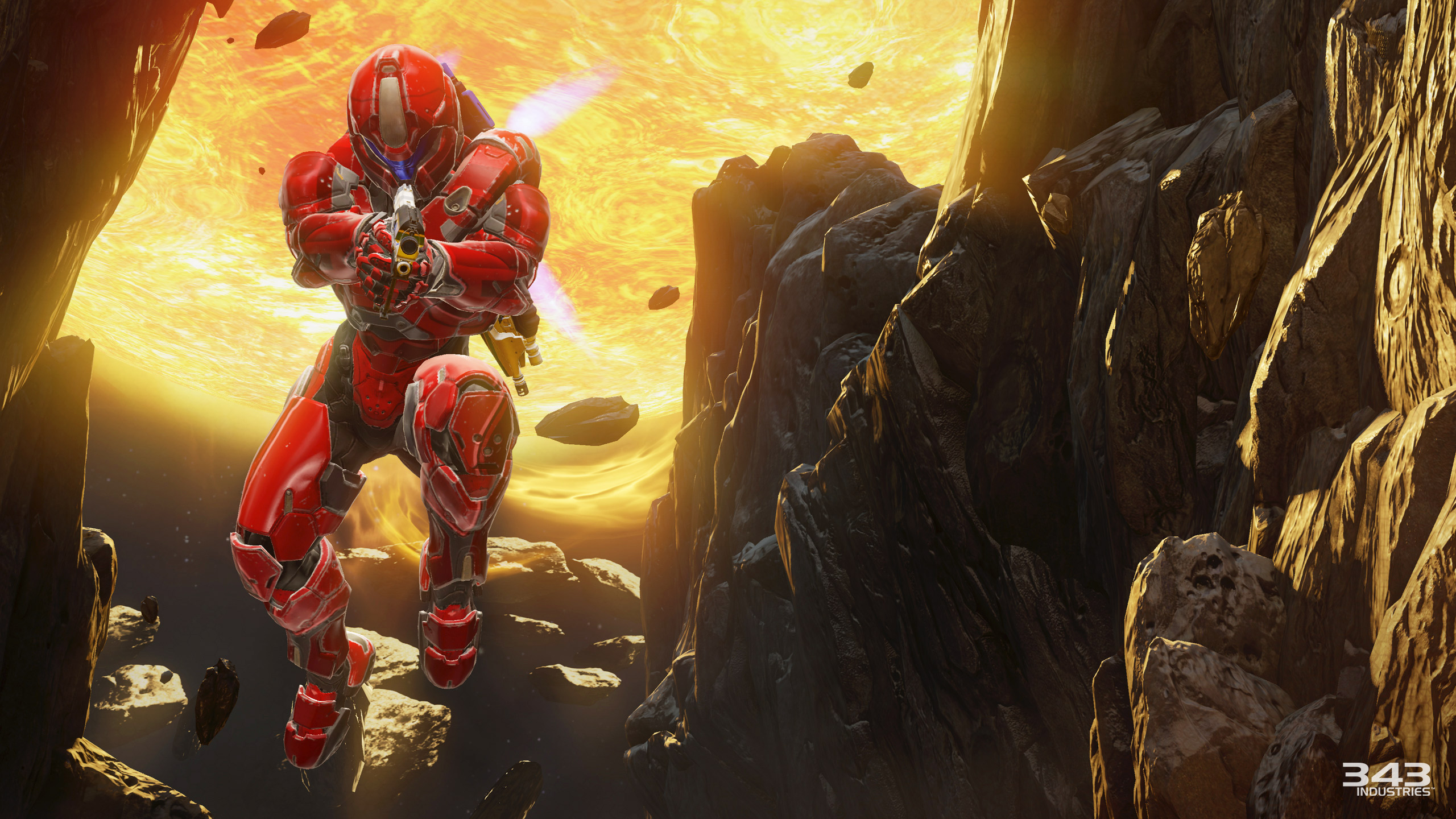 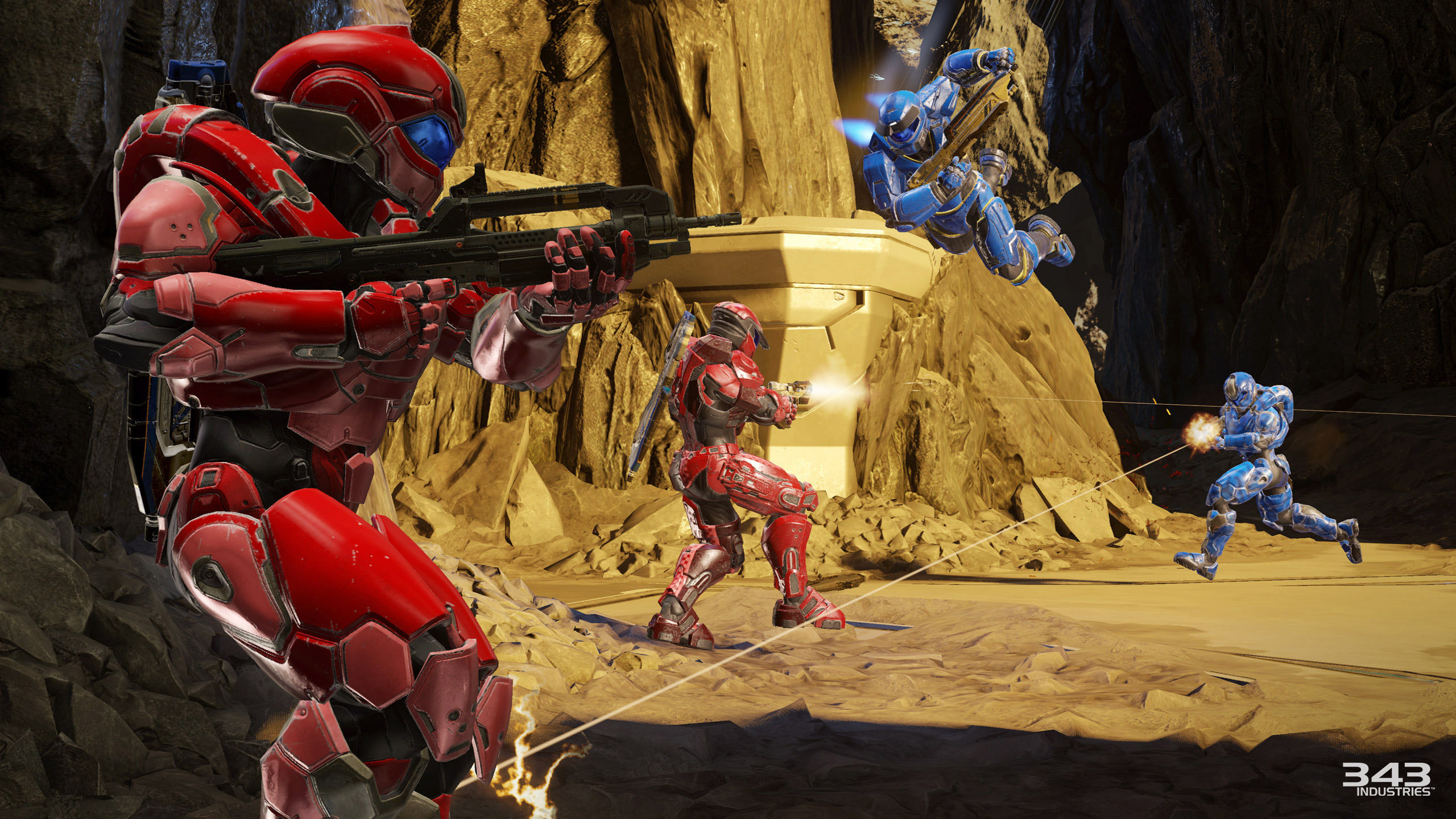 For some new looks at the new Warzone map, be sure to check out today's Gamespot article. To hold you over until next week’s live stream, here are a few more details from the multiplayer team, as well as some new screenshots.

The most condensed Warzone map yet

Here a few new screenshots for this battleground as well: 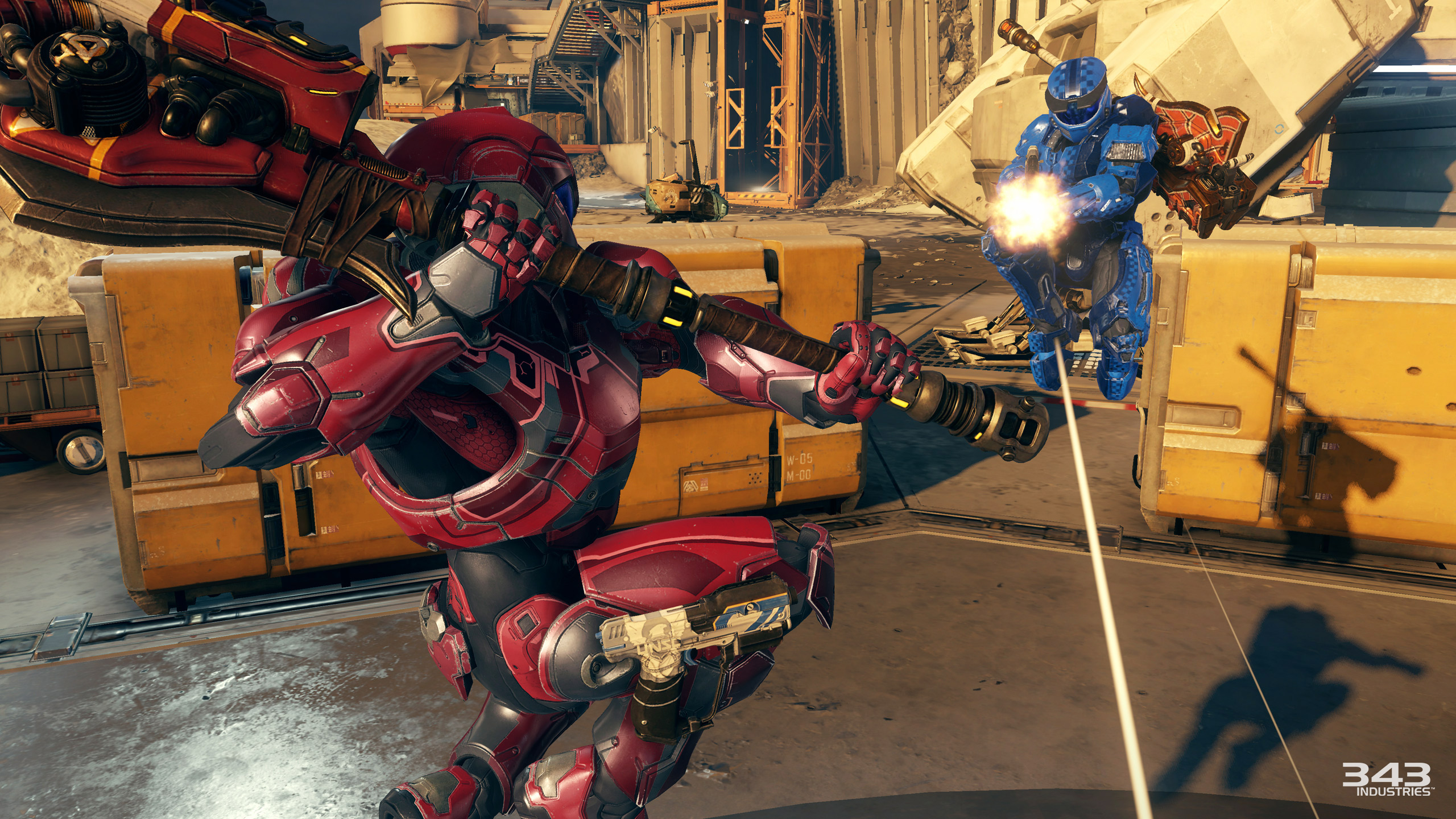 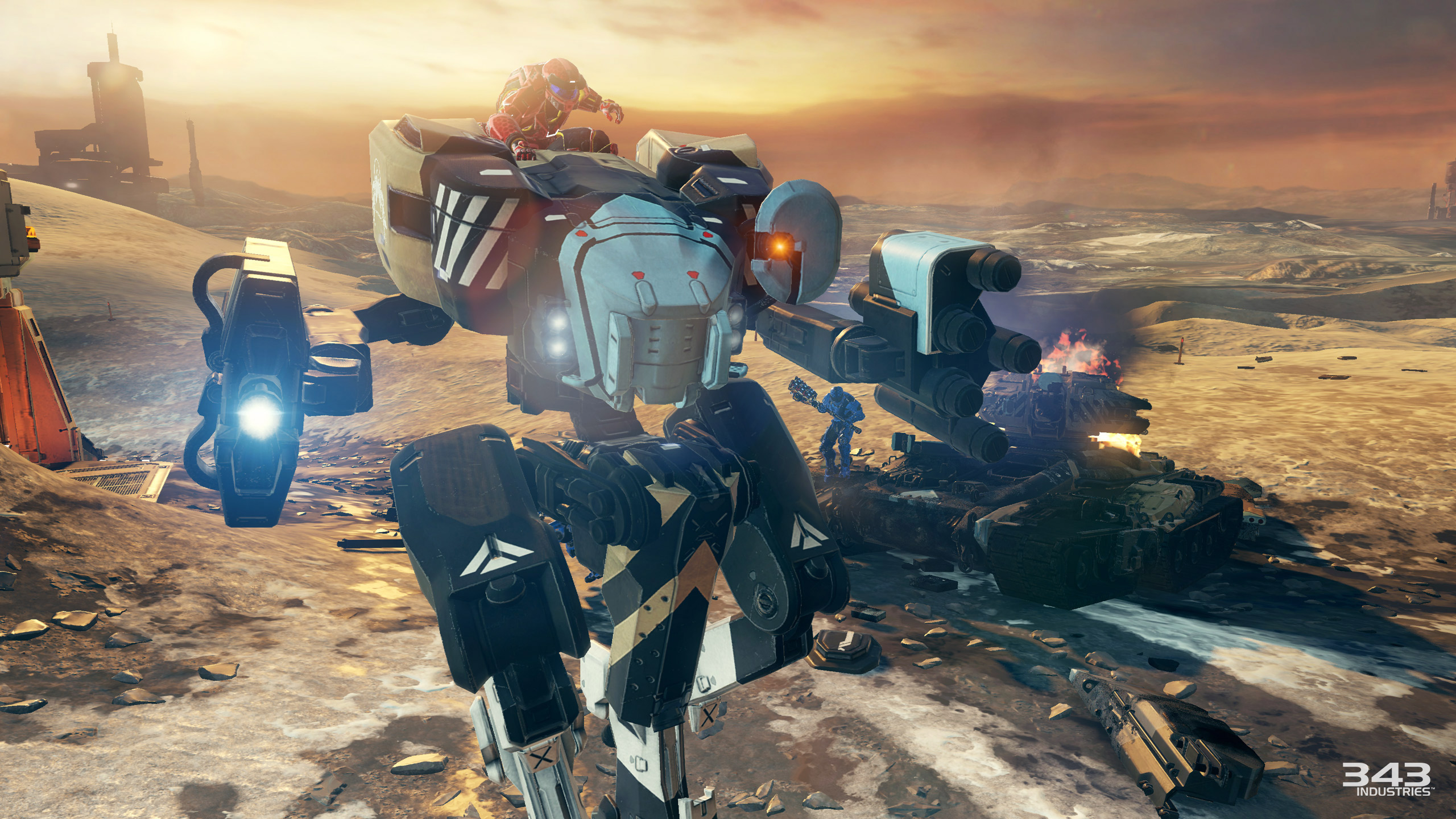 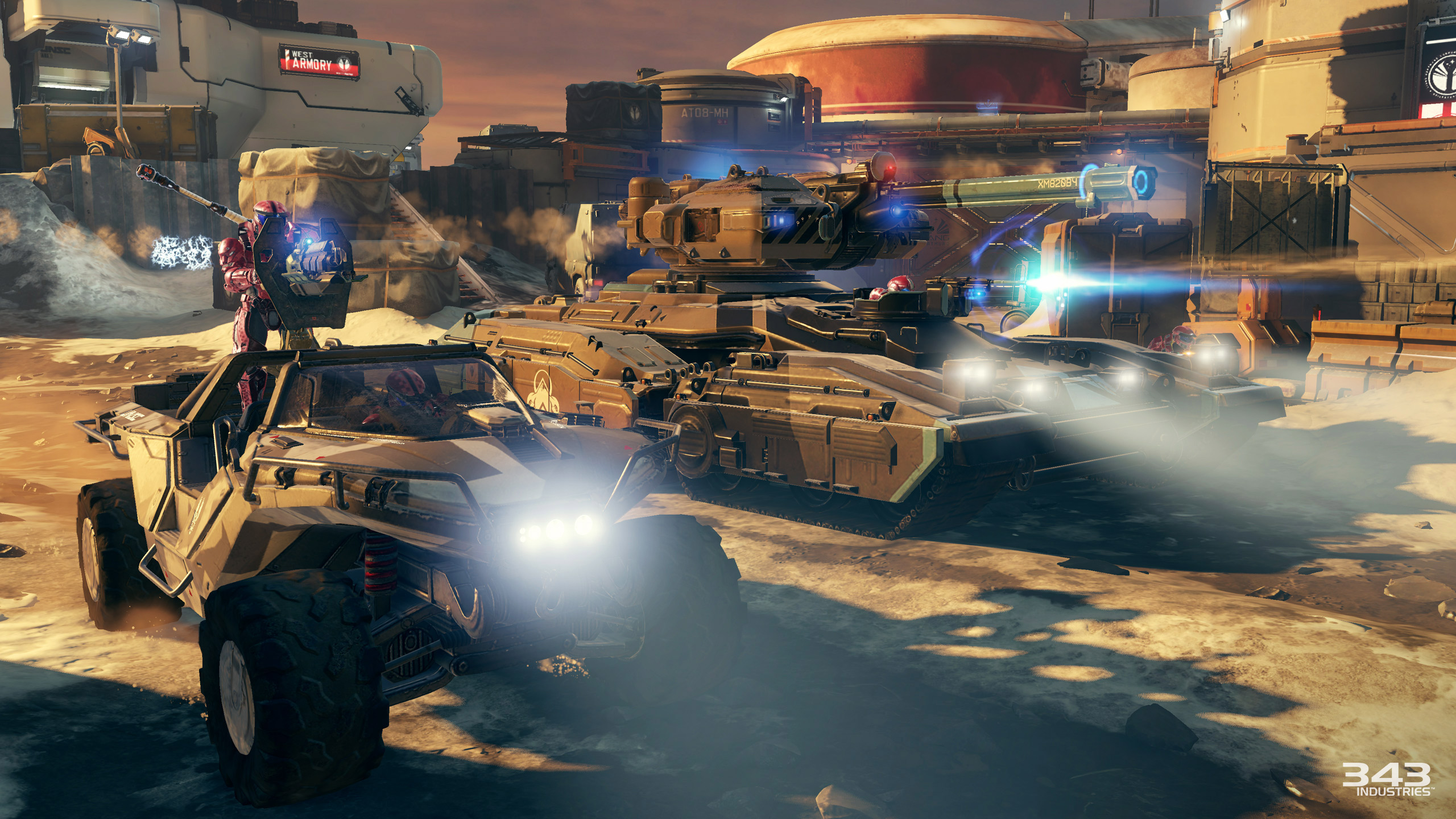 The time has come to reveal all of the REQs that will arrive with Ghosts of Meridian. You’ve seen a few over the past few weeks, but here’s the full list: 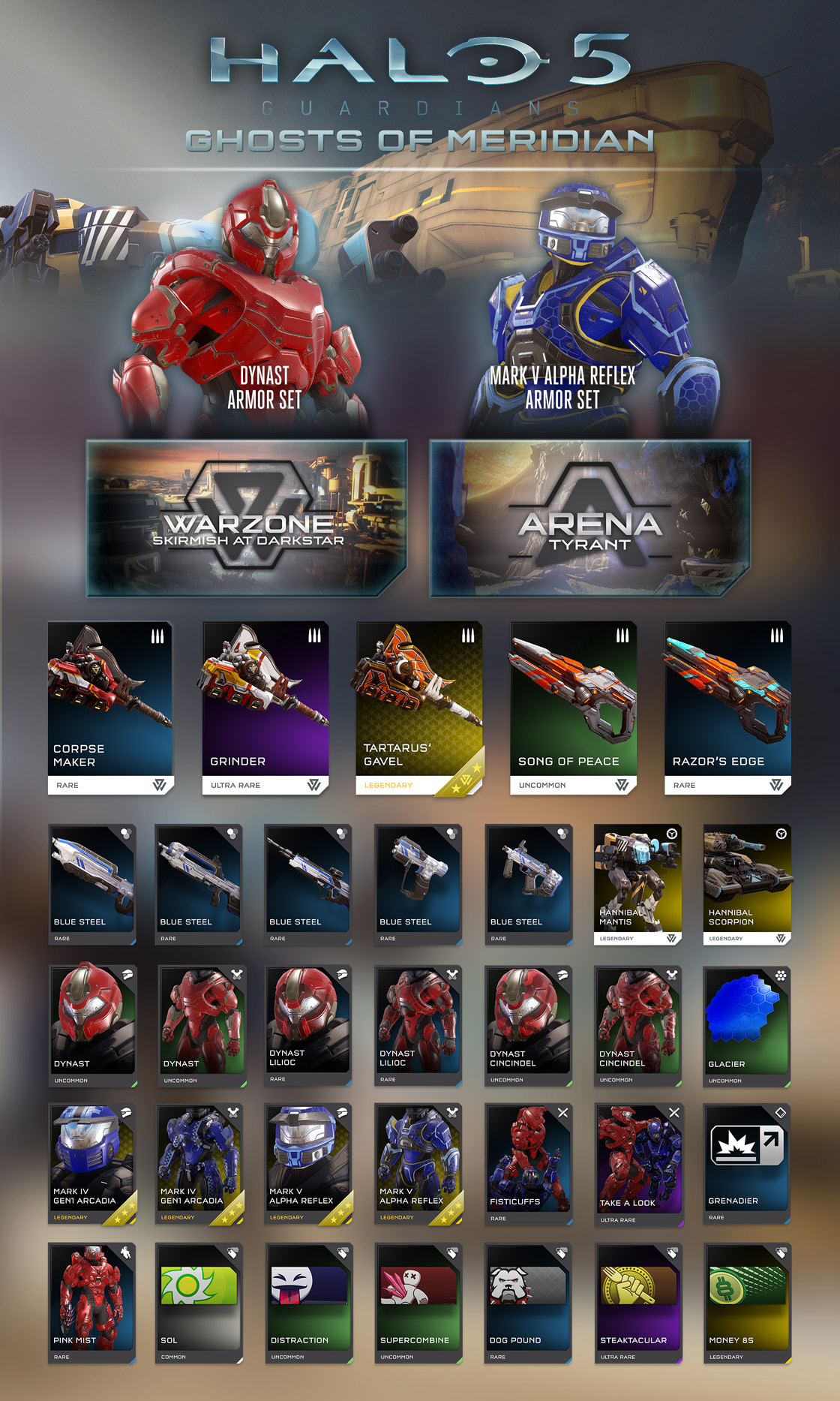 Here’s a closer look at some of the newly revealed REQs:

Put your money where your mouth is. 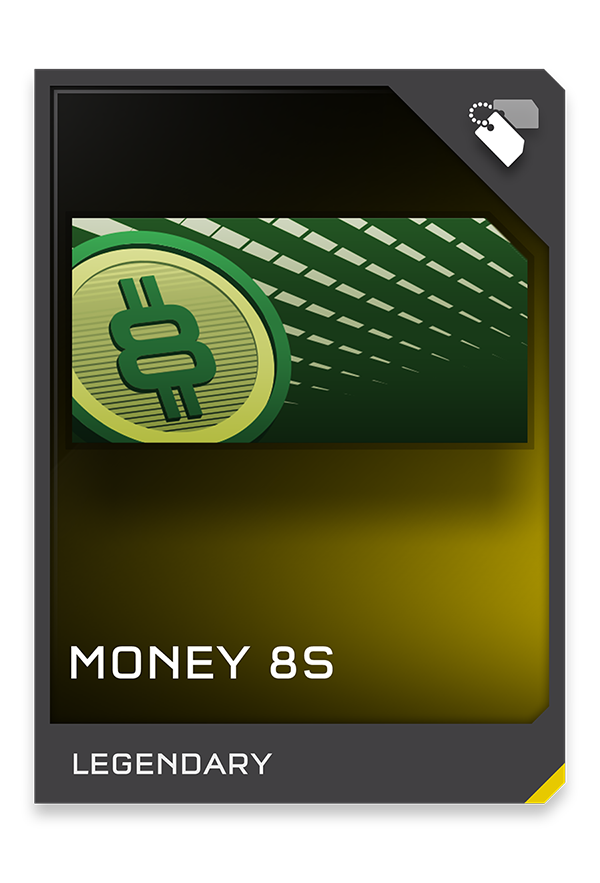 To catch a preview of everything above and more, be sure to tune into next week’s live stream – Tuesday, April 5 at 3PM PDT on Twitch.tv/Halo and the Halo Channel. We’ll see you then! 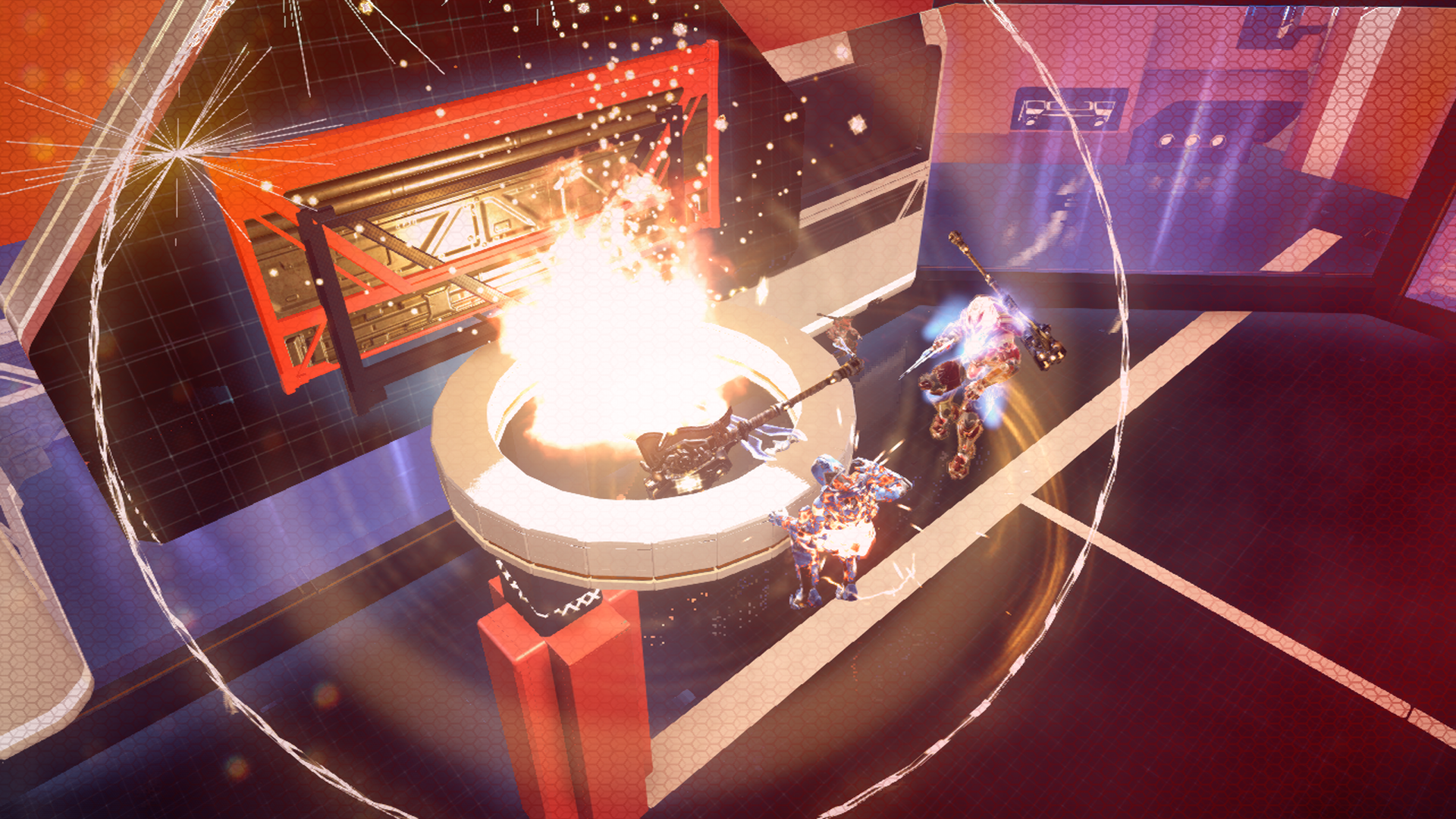 Grifsketball is a spin-off of Grifball, where players attempt to score points by throwing or dunking the ball. Similar to Grifball, Grifsketball spawns players with the Gravity Hammer and an Energy Sword. Unlike Grifball, the players jump much higher and the knockback is much stronger, while Friendly Fire is weaker. Players clashing swords and hammers will launch away from each other, allowing the ball carrier to make a break for the hoop. The ball carrier has faster movement speed and can jump higher, but anyone with a sword will be able to use their lunge to knock them out of the air. When scoring the ball, throwing it in will net the team 3 points. When dunking, you'll gain 4 points, but have a high chance of dying in the process. You'll see that dunking a ball into a pit of fire may be a bit dangerous. Players are able to use their Ground Pounds as an area of effect knockback tool. It allows players to clear areas of space so they can let the ball carrier through. The trade-off of this is that the Ground Pound does very little damage. You're also able to throw your allies around with this, so be careful. It can be useful to launch your ball carrier quicker across the map, but at the cost of damaging them.

I hope you and your friends will have fun on the Grifsketball map variants, which you can find on my Bookmarks (GT: Vorked Manback) alongside the game mode. Look out for HangarBall, AbyssalBall, HoopsBall, and SpaceBall (Curtousy of DrumStepped). Remember, HangarBall and AbyssalBall can support as many players as you can throw at them!

To see the game type in action, head here.

Next up is the Mitake Machine, and all of the videos found on the GeSAU YouTube channel, originally spotted by r/Halo’s u/UnsortedGaming this morning. This Forge masterpiece is awesome, and the videos only get better. You can find this amazing creation under the gamertag toketake.

This week’s clip goes to SpiTshoT one, who pulls off some nice defensive work with the Sniper Rifle on Plaza. In German.

That’ll do for this week, friends. We’ll see you next week for the Ghosts of Meridian live stream – Tuesday at 3PM PT on Twitch.tv/Halo. 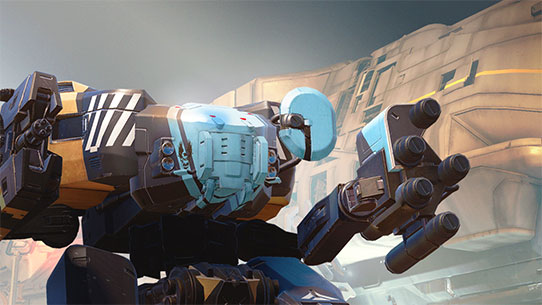 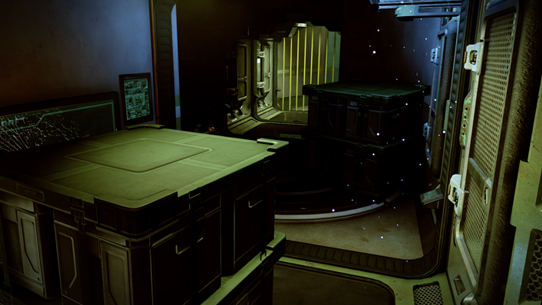 Greetings! Since the last community update, we’ve released the Ghosts of Meridian, had two livestreams, released the Warzone Firefight Beta, and kept a very close eye on feedback, including the many fantastic threads on Warzone Firefight rounds, objectives, and difficulty, your thoughts on Tyrant and Skirmish at Darkstar, recent sandbox updates, and more. We’re tracking down issues with custom games traits, Grifball betrayal thresholds, CSR only moving one point at a time (we pushed out an... 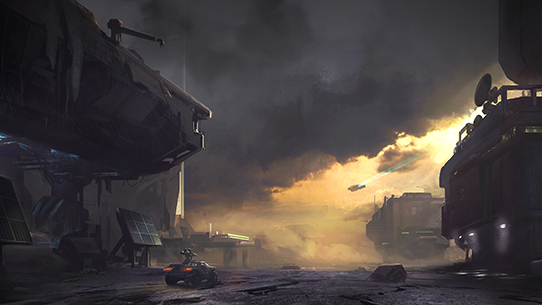 The Calm Before The Storm

Over the past few months, teams from around the globe have been duking it out for the chance to represent their region in the Halo World Championship, as well as a piece of the $2.5 million prize pool. I, too, have been trying to figure out how I can get my hands on this prize pool, and so far have met a large deal of resistance from the Microsoft legal team. The 16 teams in the above graphic have been slotted into their respective groups (see them and more at Halo.gg), and at the end of the...