3. <{{{🎖) GOLDPACK COMMODORE (🎖}}}>
GoldPack Commodore (GPCD) has authority to grant "requests" for lower ranked leaders, they can banish members & strip big leader titles, (GPCD) is officially 3rd in command of GoldPack & only has 2 officials that he or she takes orders from & that's the (GPSL) & (GPGL) other from that the rest of the chain of command must always follow a (GPCD) even if they don't wish to.

4. <{{🏅) GOLDPACK IMPERIAL (🏅}}>
GoldPack Imperials (GPI)s are truly the elite when it comes to being a GP LEADER, their normally highly trained & trusted leaders who have been within the clan for quiet some time before reaching this position, all (GPI)s use to be a (GPOC) & have survived it's very hard responsibility level & passed through rising as leaders above (GPOC), they're power is much like a (GPOC) but they're responsibility changes from being the commander of commanders to becoming the trusted leaders of the inner cycle or in this case the inner Octagon/Pack.

5. {{{{🏴] OVERLORD COMMANDER [🏴}}}}
The GoldPack Overlord Commander (GPOC) has more on their plate then most, more then a (GPI) as the role of a (GPOC) is to monitor & command all the commanders which is why the title is; "GOLDPACK OVERLORD COMMANDER" he or she is the commander of commanders & they must be able to deal with stress & responsibility at a level higher then most, when things look a bit messy with the lower commanders the higher ups first turn to the (GPOC) to investigate what ever it may be & to see if the (GPOC) could of done anything about it or at least fully know & understand what is going on with the lower commanders, knowing that they are all people with their different styles & sometimes people will try to do take overs & other dumb things like that, it will often come from a low ranked commander making the role for a (GPOC) sometimes rather hard & complex.

6. {{🎗] LORD COMMANDER [🎗}}
GoldPack Lord Commanders (GPLC)s are the highest ranking commanders within a faction of GP, Any commander should report to a GPLC 1st, Battles against other clans may be controlled by a GPLC and they don't need approval from superiors if their unavailable/gone,
GPLC are field tested.

7. {{{➿] ROYAL COMMANDER [➿}}}
GoldPack Royal Commanders (GPRC)s are Trusted commanders to the clan & anyone with this title is carrying the responsibility it comes with as well as representing their leader who entitled them with such authority, (GPRC)s are permitted to start battles against other clans of all types except for "raids", (GPRC)s need special approval from the higher ups for those raids to be legitimate & who ever gave the approval then takes the responsibility of the raid.

8. {{➰] COMMANDER [➰}}
GoldPack Commanders (GPC)s have been looked at as a stable Commander that can handle a position of leadership so they lose there Deputy title & are no longer looked at as a leader in training, their roles are the same as before but with more authority & power.

9. ((🔘] DEPUTY COMMANDER [🔘))
GoldPack Deputy Commanders (GPDC)s are the leaders in training, If you are commander martial & think you can handle responsibility then it starts here! As a (GPDC) your role is to Listen, Study, Recruit & always do as your told by the higher up commanders as they'll request help or support from the deputies when needed, take note of how the higher up Commanders get things done when it's needed & recruit people regularly when you can, being able to recruit people & put them through boot-camp requires a small level of leadership & responsibility & doing this often will show your capabilities. 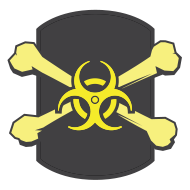 GoldPack is the Gold standard