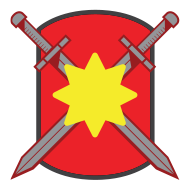 Through Chaos we find Serenity

The Legion of Chaos is a competitive clan that was formed during halo 3s life spam. We have been on ever halo ever since.
We are a militarised clan structured around a roman legion, ie. Latin ranks, hierarchy and names.
We play various game types on halo 5 but have grown accustom to Warzone and Team Arena. We try to maintain a high level of communication and strategy when playing these game types. We will also be reaching out to other clans and try to set up meetings and clan battles.

The clan leader is called a legate and they oversees all matters regarding the clan.

The second in command is called the Tribunii laticlavius and trains the recruits and brings them up to speed on how the clan fights, the call out, any armour requirements that may be currently in place.

The third in command is called the Praefectus Castrorum, they oversee the defensive aspects of the clan, such as as the clan forge maps and deal with any events that take place on said maps.
The clan has three groups, they are-
The Legionaries - heavy infantry
The Velites - Light infantry
The Praetorians - clan guards
REQUIREMENTS-
Must be able to follow orders and communicate in matches.
Have respect for each and every member and respect for any adversaries we may face.
Must adhere to any dress code in affect. (we currently don't have any armour sets but we do have a colour system that needs to be worn in clan games.)
Maintain a certain level of seriousness when in clan events.
If your interested in joining or have any questions, message me on xbox live. My gt is crimson flyboy

It gets stuck around 22% and won't continue. Have tried 're installing but nothing seems to work.

Really just want to play the game but it won't let me. Any ideas ?