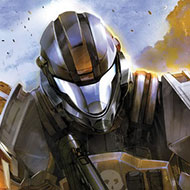 Halo 3 was the first FPS that I ever played, so Halo will always be in my heart.

Spartan Fireteam Phi-Nine is a single squad of spartans who used to be ODSTs. Our members joined the UNSC Marine Corps at different times and for different reasons, and eventually met when they enlisted in the ODST program and were assigned to the newly formed ODST Squadron Phi-Nine of the 3rd ODST Battalion. At the start of the Human-Covenant War, as word started to spread about the mysterious Spartan-II program, the entirety of Squadron Phi-Nine enlisted in the Spartan-III program, becoming “Fireteam” Phi-Nine, and received their semi-powered assault armor.
When all Spartan-IIs were recalled to Reach to discuss the growing Covenant threat, Fireteam Phi-Nine was recalled to Reach as well, and was one of the the very few Spartan-III teams to ever receive suits of fully powered MJOLNIR assault armor, as did Spartan-III Fireteam Noble. Phi-Nine would choose to be outfitted with MJOLNIR armor that was of the ODST variant; the armor that was adopted and modified by the ODSTs in the rest of the UNSC.
During the Fall of Reach, Phi-Nine was stationed on the UNSC Strident Class Heavy Frigate: Swift Retribution, named in honor of the worlds lost to the Covenant invasions. The Swift Retribution pursued a Covenant vessel that fled from Reach carrying high tier ONI assets from Sword Base, and was declared MIA three weeks later.
After the end of the Human-Covenant War, the Swift Retribution was found by the exploration vessel, UNSC Infinity, where it was discovered that the Swift Retribution had successfully recovered the ONI assets, and destroyed the Covenant vessel, yet not without sustaining critical damage to the ship’s engines and slipspace drive, leaving them adrift deep in uncharted space.
Upon their recovery, Phi-Nine chose to enlist in the Spartan-IV program, where they received their new Gen2 MJOLNIR Armor, and are now working to earn the newly released Gen2 ODST varient. Phi-Nine is currently stationed upon the Swift Retribution, having finished full repairs, as a support frigate to the UNSC Infinity.

I think that they need to make it one hit. With the remove of the flagnum (yay!) the holder needs some defense