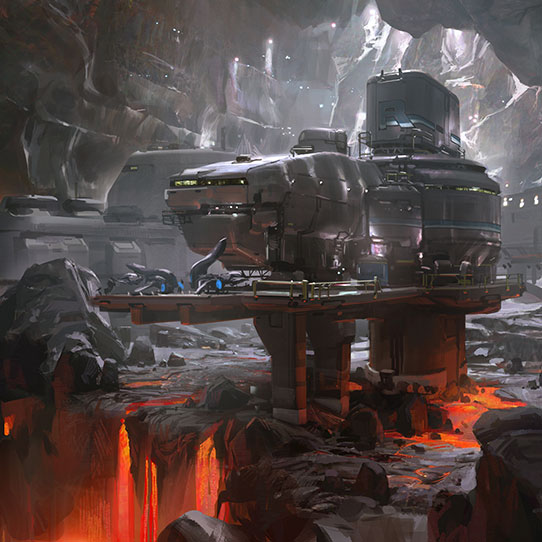 Meridian is the natural satellite of the gas giant Hestia V. Its impressive, Earth-like features, earmarked it early for human colonization. Although an Outer Colony, Meridian’s natural makeup and rich culture, attracted many outsiders, eventually fueling a robust economy and cultural diversity. Before the war, Meridian was easily one of the most vibrant and quickly growing colonies in all of human space. Now, however, years after the Covenant’s vicious assault, only a small pocket of Liang-Dortmund contractors can be found on its surface. Huddled around their only remaining space elevator, these excavators have constructed makeshift town referred to as Meridian Station.

Founded in 2431, Meridian’s colonists initially took residence along the verdant equatorial coastlands, later migrating to the vast supercontinent, which would be the center of Meridian civilization for decades. Despite a number of conflicts fueled by antagonistic political ideologies, including the Free Patriot Movement of 2457 and the Sundered Legion of 2495, intervening decades ultimately led to the colony’s stabilization. Military contractors such as the Chalybs Defense Solutions took residence there in 2479, and the even though the Insurrection had some level of prominence on Meridian, prior to the Covenant War there was a strong UNSC presence across the moon.

When humanity was already decades into the Covenant War, most of those on Meridian thought they had somehow evaded the alien alliance. Such was not the case. In 2548, the Covenant found Meridian and began their attack, attempting to cut off supply lines from the colony to other fronts in the war. Meridian’s impressive Air Force and their extensive orbital defensive grid allowed them to fight for three full years, before the Covenant’s sheer power swept away the colony’s resistance. By 2551, the world had been reduced to molten slag and vitrified soil.

Still clinging to the ghosts of commerce, mining platforms like this one scour what remains of the world’s surface—a tragically hollow attempt to resurrect Meridian’s past opulence and splendor.

While the loss of Pinnacle Station dealt a massive blow to Liang-Dortmund’s operations on Meridian, demand for the planet’s vitrified resources has neither slaked nor slowed. Working quickly and quietly to avoid the notice of the Created, regional directors at Liang-Dortmund quickly implemented contingency plans to mitigate the economic impact and reconstitute operations on the frontier planet-moon. Though the company’s local headquarters at Meridian Station was devastated, the remote polar outpost of Darkstar Station survived, its workers and engineers largely unaware of the disaster that unfolded on the other side of the planet and the uncertain future that awaits them under Cortana’s rule. Despite the uncertain astro-political climate, Liang-Dortmund continues an accelerated resource gathering operation while tacit permission exists, transferring one of its largest resource processor ships, additional workers, and human resource specialists to Meridian’s orbit in order to continue work and assess the company’s remaining investments. But anomalies abound beneath the battered surface as ancient machinery buried deep in the planet’s mantle stir to life, and the UNSC makes plans to once again revisit the surface in search of answers, regardless of what forces that intervention may unleash.

Jorta Station was an important cog in Liang-Dortmund's operations on Meridian, as the site was a central hub for the megacorporation's seismographic network and labs devoted to solving the hard problems of "deglassing" the planet. Due to the sensitive nature of the task at hand, Jorta Station also served as the command center for Liang-Dortmund’s private security forces, housing a fleet of Warthog utility vehicles, Pelican dropships, Scorpion tanks, and Mantis walkers in case of intrusion by Kig-Yar raiders or rival corporations seeking to conduct kinetic espionage.