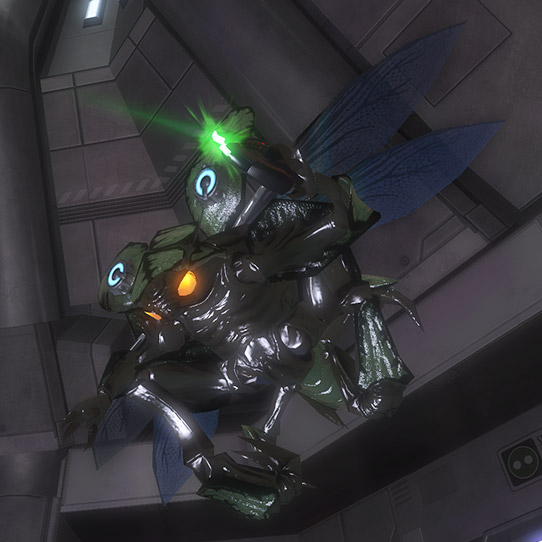 The Yanme’e are sentient carnivorous arthropods with chitinous bioluminescent exoskeletons and two pairs of wings. They are polydextrous--capable of using both their hands and prehensile feet to grasp tools, weapons, and even enemies while in combat. Despite their large size and high-gravity homeworld, Yanme’e are capable of limited flight. These bipedal insectoids evolved from winged tree-dwelling arthropods which had developed complex motor skills through a chitinous, flexible appendage that behaved like an opposable thumb. This advancement led to higher levels of technology, evolved societal coordination and cooperation, and ultimately to contemporary Yanme’e society. Communication between individual Yanme’e occurs both sonically and by way of pheromones, making conversation with other species rare and challenging.

Most Yanme'e fall into one of three distinct castes: domestic, worker, or protector, although the Covenant artificially merged the latter two. To outsiders, males and females look extremely similar, though small changes in coloration or silhouette can indicate class and function. Yanme'e queens are substantially larger than the rest of their species with distended abdomens and thick legs. Yanme'e society is driven by an aggressively matriarchal focus, with their various castes supporting each hive's preservation through the orders of their queen. The queen's well-being is paramount to the propagation of the species and their way of life. She is the focal point of all progress, including most major advances in science and technology--most of which have emphasized protection and augmentation of the hives.

On occasion, some aberrant males (also called “unmutuals”) are born with destructive, social abnormalities that can be incredibly difficult for the hive to manage or maintain. Relatively small in number, these are usually marked and banished, living in small cavernous spaces in between hive territories. With the arrival and species integration into the Covenant body, a notable rise in unmutuals has occurred. This increase was significant enough for the Covenant to set up Kig-Yar-managed penal colonies, forcing unmutuals to benefit the Covenant’s war efforts with hard labor.

Yanme’e are naturally capable of short bursts of flight on their 2G world of Palamok. When the Covenant discovered them, efforts were made to extend this ability by fixing gravity-dampening modules to their bodies. This adjustment has made Yanme’e impressive fliers, particularly on worlds with less gravity than Palamok. Although Yanme’e were initially leveraged for custodial and maintenance purposes only, their ability to fly became a critical part of their ascent to a combat-functioning role.

Hives are composed primarily of mud, wood, and cellulose materials mixed with Yanme’e saliva and feces. While hives can form in any location where sufficient raw material and Yanme’e exist, they are usually found underground or in the vast jungle canopies that cover most of Palamok. Additionally, both Oquiu and Ka’amoti, two of Palamok’s more significant territories, have massive geological structures, which the local Yanme’e have densely packed with hives. Possibly the most intriguing facet of this architecture is that hives can be created at an unbelievably fast rate--with impressively vast structures generated over a matter of hours. Combat-deployed Yanme’e are often ordered to create temporary, makeshift hives as the Covenant military forces their way into enemy territory. This act allows the occupying armies to establish a physical foothold deep within enemy territory, (often hidden on cavernous ceilings or deep underground).

Upon the arrival of the Covenant in 1112 CE, the Yanme’e violently resisted the foreign invaders. The Covenant, however, were reticent to destroy Palamok for fear that the hives might guard Forerunner treasures below. Although no evidence of Forerunner residence was found upon later exploration, at the time the San’Shyuum were forced to learn the Yanme’e language and barter deals with their kind. This effort staved off a likely long war due to the Yanme’e’s extraordinary numbers. Yanme’e were integrated into the Covenant en masse, and for years they served in a strictly custodial capacity, although the Covenant eventually developed a variety of combat roles for the species. After the Human-Covenant War subsided, and the Covenant splintered apart, most Yanme’e gladly returned to their native system of Napret. 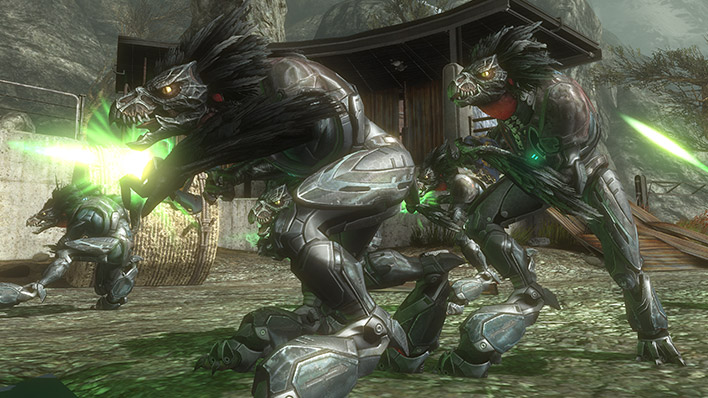 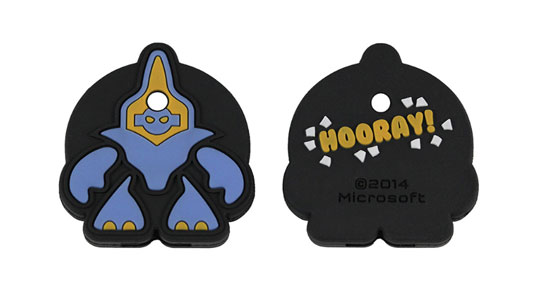 Enemies are definitely more fun when they cheer for their own demise. Remember to shoot for the head to hear that “hooray”.