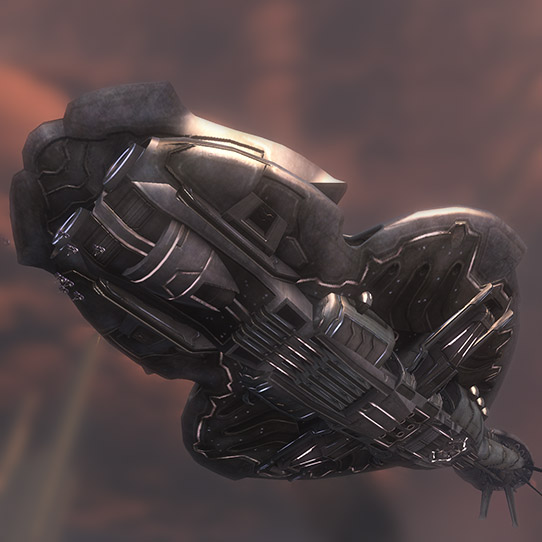 Since the very beginning, the Covenant's primary mode of intergalactic transportation and means of enforcing the Prophet’s dictates has consistently been the cruiser. They were manufactured in vast quantities, easily surpassing the numbers of any other known Covenant vessel.

Covenant cruisers follows the typical structure of all Covenant ships - a sleek hull with sweeping contours and nearly perfect symmetry, reminiscent of large marine animals found on Sangheili colony worlds. Along its undercarriage are two to four hangar bays aft of a large gravity lift platform which can be detached and lowered onto a planet's surface. The vessel then generates a vertical gravity beam for conveyance of infantry, supplies, and assets. Modular bays within the ship can be configured as engineering, medical, armory, barracks, and religious facilities, interconnected by a network of narrow corridors and lifts. Buried deep within the vessel's heart is the command deck, a large room with a centralized bridge platform typically occupied by only the highest-ranking officers.

The Covenant fielded at least four distinct classes of cruiser during the war with humanity, and while each looks strikingly similar, their size and firepower can vary wildly.

The Covenant’s most prominent cruiser design. They are ideal for troop and vehicle deployment during ground engagements, as well as participating in ship-to-ship naval combat. In the tumultuous years after the war, many battlecruisers fell under the control of Kig-Yar scavengers and Sangheili warlords.
ROLE: Attack, occupation LENGTH: 5,847ft (1,782m)

While the CRS-class light cruiser may appear to be a smaller, weaker version of the battlecruiser, it is still more than a match for most UNSC vessels. Rarely seen, light cruisers have been described by UNSC forces as looking like “luminous manta rays.”
ROLE: Support, interdiction LENGTH: 984ft (300m)

Developed when shielding technology was far more limited, the RCS-class ships lacked the firepower or robustness of the later CCS-class. However, they took on an important role in the various Covenant splinter fleets that formed after the Great Schism.
ROLE: Patrol, occupation LENGTH: 6,562ft (2,000m)

Heavy cruisers pack plenty of offensive punch by way of their impressive plasma torpedo array and heavy plasma lance emitters. After the Great Schism, these ships proved invaluable to warlords who could acquire and crew them.
ROLE: Survey, command LENGTH: 9,843ft (3,000m)