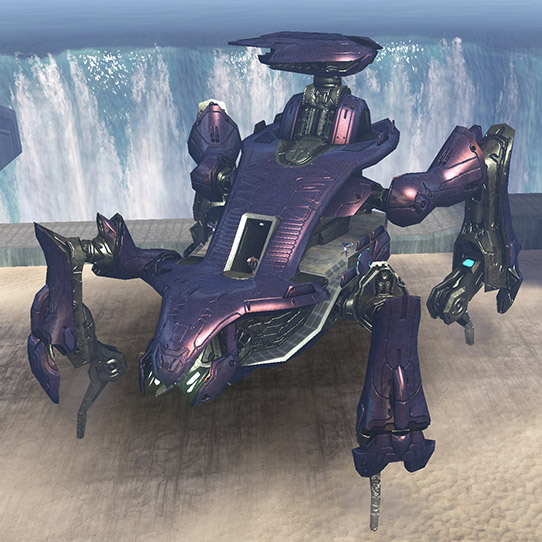 Scarabs are large, heavily armored all-terrain walkers employed by the Covenant and its successors as mobile bases, combat engineering vehicles, and heavy weapon platforms. All Scarabs make extensive use of Lekgolo worm colonies bound together with the platform’s control systems, though the gestalt is often barred from having complete control of their housing; Scarab meta-colonies were often populated by particularly unruly strains of Lekgolo that could not be left to their own devices without inviting ruin.

While confusing to humans, the Scarab was never considered a “vehicle” as such in Covenant service. The reliance on Lekgolo and their ability to operate independently led to Covenant categorization as ultra-heavy infantry when used in combat. Nevertheless, Scarabs were too valuable to operate without support, and most were accompanied by infantry and supervisory personnel when deployed in the field.

The defining system of all Scarabs is their focus cannon—a nearly capital-scale energy projector capable of either mass destruction or delicate stratigraphic excavation depending on tuning and the operator’s expertise (the Lekgolo alone have no fine control over the beam).

Most (but not all) Scarabs feature turret-mounted heavy plasma cannons and emplacement points for crew-served weapons for embarked defenders. Scarabs that lacked secondary heavy plasma cannons were often fitted communication and proselytization arrays in their stead, though the significance of this is unknown, and their role (if any) in Covenant military operations remains a subject of research within ONI.

Scarabs are a family of related walkers within a larger class of constructs known as Excavators, which are organized by the Covenant into “tiers” denoting their size, digging efficacy, and delicacy. Nine Excavator tiers are noted in surviving records, though humans have only encountered three; all Scarabs are tier-four on this scale. Harvesters are tier-five Excavators, while Locusts are tier-one.

Five Scarab variations have been type classified by the UNSC, though only three are known to have been encountered by human forces in any number.

Type-29: Rarely encountered, the Type-29 Ultra-Heavy Site Excavator appears to have been a special-purpose excavation machine in Covenant service, deployed to reveal deeply buried Forerunner facilities, with limited combat utility; it could not self-deploy and had to be assembled on-site due to its delicate components and sheer size. The Type-29’s scarcity and the reverential language used in Covenant records indicate it may have been an ancient design used only to reveal particularly momentous reliquaries. Whatever its antiquity, the Type-29 was fitted with the most powerful focus beam of all known Scarabs.

Type-36: Almost certainly a field modification, Type-36 Ultra-Heavy Siege Platforms are fitted with a massive Class-4 plasma cannon, analogous to those fitted on the Type-27 Mantis platform. These vehicles used a range of different chassis designs, though their performance characteristics were nearly homogenous.

Type-47: Synonymous with “Scarab” to UNSC forces, Type-47 Ultra-Heavy Assault Platforms were type classified in 2547 despite occasional encounters as early as 2527. Rarely employed against the Outer Colonies, the Type-47 began to be fielded in large numbers near the end of the Covenant War to crush UNSC fortifications on Inner Colony worlds. Of special note is that due to a quirk of UNSC administration, two Scarab chassis types were designated the Type-47; unprecedented numbers of both permutations were deployed during the invasions of Reach and Earth.

Type-47B ‘Deutoros’: The most commonly encountered Type-47 Scarabs were autonomously operated by the Lekgolo contained within, effectively functioning as an exoskeleton for the gestalt intelligence of the inhabitants. Fitted with a focus cannon and secondary heavy plasma cannon, heavily armored, and surprisingly agile, the Deutoros rightly struck fear in the hearts of UNSC forces.

Type-47A ‘Protos’: Of unknown origins even to the Covenant forces that were issued them, the Protos towers roughly fifty meters into the air, dwarfing the Deutoros design. Rather than a single large plasma cannon as a secondary armament it used two separate suspensor-mounted heavy plasma repeaters optimized for anti-aerospace use. Covenant forces almost never used the Protos Scarabs for direct combat, and later analysis of Covenant records confirmed it was classed as a specialized artifact-retrieval vehicle, with a fine-tunable focus cannon and specialized sensor arrays that human forces rarely had the opportunity to observe as it burned its way through their defenses. 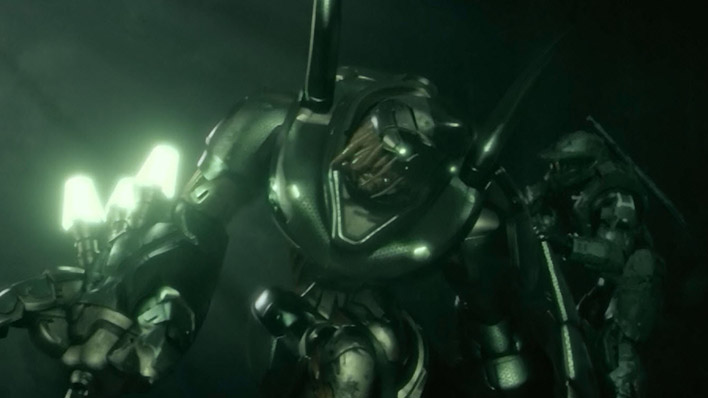 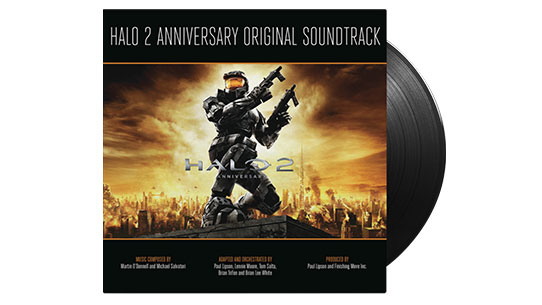 Your record player never sounded so good! Expand your collection with the vinyl edition of the Halo 2 Anniversary soundtrack.