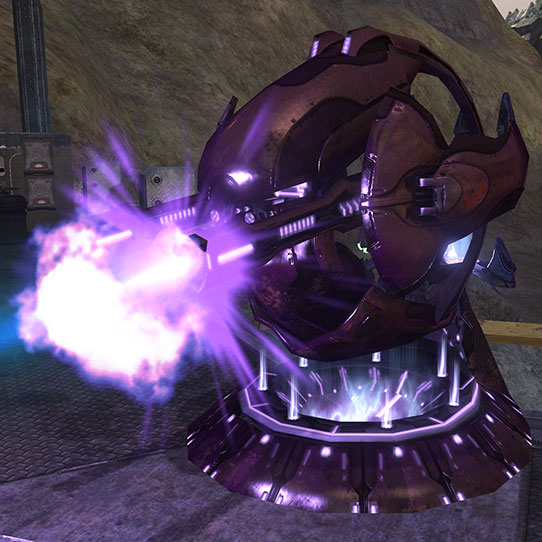 Shade turrets are defensive emplacements that can be quickly deployed to protect outposts and temporary camps, and aid in the development of defensive positions. Although their design and loadout vary based on fleet requirements, all Shade turrets are characterized by a heavy weapon turret sitting aloft a highly versatile anti-gravity platform, and are generally operated by a single crewman. The dull and often menial work of operating Shade turrets is usually relegated to Unggoy, who relish the opportunity to relax in relative comfort with limited requirements for mobility.

Before its destruction, Shade turrets were exclusively designed and manufactured by the Assembly Forges of High Charity. Based out of the Sanghelios continent of Tolvuus, Achoem Weapons now continues the long-standing tradition of manufacturing the Shade weapon emplacement. While the physical shape of the Shade has evolved significantly since its inception at the Assembly Forges, its primary function and purpose remain unchanged.

As with most Shade turrets before it, the Type-55 variant Achoem produces is used to quickly cut down enemy infantry and, secondarily, to provide anti-air and anti-armor support. It expels an unrelenting barrage of superheated plasma bolts at targets, providing both direct and suppressive fire over reasonable engagement distances, though with depreciating accuracy at greater ranges.

The preeminent T-55 Shade is a single rapid-fire medium plasma cannon with a new energy channel design that appears to be a novel miniaturization of plasma compression systems previously seen only on capital ship weapon batteries. Both the cannon and antigravity turret mechanism are powered by a ruggedized fusion coil embedded in the base. Though it cannot power the turret indefinitely, the coil energizes the Shade’s systems far longer than any reasonable combat encounter would span.

Determining the history and design sequence of Shade turrets is challenging for UNSC intelligence analysts, even those with access to Covenant databanks and ability to interview Sangheili artisan-armorers at Achoem Weapons. The primary issue is that the Covenant did not recognize variants of the Shade design the way their human opponents did, and lacked specific nomenclature for the various styles and armament packages seen on the turrets. For thousands of years, fleets were simply provisioned with “Shades,” often of almost unrecognizable chassis shape and armament compared to contemporary patterns. Even during the Covenant War, the type of Shade deployed was driven almost entirely by the aesthetic sensibilities of San’Shyuum ministers responsible for fleet logistics and weapon procurement, with no overriding system or schema behind their deployment.

The term “Shade” refers to a platform of weapon emplacements with diverse configurations and functions, but they’re all similar enough to be grouped together categorically. All are anti-personnel and ad hoc anti-matériel emplacements with heavy weapons installed in 360-degree rotating turret.

Type-26 (T-26): The most common Shade variant during the Covenant War. The T-26 Shade has interchangeable components, allowing for the integration of fuel rod technology, additional armor plates, or upgraded shielding.

Type-27 (T-27): This lightweight Shade appears to have been developed for Covenant special forces, and is accessible enough to be self-deployed by Unggoy gunners. After the Covenant War it also appeared in the armories of various human insurgency groups, where its firepower and relative portability were highly prized. All T-27’s are equipped with a rapid-fire plasma cannon similar to that used on the prow turret of Phantom dropships.

Type-29 (T-29): According to interviews with Achoem artisan-armorers, the Type-29 is one of the oldest Shade variants still used by the Covenant. Its storied history stretches back hundreds of years and dozens of conflicts. Though empirically inferior in firepower and accuracy to most other Shades, the Type-29 was preferred by particularly pious shipmasters due to its antiquity.

Type 55 (T-55): The T-55 variant is of particular interest for UNSC analysts, as several of the captured examples on Requiem do not bear the manufacturing sigils that could be traced to Achoem workshops. It’s likely that Jul ‘Mdama’s Covenant forces maintain a number of skilled weapons technicians in their ranks. 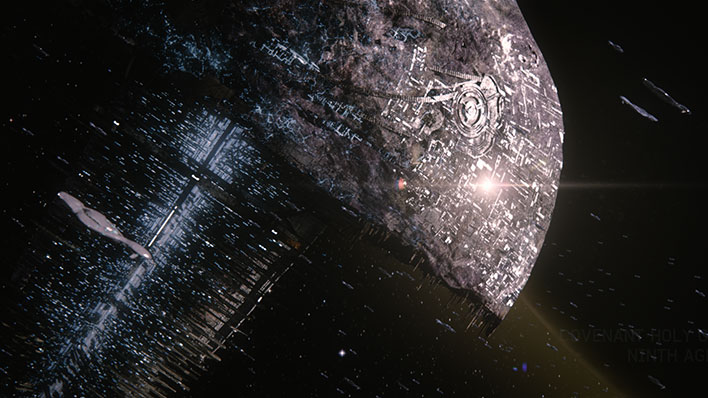