This has become my primary account for H5.(for other see the GT: Dj Organum) I like to call my style as casually competitive. Winning is fun. But I hate nights of constant loss. Used to have local sponsorship for H2, but that was years ago and the skill curve slipped away from me. But I just can't seem to leave Halo.

Most likely to find me on Fiesta but I'll play just about any game type.

One of the 'rare' that play with Pashooter and my sensitivity Varies based on how my shot is after a few games but mostly stays around:
2 horizontal
3 vertical
1 acceleration
inner and outer dead zones at 0%
also have Assasinations turned off for speed of play reasons.

have socials but not putting them up. Just ask if it's really that important.

Work in the cable industry so I do generally have awesome internet :D 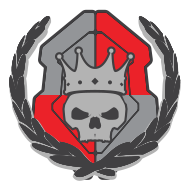 We are a Spartan Company that you must be proud to be a part of. It is a fun and chill of individuals that are here to kick some a**. There are five rules you must abide to be a Deathly Sir.

If you do not abide by these rules then you will be disbanded from the company and will not be given a second chance.

In addition, our company will be hosting frequent tournament every few weeks for real prizes to the winner. Each tournament will be different for various games types and custom maps. As well, we encourage our members to use the club to look for a group or start a party chat to meet other members of our company. Find what meets your criteria and game on.

We wish you the best of luck.

Not a huge fan of BR start so far. Feels super slow. I miss the pistol at start and personally I would love to see range nerfed on the pistol. But if BR starts are where it's going bring ar back as close range, nerf the range a little on the BR b...