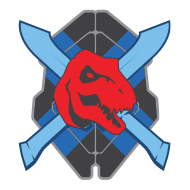 Risk is always part of warfare

We are a Spartan Company dedicated to handing out some spankings in what ever game type we are playing. We are a group of active experienced players who are looking for some new recruits. We like to be serious as well as casual. Also there's no drama with our company. We run a tight but relaxed ship. Message Admiral Gibbs on Xbox live for fastest response.

"There are thing when in the universe that are simply purely evil. A warrior does not seek to understand them, or to compromise with them. He seeks only to obliterate them."
―Grand Admiral Thrawn

“Direct action is not always the best way. It is a far greater victory to make another see through your eyes than close theirs forever.”
—Darth Traya/Kreia

"To defeat an enemy, you must know them. Not simply their battle tactics, but their history, philosophy, art."
―Grand Admiral Thrawn

"The man can have anything
if he is willing to sacrifice.
With your birth comes a solemn vow,
you will have nothing,
your privilege is the dirt.
In the darkness,
only ambition will guide you.
The oath you swear,
the promises you make,
they are yours alone.
Your freedom,
will be the wars you wage
Your birthright,
the loses you suffer.
Your entitlement,
the pain you will endure.
And when darkness finds you,
you will face it alone."
-Emperor Valkorion

"You do not have to stand against me, for I shall share all of this with you. If you will only kneel."
-Emperor Valkorian

"I will start my operations here, and pull the rebels apart piece by piece. They will be the architects of their own destruction."
―Grand Admiral Thrawn

"My apologies, Captain Slavin. I'd forgotten not everyone is able to appreciate art as I do."
―Grand Admiral Thrawn

Thrawn: "The Emperor recently promoted me after my victory at Batonn."
Kallus: "Civilian casualties outnumbered the insurgents at the time."
Pryce: "Acceptable margins, Agent Kallus, for there are no longer rebels in that sector."
―Grand Admiral Thrawn

I’d definitely play If I was sent an invite. Pretty sure I signed up for halo insider.