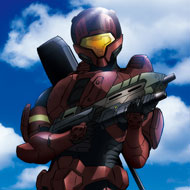 For we are all equal

Name and Founding Motivation
Avalon is the name of a hidden island where King Arthur is brought to after getting severely injured.
A secret place filled with magic, wonders and perfect harmony.
When founding this company we felt that Halo was,still is and probably always will be a place very special to us! So much for the name.
This company started out as a small group of friends wanting to show their affiliation by belonging to a team with a name.
Again like King Arthur and his men sitting at the Round Table we wanted everyone in our group to have equal rights. And we still do as our Motto shows.
Growing Together
After 343 released the achilles armour our motivation to work and grind our way towards it grew daily.
So we started looking for players that share the same feelings we have for Halo and who wanted to accompany und support the team on our way towards the achilles.
It took quite some time to find players and in the beginning it was just a loose gathering of gamers who had one goal in mind.
However by playing together we discovered that we had tons of fun. As we consist of members from all over the world we learned to enjoy our differences and laugh as a group.
Recruitment
Important Update for everyone that is interested in joining Avalon!!!
We are not accepting any new members as we are only 4 commendations away from the helmet!!!
We feel that anyone who would join now would not even nearly contribute as much as we did!!!

If you are still looking to get a part of our community just send an application to the new company i will create.
Goals
We have finished all commendations for the achilles body armour. That means if you are interested in joining us you won't be able to get it anymore.
We are putting our focus on the helmet now. With 96% of the kill commendations finished it will only take a few more weeks but we will get there eventually. The grind is real.
After obtaining the achilles helmet i will found a new company out of two reasons. There is a few players that joined Avalon after we got the body armour and starting anew means we are going to get the req packs for every commendation again as well. So if you want to join us on our way just send me a message. Don't hesitate to apply even though the maximum player cap is reached because everyone who is inactive will be replaced be more active players after a while.

What Are Your Thoughts on Breakout 2.0?

don't no still got to play it.