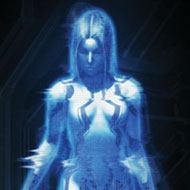 Created using a flash cloned copy of Dr. Catherine Halsey's brain. Twenty flash cloned brains were created, but only two survived; one of the two survivors was used to create Cortana. The neural pathways of the cloned brain were scanned and copied through a process called Cognitive Impression Modeling. On November 7, 2549, Cortana was first activated on Reach. Her first words were "Quando il gioco è finito, il re e il pedone vanno nella stessa scatola." This phrase translates to "When the game is over, the king and the pawn go in the same box." The phrase was spoken by Halsey's mother after their first game of chess. She was one of at least two A.I.s that were created from Dr. Halsey's brain, the other being her predecessor, Kalmiya, who was a similarly smart A.I.
On February 11, 2550, Dr. Halsey was performing a series of tests when she discovered that Cortana had removed the viral termination code that she had implemented. Halsey could not figure out how she did this.[6]
Meeting John-117
“They let me pick. Did I ever tell you that? Choose whichever Spartan I wanted. You know me. I did my research. Watched as you became the soldier we needed you to be. Like the others, you were strong and swift and brave. A natural leader. But you had something they didn't. Something no one saw, but me. Can you guess...? Luck.”

2. Basic rules- There are rules that all members must follow.

3. Company activities- We have a few ideas but may need more.

4. Dominating all over the Universe!

Thank you! that was very informative and helpful! :3