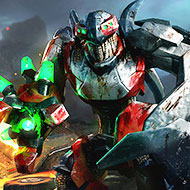 ONI7 is a skilled, hyper lethal asset. ONI7 Started her military service as a ODST and distinguished herself in combat as a Hyper Lethal Vector and being able to survive when all her comrades wouldn't however, psychological evaluation has attributed her anti-social tendencies and communicative problems with the psychological trauma of losing numerous comrades. The Office of Naval Intelligence decided ONI7's skills were better used in high value operations and was drafted into a specialized ONI ODST unit taking part in various high risk, high reward operations and again displayed her ability to survive when others couldn't. After the breakout of the Human-Covenant war ONI7's prior identity was declared KIA. She was immediately sent to Reach to receive training from distinguished SPARTAN III's to improve her combat and technological effectiveness. Upon the completion of training ONI7 boarded the ship DATA EXPUNGED to take part in Operation DATA EXPUNGED and was presumed KIA after not returning. ONI7 was later found drifting in space in the abandoned ship in a cryo pod 7 years later being the sole survivor of a covenant attack and received treatment for PTSD caused by the incident.

ONI7 would continue to take part in various operations all throughout the Human-Covenant war. She is credited with the killing of countless high ranking Sangheili and Jiralhanae, even attempting to assassinate Thel 'Vadam however this was a rare case of ONI7 not being able to yield results. ONI7, after years of non-stop missions separated only by short bursts in cryo sleep, was ordered to stand down and take shore leave. ONI continued to monitor ONI7 in civilian life which she failed to adjust to completely. She actively avoided all social interaction and couldn't function in such a undisciplined environment. Any UNSC commanders must take into consideration ONI7's lack of ability to communicate effectively with people and should only consider her for solo operations.

ONI7 has recently been drafted into the SPARTAN-IV program and has underwent vigorous training and has received exclusive ONI augmentations not given to the typical SPARTAN-IV candidate. The trauma of the augmentations on ONI7's physical and mental health have been notable however with the rising forerunner threat ONI has deemed ONI7 too high value a asset to put out of commission even temporarily.

Yet still strong enough to warrant staying in this thread, replying paragraph after paragraph to any throwaway fanboy post that even slightly irks you. :^/