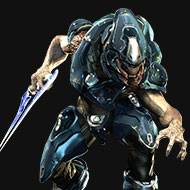 Gek 'Lhar was born October 19, 2499 on the island of Alytcos on Sanghelios. 'Lhar served ruthlessly in the Covenant during the Human-Covenant War, and after the war, he eventually became a field commander in Jul 'Mdama's new Covenant.

In December 2557, Gek carried out a terrorist attack on Earth. He was subsequently detained and interrogated at ONI's Midnight Facility; however, he managed to escape in February 2558, killing several of the facility's personnel in the process.

My thoughts on Jul 'Mdama

Thus you have conceded to Jebbadaya's original point; that is, Jul is capable of manipulating situations so that they play into his own hand. Of course Jul has his flaws, and this what makes him a character as opposed to a mere cipher. For one, b...