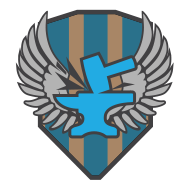 "Eken Vellen a Indurar."
(We Will Endure)

Originally founded by KingOfYou115 back during the times of Halo: Reach, the Super Human Assault Team was a small PMC-style clan. It broke away from another small clan at the time, known as the Brotherhood of Blood (and now known as Battle Llamas). During this time, the Super Human Assault Team participated in four wars, all of which were short-lived and ended with victory.
Activity then dropped until early 2015, where S.H.A.T. reestablished itself in the Master Chief Collection in preparation for Halo 5: Guardians. Nothing major occurred during this era.
In December of 2015, when forge dropped for Halo 5: Guardians, S.H.A.T. established its presence in that game. It's original clan base, assembled at this time, survived both battles it participated in. The base was also loaned to Hark Media to produce a machinima, "George Short: The Whale."
Nearly a year later, in late 2016, S.H.A.T. merged with the clan Fireteam Mythical Officially leadership had been passed to Suleric, however the original founder was still a Lieutenant in rank among the other members of the clan and acted as the leader of his section.
Starting in 2018, S.H.A.T. proceeded to separate off as Fireteam Seraph, lead by King, and leadership was passed back down to him by Danks as the latter switched clans. Construction of a new headquarters was underway, however budget issues would lead to the headquarters being designated as a small Foward Operating Base and known as Fort Sandstorm. A new headquarters was being planned at this time.
In May of 2019, Seraph rebranded itself as Amoni Corps. The headquarters was still under construction and plans were modified to account for this change, and Outpost Keto was constructed for diplomatic and recruiting purposes. Amoni was also offered a division within GOLDPACK, however this was rejected in favor of continuing the development of Amoni.

how long is this flight session? i cant find anything about it