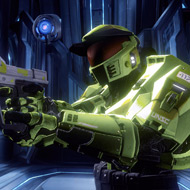 I've been playing Halo almost religiously since November 20th, 2001. I played Halo:CE competitively on Gamespy and XBC under the moniker [SEALS] PsYcHoSiS. In Halo 3, I earned seven playlist 50's on this, my original account, and reached Top 10 Halocharts Global Leaderboard on two separate occasions, over a year apart. I was a member of arguably the best Ranked Big Team Battle team, as well as being one of the best/most known players in the Team Snipers playlist, being one of the first to earn a 50 in that playlist, and subsequently earning a Five-Star General on it. I finished Halo 3 with one of the best accounts--original or otherwise--in terms of stats.

I feel your pain, man. In fact, I'm quite sure my average k/d spread in a loss is higher than +13. Don't believe me? Take a looksy at these little repressed memories of mine: