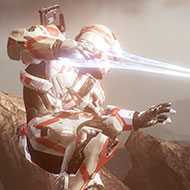 W3lcome Spartan.
The United Nations Space Command, more commonly known as the UNSC, is the military, exploratory, and scientific agency of the Unified Earth Government. The UNSC formed halfway through the 22nd century as remnants of old cultural ideologies clashed for supremacy in the Sol system and mainly oversaw United Nations military operations in space. The UN massively militarized its off-world colonies via propaganda and then defeated communist and fascist forces in the "Interplanetary War" which consisted of several side-battles that took place on Mars, the Jovian Moons, and the South American rain forests. Although the Interplanetary War brought great suffering and death unto Earth and its colonies, it united humanity's militaries into a common, armed force by the end of the 22nd century.
Code Three-Nine-Two is a UNSC code term brandished by Special Warfare teams to ignore hails from other forces due to a higher-priority mission. Dr.Halsey used this code when Vice Admiral Danforth Whitcomb hailed her over Eridanus secundus when she was fleeing in the Beatrice. The Admiral took it personally, interpreting it as though Dr. Halsey had "just told me to go to hell."
RECEIVED (trans) 04.1.7.0317
via x-process 02775.2.32.939444
(process owner BW - AI - Class III)
You slave, toil, bleed and sweat for your food. And we shall eat it.
392

You want to wait 5 years in between a Halo FPS... nah man. That's too much