When things get rough they send in the elite of the elite, the legendary Recon unit “Last Hope” each member has their set skill and ability in combat. They usually operate alone and have been known to kill an entire squad as well decimate entire strong holds on their own and capture key choke points through the universe. Many believe they no longer function or operate, but that has always been the main objective as a black operator contracted killer. To do all the work and never be seen or leave evidence behind unless on purpose, for the past twenty years verything has been quiet in the universe until this point when someone mentioned seeing the emblem of a “Last Hope” operator in the area.

Recognized by many Sangheili as a sworn blood brother

Ranks bestowed on as San'Shyuum and Honor Guard

Ship Escort: SDV-class Heavy Corvette ( Covenant Corvette)
Ship Name: Nemesis
What specs does it have
Razgri is a well-equipped Covenant Destroyer that was taken during a Off world raid of the Operation team M1, for troop transportation it is equipped with Condors and Falcons. For ship raiding or boarding there is a fleet of AI commanded Cyclops on board. Main Weaponry consist of two tactical Nukes, 20 Missile racks, 30 Laser orbitals and a Gene 3 Pulse Canon on port

The Corvette is mostly equipped with Radar jammers and high capacity space sensors, It operates in close proximity of Razgri for fighter support with multiple Banshee, Falcons, and Ticks for boarding. Primary weaponry are Lasers, Enhanced Rail cannons with a Modified port that has access to a Gene 2 Scarab Cannon.

Mercenary Discord Server (All welcome) message me for info 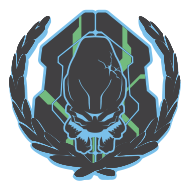 As one we rise, apart we fall.

Sangheili Separatist Clan. We are not strict to roleplaying we are only together as a family. Contact xCrummykarma for the discord invitation.

Tell Us About Your Spartan

and this one xD