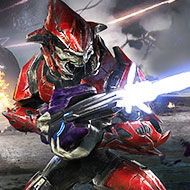 You can thank me for a variety of maps/modes that are still being played & remade for Halo (and gta) to this very day.
My creations: Toilet, Smear the Quear, Sharks n Guppies, Hide and Seek and GTA 4 Liberty City to name a few.

Starting out as a division leader for a 4000+ member clan back in Halo 4 and working my way up to Division Leader; gradually taking on several recruiting roles for certain divisions across a wide array of clans/guilds, I don't easily shy away from the responsibility of leadership. This clan works on a hierarchy structure, assassinating a leader outside of a training-match is a sign of disloyalty, and will not be rewarded. -- This clan has been created awaiting the release of Halo Infinite, and will be thereof solely a Halo Infinite clan -- DO NOT join this clan if you are not competitive, this clan requires players to be both casual AND competitive to join, not one or the other.

Rules
1. Treat 'every' member, including leaders with an equal amount of respect.
2. If you have a problem with any members, including div leaders you must address the issue to the founder/second in command.
3. You must have a mic to join, and participate in clan activities.
4. You may be promoted/demoted at any given time with OR without explanation. If you have a problem with a ranking change, bring it to the attention of the founder/second in command.
5. You are required to join in prioritised clan activities, these may include announcements, training, raids, clan battles and/or arena/warzone fireteam sessions.
6. Being derogatory to any players for any reason is strictly forbidden.
7. You must always listen to a division leader or above outside of arena/warzone matches. They are chosen for their ability to lead and organise a team based on tactics.
8. Rules are subject to change, not including this rule.

There may only be one Precursor and Curator at any given at any time, if the Precursor resigns, the Curator will take their place and a Division Leader will be tested for the empty Curator position. There is currently no limit for how many division leaders there are, this position currently depends on the gamemode, and timezone differences.

Promethean Rankings (Members)
Members can be promoted if they manage to impress anyone in a leadership role, you may also be promoted for being loyal and supportive to the clan, helping out in any way/shape/form will be noticed. It is also possible to become a leader through constant promotion although this will ultimately be your choice if the Precursor or Curator offers it to you. Below we have a listing of rankings, 1 being the highest and 5 being the lowest ranking you can achieve as a member. This however may be subject of change.

English spoken by the covenant is pretty fluent

Is there some form of cannon which states how they came to speak english, let alone so well? I mean sangheili shouldn't be able to with their mouths all jacked up...