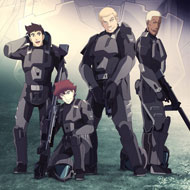 SPARTAN IV-Dreux Schneider is the commanding officer of Spartan Fireteam Phoenix. He is strange for being a Spartan IV, as he preferres to don the armor of Gen II recreations of Gen I armor sets. His reasoning was that Spartans of the past were considered Demons to the Covenant, and that the newer combat uniforms of MJOLNIR Power Armor were often times less menacing and strange; pointing out the armors like Shinobi and Achilles. Yes, they did see cool; but not entirely practical on the field of battle.
Little does Spartan Dreux know, but he was listed as one of the many hundreds of other soldiers to be placed into the Spartan II program's Beta Company; before ONI had shut down Spartan II production in favor of the cheaper and more expendable Spartan IIIs. Dreux Schneider was still supposed to be placed into the Spartan III Alpha Company, but was instead unable to be conscripted due to his homeworld being glassed. Lucky to have survived, and even luckier that due to lost records, the UNSC did not know that Dreux was alive for another seven years. By then he was too old to become a Spartan, until the coming of the Spartan IV program.
He has proven to be a valued asset of Spartan IV, with Fireteam Phoenix lead by the Color Sergeant in many theaters of the war between the UNSC and the Covenant Remnants. And now, he faces off against even the AIs that had supported him in many battles.

Assassinations and Playable Elites will eventually return. After all, they are planning to support Halo Infinite for 10 years. So a LOT of content will be added over time. Spartan Armors, Elite Armors, Assassinations, Poses, Visor Colors, A.I. Assist...