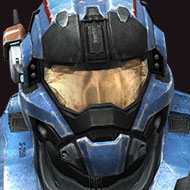 User has been suspended until 10/29/2552 5:00 PM PST due to Creating multiple or alternate accounts

___________________________________________________________________________________________________________________________________
Bio
September 5, 2533. This marks the birth of Augustus Hodges. Born in Cleveland, Ohio, he lived a peaceful life but he felt incomplete. He wanted to, he needed to join the UNSC. His parents disapproved of this thought due to his older brother Talos joining the UNSC. Augustus was alway fascinated with technology and destruction. He wanted to be a combat engineer in the UNSC Marine Corps. He enlisted into the Marine Crops in 2547 at the age of 18. He was the youngest in his fireteam serving under Sergeant Bowman. They were deployed on Meridian to stop the Covenant but failed. Augustus was the sole survivor. He would later be transfered under Stg. Johnson. There, the Covenant attacked Paris IV. Stg. Johnson had the idea to capture plasma grenade. This would allow them to hold off the Covenant allowing them to evacuate to orbit. Augustus would be in many more battles but his most notable was at the Fall of Reach. He was in charge of protecting civilians when a pack of Jiralhanae started attacking. They outnumbered the Brutes but were unprepared. Losing most of the marines, Augustus moved the remaining marines and civilians and set up shop. They placed explosives at the door. When they charged in, setting off the explosives, it just left the Brute Chieftain. He went absolute berserk! Mowing down marines left and right. Running right for the frighten civilians, Augustus barrel rolled grabbing a SPNKR blowing up the Brute. There, evac had just arrived picking up the survivors. He was awarded with medal and commendations. He was also showed promise by ONI standards. Achilles further proved himself at the Battle of Installation 04. He would become an ODST following up at the of Earth where he was drop from orbit to Cleveland. He fought hard and relentlessly but was forced to retreat. When he was on the Pelican he felt like he lost everything. After that battle, he fought mercifully. By 2554 he battle-harden and was offered a spot in the new Spartan Program. There he would meet his brother Talos who was going through the augmentation. They would talking about their war stories. His brother fought along side with Master Chief during the Battle of Installation 04. They would eventually be separated but still each other in War Games. 3 years pass and Augustus would be onboard Infinity. There he would participate in the first and second battle of Requiem with Fireteam Domino. He would also gain an energy sword from a fallen Elite commander. He would be stationed on Infinity for regular War Games exercises until he would be needed.
Extra Information
Service Number: 90047-28153-AH
Homeworld: Earth
Appearance
Age: 25
Gender: Male
Race: Human/African American
Eye Color: Green
Hair Color: Black
Pre-Augmentation
Height: 6'4
Weight: 210
Post-Augmentation
Height: 6'10 (Out of armor) 7'1 (In armor)
Weight: 280 (Out of armor)
Personality and traits
Laid-Back
Calm
Dedicated
Loyal
Relationships
Spartan Talos (Brother)
Members of Fireteam Domino
Spartan Miranda (Love Interest)
Commander Palmer (Commander)
Skills and Abilities
Demolition Expert
CQC Specialist
Strategist
Equipment
MA5D Assault Rifle (Custom)
M6H Magnum
M45D Shotgun
Type-1 Energy Sword (War Trophy)
Type-2 Gravity Hammer (War Trophy)
Combat Knife
Armor
MJOLNIR Powered Assault Armor/CENTURION
Armor Color: Black/Pepper
Visor Color: Clockwork

How can Osiris size up with a Spartan II