Name: Luke
Service #: G102
Unit: Gladius Company (Leader); S-III, augmented to S-IV
Primary Military Specialization: Reconnaissance, Commander.
Enlistment Date: February 19, 2539
Location: Unknown
Gender: Male
Birthplace: Reach
Birth Date: December 16, 2523
Performance: Excels in completing his mission, highly recommend for impossible operations. Highly lethal, doesn't leave an adversary alive unless they surrender or the subject is ordered to.
Comments: G102 is not easily angered, but when he is, it is highly suggested to not be the enemy. Recommended to keep him with his men. He does all the gun work, such as recommending loadouts for the OP, maintenance, and attachment work. Has friends in several black markets, and can move over large distances without detection.
NOTES: G102 was recorded beating a high ranking elite to death with his bare hands in front of the Elite's inferiors because he had mortally wounded one of his squad mates. He then proceeded to rip off the Elite's energy dagger, and take its sword. G102 performed first aid on his squad mate, and carried him five clicks through enemy territory to a pelican. G102 arrived at the pelican losing blood at a dangerous rate, and denied medical assistance so he could man the guns of the pelican.
Spartan's choice of equipment; Let it be noted that the subject always has his Magnum, energy sword, energy dagger (which he obtained from the field), and kukri.

Some of your Spartans previous engagements: Fall of Reach, Requiem campaign, several raids on rogue Spartan bases.
Current Operation: unknown
Notable Relations: His company, referred to by him as his family.
Service Commendations: n/a
UNSC Tenure/Years of active duty: 19 years and counting.
Letters of recommendation from previous commanders: 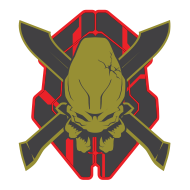 CLOSED TO REQUESTS TILL 95%.

Requirements:
First off, sorry for the inconveniences if you were previously looking at this yesterday or the other day. However we have decided to close it until it hits 95%. TNOA (The Noobs of Achilles), will be kicking off a little while longer but inevitably closing and starting back up at 95% too. If you're reading this in March I'm sorry, you probably won't get in.


Xbox Club:
Operation Gamma (OG) has an Xbox club that all members can optionally join. This is a space where you can share game captures and find lobby-up with members of OG and its allied companies. Visit the link below if you're interested.
The Alliance Xbox Club

Alliances:
Operation Gamma (OG) is willing to ally with most any company. Alliance rules are straightforward, you help us grind, we help you grind, and you will be welcomed as if you are a member of WDNA, while still retaining your autonomy. Allied members will also have allowances on our Discord according to their role in their company. Allied companies will be listed below.
Who Doesn't Need Achilles
The Noobs of Achilles
Team Head Hunters
Kirks Covenant

This post has been edited by a moderator. Please do not post spam.
*Original post. Click at your own discretion.
Spoiler:
Show
The Templar Order is recruiting! We welcome anyone into our clan! Must have a Mic and get discord.