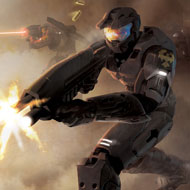 Halo Extreme Radical Awesome, or HaloERA is an EXTREMLY exclusive Spartan Company for only the MOST hardcore serious RP'ers (RP is for role playing, look it up). You must post your personal Spartan Bio in the forum (remeber the back story below). Remeber it is a COMPANY RULE that you must stay IN CHARACTER when playing with company members.*** We do not require you change ur GT, but it will help other ppl since they have to call you by ur character name.

(Note you can bring in ur fav chacters from other games/TV, but u must fit it in 2 ur char. backstory! See back story below:)

Obvs it will help a lot if you look at the forum for the character names, but therell be introductions in squad meetings/customs. Assuming you pass the MANDATORY interview with teh company commanders AND basic training. After basic youll be assigned to a squad (see back story)

Rules:
Banned Words:
As professional elite UNSC, members of HaloERA must treat eachother and the chain of command with solemn respect. In addition to cursing and other bad language, repeat usage of the following words will result in a COURT MARTIAL **may be expanded at commander's discretion**:

Back story:
The UNSC: El REY AUGUSTINE as the secret sister ship to the PILLAR OF AUTUM, used as a prototype for the UNSC INFINITY. It was loaded with the best and greatest stolen Forerunner and Covenant Tech, nuclear missiles, stealth fields, and triplet “genius-class” AIs, Ganymede, Titan, and Calipso. To top it all off, the soon-to-be-renamed EL REY AUGUSTINE with a multi-dimensional quantam filament portal, rumored to be Primordial in origin. After a reverse false-flag dead drop, ONI staged the destruction of the ship so it could be used for spec ops by a small rag-tag group of elite Super Spartans, who re-named it the UNSC: EXTREMELY RADICAL AWESOME after there purpose: to be the best of the best, of the best, warriors humanity could offer. Spartans are inducted and after rigouros training put into the following squads:

Squad Awesome:
Leader: MyExWlFE (Spartan M. 118)
Weapons experts who always grab the sniper and rockets… and know how 2 use them

Since we get so many recruits, we regret if there is not enough room, plz try again at another time!

*** kiwis and other australians must pass accent test

Here is my feedback for MCC xbox:

- The challenges menu is clunky. You can only pin one challenge at a time and they take too much real estate in that menu. You should really be able to pin more challenges the...