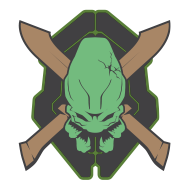 The Heretic Uprising, or THU for short, is a retired Halo company in H5. Messages sent to their creator & leader, Doc HarmoNic, may not be opened for weeks at a time as he is enjoying retirement until the release of Halo 6. The success of this company was so great that they eventually split the company in two. Thanks to the leadership of former THU Lt., Golden Ranger, his idea to start a sister-company to share Achilles with even more gamers became a reality under his new leadership. That company, Heresy Ascended, has also achieved Achilles and has snice retired. Between the two companies, nearly 200 gamers now sport the exclusive armor set in the name of skill, comradery and perseverance.

THU was a community of hard working men and women who've bonded together with the goal of achieving Achilles. Using their combined skills they braved the arenas, dominated the Warzones, & surpassed their goals. Now, proudly sporting the exclusive set, they are at rest after solidifying themselves as one of the top Halo Companies in H5.
_________________________________________

Letter from you Leader;
"We did it, the grind is over. This past year and a half has been a whirlwind of opportunity for not only myself but for others to branch out of their comfort zones and share a common goal with people from around the globe. We have members from nearly every time zone from California to Sweden and even some fellow heretics from Australia. We've grown from nervously partying up to talking nearly everyday through GroupMe or Xbox Live, it's been the freedom of this company that's kept so many involved. We never required an SR level, we never farmed, we never forced people to change their gamertags or appearance, and we never made fun of anyone of lower skill than ours. We got Achilles the honest way, which is why THU means so much to the men and women in this community. Thank you to all the members who made this what it is today, you are the true Uprisers. Current members are welcome to stay and grind out the final Company tiers, but our goal has been met and your service has been fulfilled. Enjoy your rewards, wear the helmet proudly, and see you all in Halo 6!"