Name: AGENT Rei Nagime
Service #: E-119
Unit: ONI, Spartan III, Lone Operative
Primary Military Specializations: ONI Acquisitions Specialist
Enlistment Date: November 24th 2534
Location: Jiralhanae Faction Leader Lydus's Ship (ally)
Gender: Male
Birthplace: Reach
Birth Date: January 13th 2522
Performance: He is a highly proficient soldier and assassin, though he has several failed attempts on assassinating Covenant Leaders such as Tartarus, Thel Vadumm, and the Prophet of Regret, he has shown his skill by bringing down several Insurrectionist and Covenant factions single-highhandedly during the post-Human-Covenant War era.
Comments: Shows extreme violence in the field and uses excessive cruelty on enemy units during all solo missions. Shows high disregard for sentient life, accepting and completing his missions with no attempt at minimizing collateral damage, and demolishing buildings after mission completion. Exceptionally proficient agility and stealth capabilities. Highly recommended for participation in future infiltration and assassination missions. Not recommended for implementation into a Fireteam, though he is quite proficient in small teams, he has split-personalities that range from anti-social to psychotic killer, making it difficult to properly cooperate with teammates during missions.
NOTES: Prefers to be isolated in most of his spare time, and in missions. He tends to have a quiet and kind nature, however shows very violent and sadistic tendencies to enemies, and noncombatants, in the field. Hums the tune Lacie that he claims is the last thing his victims hear.
Spartan's choice of equipment: GEN3 Gungnir variant. White and Blue paint scheme (black variant for stealth missions). Primary loadout consists of the SILENCED M395 DESIGNATED MARKSMAN RIFLE, M45 TACTICAL SHOTGUN, SILENCED M20/PERSONAL DEFENSE WEAPON, SILENCED SNIPER RIFLE SYSTEM 99-SERIES 5 ANTI-MATERIEL, and several explosive devices.
Some of your Spartans previous engagements: Assassination of several Insurrectionists Leaders (including on the outer colony of Talista) as well as infiltration into several Covenant Super Carriers and extracting sensitive data.
Current Operation: Under the command of Jiralhanae Leader Lydus, he is currently tasked with the elimination of all Rival Jiralhanae.
Notable Relations: Alpha-Nine, Thel Vadum, COMMANDER Palmer, Spartan B-312, and Doctor Halsey, AGENT Jameson Locke, Swords of Sanghellios, Lydus.
Active Duty: 24 years, (8 years in Cryo/ 4 years collectively/ 4 years from 2051-2055).
Recommendations: ONI Superintendent, GUNNERY SERGEANT Edward Buck, AGENT Jameson Lock, Thel Vadumm, COMMANDER Palmer, Lydus.
Aliases: The One-Eyed Reaper (Demon by Covenant), The Night Echo, Demon's Hand. 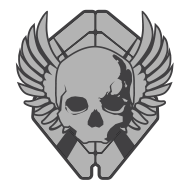 We are the plague!

We already have Achilles armor, you will not be getting it upon joining. If you still want to join, request and we'll review.
/// Description on why you want to join required\\\

We are a plague far worse than The Flood! We're the outcasts, the rogues & the cutthroats, malicious militants, fighting our way to the top, vanquishing all that stands in our way. United we rise, united we spread, united we stand! Warriors of death, with stealth and brutality, we feed off assassinations, collecting headshots as trophies & being top brawlers.

The Right Wing is made out of Officers, Four Horsemen and Leadership.

The Left Wing known as The Apocalypse, which are the most malicious rogue Spartans Halo has produced.
The Left Wing's agenda is to be established and pushed to succeed by Officers.
Each Officer leads a Fireteam and has the responsibility over the development of said Fireteam.

A Left Wing council can be called in by Officers and approved by the Commander whenever it's due.
Officers are the voice of the Wings, members chosen by Leader or through High Coucil
to perform specific duties within the Company.

Without each wing we simply wouldn't be able to destroy our foes! Each member should be treated with the utmost respect!
We fight with respect against our foes, but don't mistake our respect for a weakness, weak is something we are not.

The Nine is the Elite Brach of Wings of Pestilence, consisting of a fireteam of nine top members in our ranks, put together to eliminate any other company or threat that stands in our way to bring justice for the fallen that the UNSC and ONI are responsible for.
We spread, we change, we are!

Armor code: Primary Black (Allegiance) or All Black (Recruits).
Permission will be granted for armor color change from all black once you have played at least one game with one of our Lieutenants (earning your wings).
Once you have earned the respect of our members, armor code becomes non-mandatory (though it is appreciated if you wear black armor as a sign of Allegiance. Emblem: Black Background (Allegiance) // non-mandatory.
For recruitment >> Request to join on waypoint & contact Officers and/or Leader on XBL (gamertags above).
If you can't take a joke, have fun or take yourself too seriously - don't bother requesting to join.

Yes but each Halo game has created power weapons to be power weapons. To fit this new speed the weapons would have to either be weaker or the Spartans more durable.