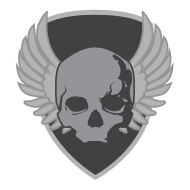 Beta Company was the second company of the Spartan III program commissioned by the Office Of Naval Intelligence: Beta-5 Division. The operators selected for the company were orphans aged 6 or younger who survived the glassing of their home worlds' in the outer colonies. Beta company would engage in numerous classified operations throughout the Human-Covenant War (including Operation: TORPEDO, Operation: CARTWHEEL, and the Battle of Reach) and would suffer extensive casualties. Beta Company now exists as a homage to the Spartan IIIs of the original Beta Company who gave their lives to defend humanity in our darkest hour.
Beta Company Roster:

Oh man, I don't even want to know what that would do.

I think it's definitely possible to add skulls to each game, we'd just have to give them time to do it. I'd love to see some of the other skulls added like Malfunction.
...