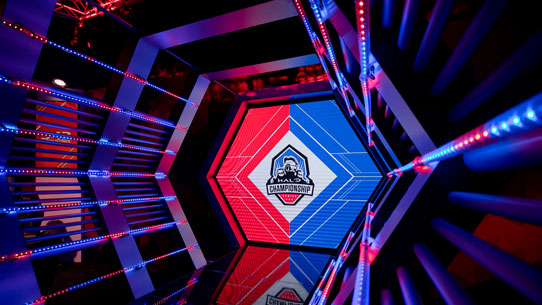 Hey everyone! I know many of you are slaying some Bots in Halo Infinite’s Tech Preview at the moment, hope you’re all having a blast and thank you so much for stress testing our systems as we prepare for launch. Welcome back to another installment in our blog series, Designing the Halo Esports Ecosystem. The goal of this blog series is to detail how we are working to develop a healthy and sustainable ecosystem for Halo esports. If you’re interested in our philosophical approach to esports as a fan, player, team, tournament organizer, or sponsor, then this blog series is for you! If you’re hoping to learn specifics about format and roadmap, stay tuned, more info will be released as we get closer to the launch of Halo Infinite.

Today’s blog is pretty special. We’re detailing some critical information that will have a really huge impact on the ecosystem from players to Teams, sponsors, operators, and everyone in between because today we’re talking about competition platforms, competitions inputs, online platforms, and more.

For decades, war has been waged between gaming platforms of every kind as their loyal fans have served as foot soldiers on the virtual battleground that we call the internet. Thankfully, the gaming industry has taken a turn for peace as more and more players are brought together as games are offered on more and more platforms and Halo Infinite is no different. Halo Infinite is the first Halo game to launch simultaneously on PC and two separate generations of Xbox consoles and will feature cross play. For nearly two decades Halo esports was exclusively on console and whatever platform we decided on would have a really massive impact. We understand the gravity of this decision.

We’ve been preaching our philosophy all year long – Halo Infinite esports is an open ecosystem. We want to lower the barrier to entry everywhere so that we can grow the community as much as possible. The more players competing then the more competitive and healthy the scene is. And as we stated in our original ecosystem blog, we believe in cultivating and uniting communities. We want Halo esports to be bigger than it ever has been. We wanted to build a world where all that mattered was that you were a Halo fan and that was it.

With all that said, we’re excited to reveal that Halo Infinite esports will be cross play for all online tournaments. Have a beefy PC rig? Great, you’re ready to compete! Have a last gen console? All good, you’re ready as well! Just got your hands on a sweet new Xbox Series X? Nice, you’re all set!

We had so much to consider in this decision including player experience, tournament experience, as well as our partners in the ecosystem such as Teams and Tournament Operators. What we envisioned was an ecosystem where players had the choice. Where if they had one platform, they weren’t forced to get the other if they wanted to compete. Where Halo Infinite was suddenly a game they had the choice to play when it wasn’t in the past because of the platform they had already decided to invest in.

Keen readers probably noticed I said “online tournaments” above. So, what does this mean for LAN events. Halo Infinite esports LAN events will be tried and true open events where anyone can sign up and compete, for the chance to work your way up from the open bracket into the pro championship bracket. This means that, especially for a new Halo game, we’re anticipating having more teams onsite than any HCS event ever, and maybe any Halo event ever. (We’re coming for your record, Halo 2!) To accommodate this many teams while having a smooth 3-day tournament experience that’s as competitive as possible, we’re needing to go in a direction we’ve not gone in before. In fact, we find ourselves in quite a unique scenario in all of esports when you factor in the platforms and formats, and this is newer territory not only for us but really for the industry as well. If you’re a pro player that starts an event weekend from pool play where you compete on mainstage and featured stations, you’ll be playing on PC. If you’re a player competing in the open bracket, you’ll be playing on the Xbox Series X. If you’re a player that makes it out of the open bracket and into pool play and/or championship bracket, you’ll be transitioning to PC mid-event.

Whoa Tashi, this is a lot of news to take in. Can you go into more detail about why it’ll work this way?

Of course. Alright, let’s breakdown the alternative scenarios that we felt were the most realistic to explore.

We decided against alternative scenario 1 because we knew for the absolute pinnacle of Halo competition, with millions of dollars on the line, that PC was the platform that's become the standard in esports. We also knew that this was what a lot of players were wanting especially after running MCC tournaments on PC.

Alternative scenario 2 was the other scenario we spent the most time working on and was our first idea of what we wanted to go with. After months and months of deliberation and consultation with Esports Engine (who we worked with hand in hand), we decided that at the scale we were looking to run these open events, logistics would not allow us to go all PC. It’s important to keep in mind that these are fully open events with hundreds and hundreds of machines for players to compete on. When we have to factor in managing all of the hardware and parts (some of which may be damaged during shipping from event to event), the increased number of variables that come into play on PC (software and hardware), drivers, networking configurations and much more, we realized that the potential for issues to arise and the event to get massively delayed and behind schedule was far too great to risk.

You might be wondering, “Well Tashi, what about DreamHack Anaheim 2020, that was all PC wasn’t it?”. Yes, it was, and that provided very valuable information for us. Ultimately that was a 64-team open bracket on Halo: Reach and we’re hoping to more than triple that for major Halo Infinite LAN events. With an Xbox Series X, there are significantly fewer variables, and from an operation standpoint we have full confidence that the event will be run smoothly, and it will be a great tournament experience.

Alright Tashi, that all makes sense. How’s it going to work for the open bracket teams who have to transition from Xbox Series X to PC?

Great question and one that’s important to us because we knew it was going to be one of the more unorthodox parts of the experience. It’s worth noting that Halo Infinite will run at 120fps on the Xbox Series X which is twice the framerate as Halo 5. This will be without question the best, most competitive console Halo experience ever.  And from a gameplay perspective, there are no differences. The maps are the same, the modes are the same, the mechanics are the same, etc. To accommodate for players coming from the open bracket, they will be given an allotment of time and exclusive access to warmup PCs before jumping into their next matches to quickly acclimate.

Yet another war has waged on for decades in gaming and that’s the one of Mouse & Keyboard vs Controller. Once again, however, our aim is not to arbitrarily try to settle the score and just pick one over the other. Our aim is to be as inclusive as possible to grow the competitive community around the world. Because of that, we are going to allow players to compete on controller or mouse and keyboard regardless of platform. This means you might see entire teams on controller, entire teams on MKB, or teams with mixed MKB and controller players. We will also allow for MKB players to play on the Xbox Series X at live events if they’re in the open bracket. For those who didn’t compete in Halo because it wasn’t available on PC and was controller only – we welcome you with open arms and wish you the best of luck in the scene.

We’re so excited to see this entirely new dynamic come into play, Halo esports will never be the same again. As always but especially now with so many new elements, we will be watching how the scene develops and how the tournaments unfold to ensure competitive integrity is maintained.

This section is certainly not as glamorous or exciting as the sections above, but this section has critical information for players looking to compete. At prior Halo events, all accounts were provided by HCS and the operator, and so players just needed to sit down and play. This will remain true for the open bracket at HCS events. You will sit down and play on generic accounts that have been provided to you. However, for mainstage and featured station play, we are requiring all players to log in with their personal accounts. I repeat, if you are playing on mainstage or on a featured station, you will be required to log in with your personal account that you compete online at home with.

Got it, can you talk about why?

There are a few reasons why we’re changing this:

On top of this, each player who competes on PC will have their own SSD (Solid-State Drive) assigned to them with their PC configurations set and ready to go after initial setup. When a player is not competing or warming up at the dedicated warm up stations, their SSD and peripherals (controllers, MKB, etc) will be locked away backstage. This will keep the equipment safe and ensure that it won’t be tampered with during the tournament, thus ensuring greater competitive integrity. This is standard for major esports titles that operate on PC.

HCS for Halo Infinite will feature a point system that will be used for seeding (and sometimes qualification) that ties the entire ecosystem together. Players will be able to accrue points in the scene from multiple sources including Official HCS tournaments both online and in-person, but also HCS Grassroots tournaments in the scene. To track of all of this, HCS will be leveraging the Esports Engine platform. Players will need to register an account on the platform to compete in any tournaments that award points. The EE platform will also manage official HCS events that we run with Esports Engine. This means that for Esports Engine-operated events, you’ll buy your team passes, finalize your roster, see brackets live, and much more right on the platform. This will make tournament operation more efficient for Esports Engine, resulting in a stronger player experience.

Halo Infinite is a game that is more open and accessible to players than any prior Halo game and HCS is following suit. With players competing on any platform as well as controller or mouse and keyboard, we’re hoping to have a deep competitive scene with fresh blood entering the scene at launch and beyond. On top of that, we’re working to ensure a better onsite event experience than ever before with our partners at Esports Engine.

Thanks to everyone for reading – can’t wait to dig into the reactions and feedback. Feel free to drop a line on Twitter. Now let's go shoot some more Bots!