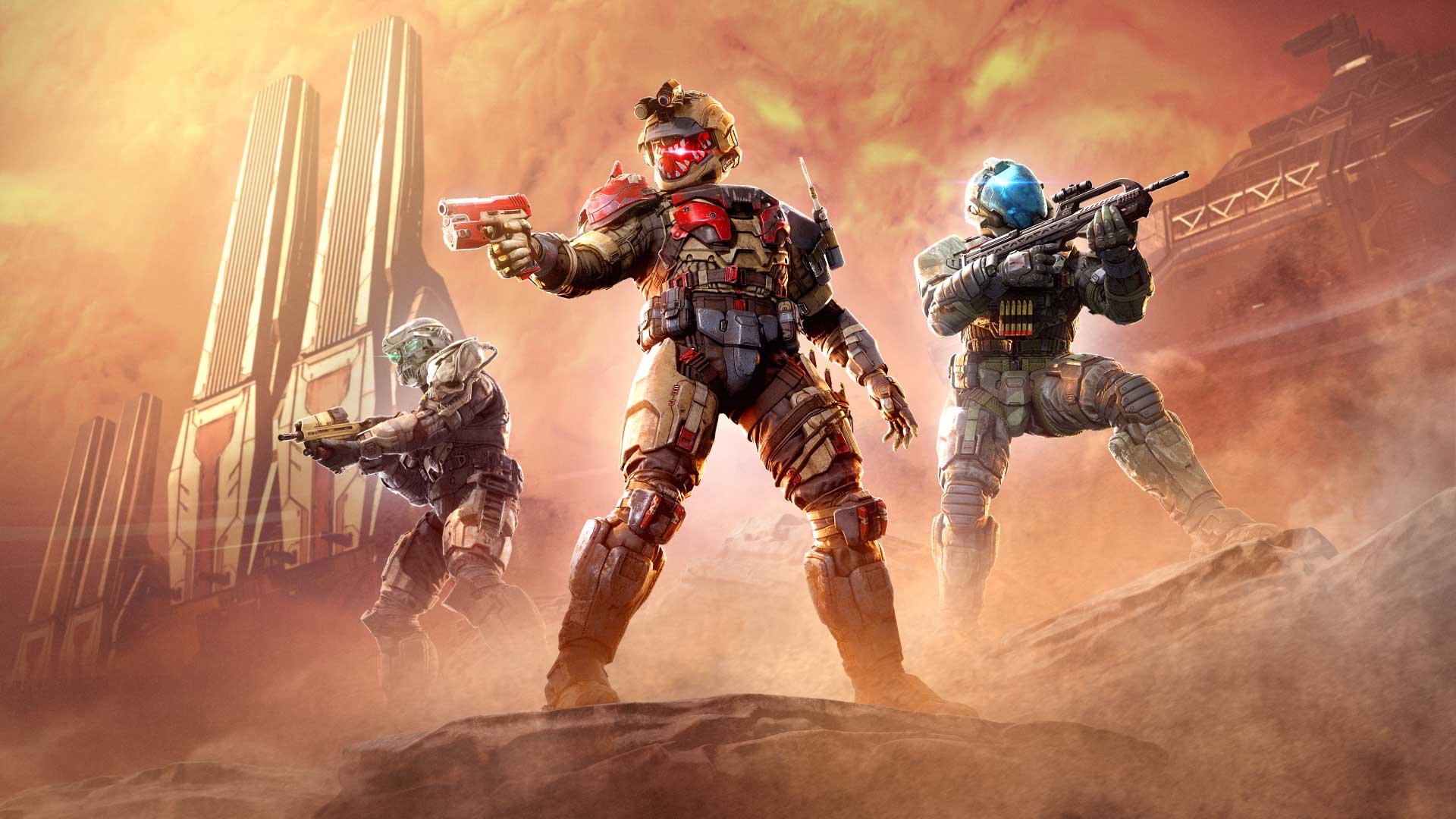 Twelve years ago, you were asked to “leave that lone wolf stuff behind” as the Covenant descended upon Reach and our last hope was carried by the noble sacrifice of a team of Spartans…

Today, we’re in a very different galaxy, and that lone wolf stuff? We need you to bring it all, Spartan.

Let’s dive in to learn more about what awaits you! (Additionally, you can view the full patch notes for Season 2 on Halo Support.)

In case you missed it, some of our intrepid team members walked through a number of the highlights of Season 2’s content (including a thirty-minute deep dive into the Battle Pass) which you can check out in the VOD below.

You can also head over to the Halo Waypoint Seasonal Hub which showcases the Premium Battle Pass, new maps and modes, the seasonal story, and more!

Hunt, scavenge, survive. RAKSHASA is an all-new free armor core that epitomizes the ‘Lone Wolves’ theme by incorporating scrapped, damaged, or otherwise discarded equipment utilized by the UNSC and the Banished.

Contrasting the classic, sleeker styles of the MARK VII and MARK V [B] armor cores, RAKSHASA brings a distinctive, rough, battlefield-manufactured look, adorned with trophies that may evoke familiar memories for long-time fans, like the Skullbearer Trophy which features a Sangheili skull affixed to your shoulder pauldron.

Available as a free unlock in the Event Pass for Season 2’s Fracture: Entrenched Event, the EAGLESTRIKE armor core offers players an assortment of imposing, steampunk styled customization options that will make even the most battle-hardened Spartans think twice before taking you on.

In Season 2, players will play on two brand new maps: Catalyst and Breaker.

For a full breakdown of these maps, check out our map preview blog!

Enclosed within the cavernous depths of an abandoned Forerunner structure, Catalyst is the newest Halo Infinite arena map in Season 2.

New modes bring new ways to play on both old and new maps! Season 2 arrives today with three new modes, along with a plethora of mode variants.

For a full exploration of these modes and how some of them have changed, check out our modes preview blog!

KING OF THE HILL

The return of the king (of the hill)!

The king returns with an iteration on one of Halo’s most iconic modes: King of the Hill.

A neutral “hill zone” spawns on the map. When a player enters the zone, it is immediately captured and begins awarding progress to the respective team’s control bar. When a team's control bar is full, they score 1 point and a new zone spawns in a different part of the map. The first team to reach the score limit wins.

Divide the enemy, conquer the zone!

Land Grab comes to Halo Infinite during the Fracture: Entrenched Event and will remain available throughout Season 2.

Coming to Halo Infinite today as part of the Interference Event, Last Spartan Standing is a free-for-all attrition-based game mode.

12 Spartans spawn individually on Breaker with a pre-determined loadout and 5 respawns. All 12 players will fight for survival, accumulating personal score to power up their loadout.

As the match progresses, players that run out of respawns will be eliminated as the play space encloses until only one Lone Wolf is left standing. After the Interference Event concludes, Last Spartan Standing will remain playable for the entire Season and will expand to being played on other BTB maps too.

As Halo Infinite continues to evolve, so too will the Events that arrive each Season. From the moment you jump into Season 2, you will be taking the next step in your multiplayer Spartan’s story…

Serving as the inspiration for Season 2’s overall theme, the Interference and Alpha Pack experiences are the first narrative-driven multiplayer Events in Halo Infinite.

Launching as two separate events during Season 2 and spread over several months, both the Interference and Alpha Pack events continue what began in Season 1 with our introduction to Spartan Commander Agryna, putting your customized multiplayer Spartan into the story.

This is the start of an engaging, multi-season storyline that centers your Spartan in the thick of the action (and yes, they will appear in the season’s cinematic!) which will progress alongside the Season.

Enjoy Last Spartan Standing focused challenges coupled with a unique, free 10-tier Event Pass for Interference, and another for Alpha Pack later in the Season.

Head over to the Halo Waypoint Seasonal Hub and be sure to check out the new INTEL section, where you’ll find excerpts of conversations and communiques providing some background lore for the goings-on in the seasonal story.

Fracture: Entrenched is the second Fracture-themed event to come to Halo Infinite and kicks off on May 24.

Similar to Fracture: Tenrai in Season 1, the Entrenched event will run for six separate instances in Season 2, each occurrence lasting one week, allowing players plenty of opportunities to complete the Event Pass and collect all their rewards.

The Season 2 Premium Battle Pass brings 100 tiers of new rewards for you to unlock, including 1000 Halo Credits that can be spent in the Shop!

Play matches, earn XP, and unlock Lone Wolves-themed rewards at your own pace.

Among the many rewards that you’ll be unlocking as you progress through the Battle Pass, let’s take a closer look at a few of them…

To ensure clarity here: the free pass does ‘expire’ at the end of a Season, meaning that to switch back to Season 1 you will need to have the Premium Battle Pass.

The offerings of the free pass for players are another great bit of community feedback we’ve sought to improve on for Season 2. If you’re playing on the free pass for Season 2, you can look forward to even more free customization item rewards. Where Season 1 had 26 rewards in its free pass, Season 2 has 46.

The Academy is where your Spartan’s journey begins. Here, you can learn the fundamentals of Halo’s gameplay—get a feel for movement and ordnance, meet your personal AI, run weapon drills, and set up matches against bots for some practice or warm-up rounds before heading into online matchmaking.

Not only have we made improvements to bots around vehicle and objective play, but in Season 2 you can look forward to new Training Mode options to further customize how your practice matches play, giving you more granular control than ever.

Mirrored movement and shooting is an option that began as a means to support players who use Accessibility controllers where the bots will match your behaviors. If you’re moving and shooting a lot, they will move and shoot as well, and they will stop when you stop.

Players can also look forward to the popularly requested endless weapon drills launching on day one in Season 2 as well.

King of the Hill and Rumble Pit will be added as new playlists, and throughout Season 2 you can expect to see an increased rate of rotational playlists.

When you jump into Season 2, the playlist selection will be as follows:

Speaking of which, here’s a look at some of the new mode variants which will be going live in the Rumble Pit playlist:

Vampireball: In this Oddball mode, the Skull is a one hit kill and has 50% Shield Vampirism. Score a kill with the Skull at full shields to start building up that Overshield!

Rocket Repulsors: Infinite ammo Rocket Launchers and Repulsor loadouts, with only Repulsors and Power Equipment on-map. Deflect your enemies’ rockets or propel yourself over their explosions to safety!

Season 2 will feature some limited time rewards you’ll definitely want to get your gauntleted gloves on!

First and foremost, a suite of familiar classic emblems (and nameplates) are back and looking just a little bit fancy for the occasion. Enjoy Club, Spade, Heart, Diamond, and Fleur-de-Lis in your inventory when you log into Halo Infinite today.

Interference, our first narrative event of the season, is also bringing a gift of its own. Jump in anytime during the two-week event and you will get the Lone Wolf Emblem and Nameplate.

The month of May also marks the occasion of Asian and Pacific Islander Heritage Month, as well as Mental Health Awareness month. Launch Halo Infinite during May and show your support with a nameplate and emblem for each occasion.

Fans of the Halo television series currently airing on Paramount+ can look forward to some tie-in content coming to the game on May 10 in the form of various weapon charms and nameplates.

We’ve heard your feedback on Season 1 loud and clear, which means that Season 2 will see a number of improvements made to Weekly Ultimate Rewards.

Perhaps the most notable change on this front is that emblems will no longer be among the slate of Ultimate Rewards. Instead, upon completing your weekly challenges, you’ll be rewarded with stances, coatings, visors, weapon charms, and additional gear for your armor.

We’re incredibly grateful to the community for the detailed and passionate feedback on this system and we wholly agree that players should be rewarded for their time investment. We hope that this is a good step in the right direction and look forward to the weeks to come as more Ultimate Rewards become available.

The Ultimate Reward for the first week of Season 2 will be the Sentry stance for your Spartan.

For the Shop, Season 2 introduces a plethora of updated items with revised pricing and rotation schedules, which we believe will offer players greater variety at a better value.

The featured item in the Shop for the first week of Season 2 will be the Celox Legendary Armor Bundle.

Run into a bug, glitch, or other unexpected issue? Head over to the Halo Support site to submit a ticket and notify the team.

You can submit tickets on a wide range of topics that include reports of Audio Issues, Crashes, Game Save Corruption, Report a Player, General Bug Reports, and more.

And so, with all that covered, it’s time to jump into Season 2!

Build your RAKSHASA armor core with remnants of the fallen, heroically carry the enemy flag to victory on Breaker by soaring narrowly past the plasma drill in a Warthog, claim victory as the King of the Hill, earn glory as the Last Spartan Standing, and become a lone wolf to uncover the next movement of the odyssey in Halo Infinite’s multi-season story...

You can get Halo Infinite’s free-to-play Multiplayer here, and if you’ve not yet jumped into the Mjolnir-armored boots of the Master Chief then dive into the Campaign experience here.