Top 25 Greatest Players of All Time 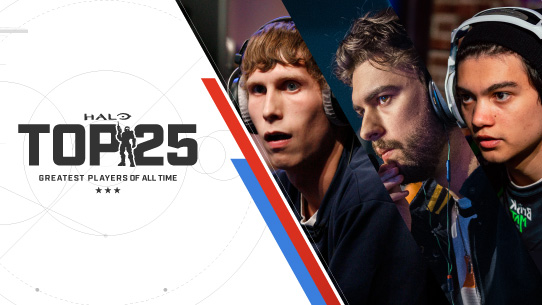 ByOfficial HCS
-  a year ago

Halo: Combat Evolved launched on the original Xbox in 2001 and once players were finished fighting against the Flood and the Covenant, they quickly turned their crosshairs against each other for pure competitive bliss. What started as rivalry in the household quickly escalated to the neighborhood, local schools and in what seemed like a blink of an eye, Halo esports became a global phenomenon with the level of competition and stakes increasing year after year.

We see Halo Infinite as a continuation of Halo esports’ long lineage, and thus wanted to take a moment to recognize and celebrate the incredible players that paved the way and those that are still dominating today. This is where the Halo Top 25 Greatest Players of All Time list comes in.

A panel of judges outside of the HCS team and across all Halo generations were selected and tasked with creating their own individual Top 25 lists.

The judges were given the following criteria and guidelines:

The players will be announced on the HCS Twitter account starting on Monday 9/6 at 10am PT, and for the first week we’ll be revealing three players a day which will then leave us with the Top 10. Along with the announcement, we’ll be celebrating the player’s success and sharing memories from their career. We encourage everyone to join the conversation online and share your favorite memories as well!

In Week 2 starting on Monday 9/13, we’ll be releasing a video each day starting with #10 and ending with #6. Each of these videos will be soley dedicated to the player, and you'll hear from Halo legends across the ages as they talk about what makes each of these players so great.

In Week 3, starting on Monday 9/20, we’ll again be releasing a video dedicated to each player. On Thursday 9/23, we’ll open up a community poll so you can weigh in on who you think is the Greatest Player of All Time. Finally on the last day, we will reveal both #2 and #1 players on the list, and again each with their dedicated video and time in the spotlight.

Determining the greatest Halo player of all time was no easy task and we took the process and gravity of the list very seriously. We know that each of you will have your own opinion on each of the players on the list and we encourage you all to share your thoughts with us on Twitter using the hashtag #HaloTop25. Do you think a player should have been higher on the list? Maybe there’s someone who didn’t make the cut who you thought for sure should have made it. Join the conversation!

We’ll be revealing the players one by one on the Official Halo Esports Twitter account, and to coincide with the Top 25 list, we’ve also launched the Official Halo Esports YouTube channel. We are very excited that Halo Esports will now have it’s own official home on YouTube. To start, the channel will feature  videos from this campaign, and has some historical footage to peruse as well. All of the video content we'll create going forward (including full tournament VODs) will also be made available on the channel and accessible for fans to enjoy.

Without revealing the names, we wanted to reveal the list and associated points so fans can see just how closely contested the list was. Halo pros both retired and current on this list are truly the Greatest Players of All Time.

At the core of it all this list is meant to recognize and celebrate the incredible achievements of these players over the course of their careers and Halo’s history. For those that are retired we say thank you on behalf of the entire Halo community for dazzling and inspiring us. For those that are still competing, thank you for the memories so far, and best of luck in Halo Infinite. And for all players that made this list of 2021, congratulations!