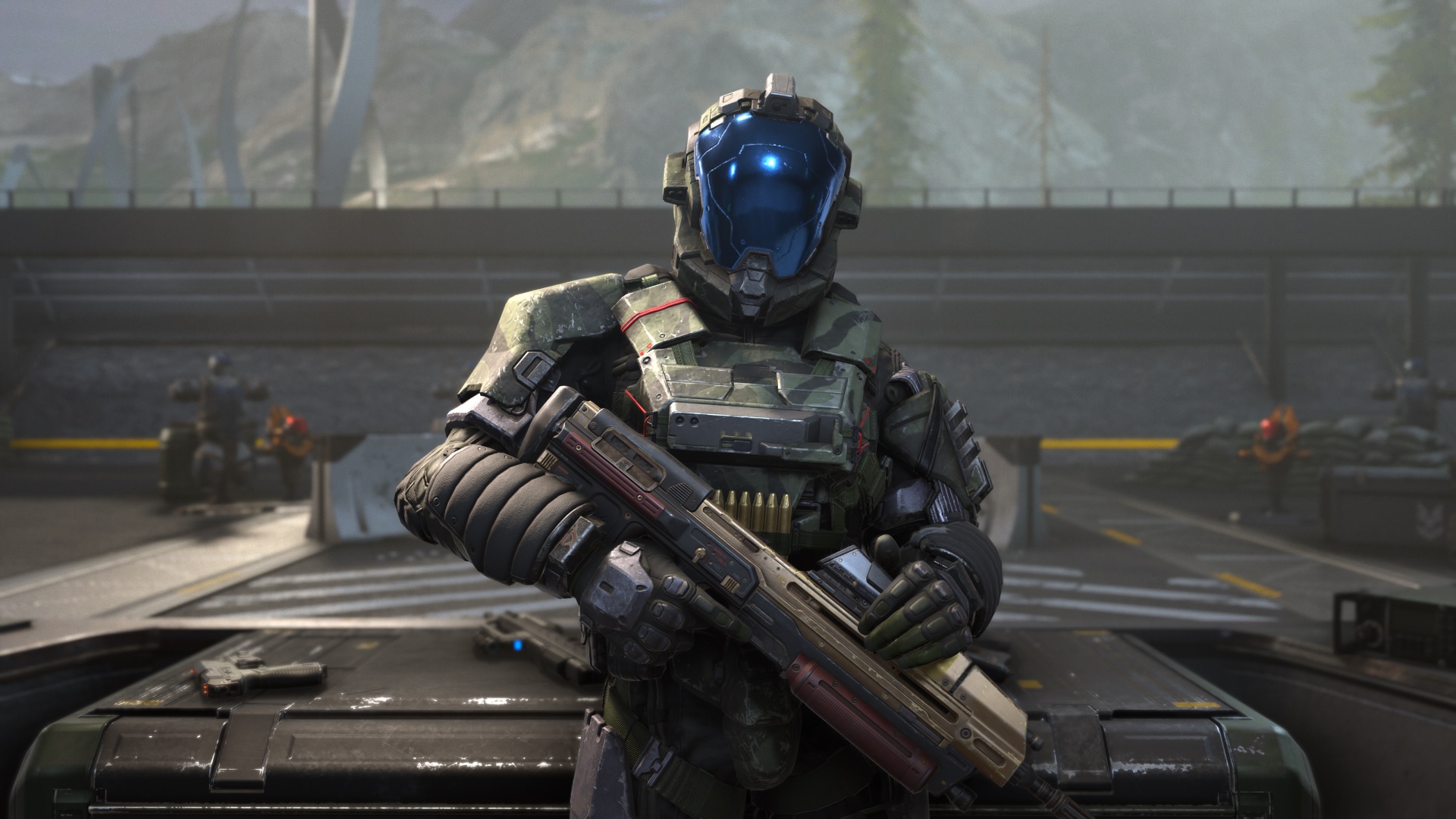 Welcome back to another Community Update!

Check in for your monthly round-up of all the latest goings on in the world of Halo, from the Alpha Pack event and Campaign Network Co-Op flight in Halo Infinite to our partnership with a group of community modders to restore various pieces of decades-old cut content from legacy Halo titles, and more.

At the shores of Halo Infinite, the Alpha Pack narrative event arrived on Tuesday and lasts for two weeks, spanning July 19 to August 2.

The Alpha Pack Event is centered around Last Spartan Standing, a free-for-all attrition-based game mode which can be played on all of Halo Infinite’s Big Team Battle maps, which includes:

Some adjustments have been made to the weapon order, you’ll find a broader variety of equipment in the pods that drop onto the map, and the deadliest among you will be able to pull out an energy sword as the final upgrade for those tense final encounters!

New Intel has dropped regarding some backstory on Spartan Sigrid Eklund, which you can read in-game (in the Message of the Day carousel) or on the Halo Waypoint seasonal hub.

Log in any time during the Alpha Pack Event to unlock the Iratus Unleashed emblem and nameplate.

Complete all your Weekly Challenges and the Ultimate Challenge to unlock the Tactical Clippy weapon charm.

Head to the Shop to grab the CAMBION Helmet Pack, and if you missed it last time you can grab the CELOX Armor Pack as well!

Grab your friends and head to Zeta Halo with up to four players to take on the Banished. While you’re at it, maybe you want to teach the Banished aboard the Warship Gbraakon another lesson, or go Skull hunting in the Repository, or prove your mettle once again in the House of Reckoning—in which case, you should definitely hit up the Mission Replay feature in your TACMAP and jump back to any previous mission.

Learn more about Campaign network Co-Op and Mission Replay in our preview blog.

Also, be sure to check out the livestream which details what’s in the flight and what you can expect.

Finally, make sure you’ve ticked all the boxes below so you and your friends can take part together!

Step 1: Make sure you’re signed up to the Halo Insider program.

Step 2: Ensure you have the entitlement to Halo Infinite (Campaign). (i.e. you have purchased it or have an active Xbox Game Pass subscription)

Step 3: If you’re participating on Xbox, have the Xbox Insider app downloaded, and opt into the Network Co-Op flight program once the flight is live. If you’re playing on Steam, you’ll be sent a unique key via Halo Insider communications to download the flighting build.

Step 4: Launch the build, party up with friends, and jump into Zeta Halo!

Roll out the green carpet and upgrade your Rocket Hog! With Xbox Game Pass Ultimate Perks, your Halo Infinite Rocket Hog can now rock the Pass Tense Coating (and grab some extra challenge swaps and XP boosts while you’re at it).

Claim your perks via the Perks gallery on your Xbox console or PC today!

For many Halo fans, one of the most interesting places to explore is the murky depths of the cutting room floor—information about the things that didn’t make it into the final release of the games in the series. Thorn beasts and blind wolves, excavators and microwave guns, cyborg soldiers and a certain E3 2003 demo that has for so long lived only in blurry camera footage on YouTube from many years ago...

Well, in case you haven’t kept up over the last few weeks, we’ve been detailing an official partnership between 343 Industries and a group of community modders to restore a bunch of this ancient content.

In this three-part series, we’ve explored the following:

PART 1: Cutting Room Floor – learn more about the old and cut content from 1999 MacWorld-era Halo, Halo: Combat Evolved, and Halo 2 that is being restored.

PART 2: Cutting Room Corps – meet the fine folks who have been working to revive this old content and learn more about their work.

And next week, you can look forward to...

PART 3: Cutting Room Lore – a special encyclopedia-style Canon Fodder issue providing more details on how certain elements from these past games are incorporated into the universe and canon.

We’ll see you at the party!

Spartans bear many burdens, their backs strain with the weight of the world—sometimes of the entire galaxy—on their shoulders, and they adorn the backplate of their armor with accessories to help them finish the fight.

You’ve worn tactical backpacks for some all-purpose hardened storage. You got all the gamerscore you needed to show off a fancy katana. You might’ve even protected your back with an entire original Xbox console, which may possibly weigh even more than the rest of your Mjolnir armor combined.

But now, you can step onto the battlefield with something new to alleviate the perilous burdens...

Simply log into Halo: The Master Chief Collection and you’ll unlock the Bean-117 back accessory, which comes to the game in-partnership with our friends at Mediatonic who made a game you might’ve heard of that recently came to Xbox as a free-to-play title called Fall Guys.

This item never expires. It’s there. It’s always there.

Tune in to the HCS MX Regional Finals all weekend long as the best of the best compete for their share of the $50,000 prize pool.

You can earn new customization content in Halo Infinite by watching on Twitch with Twitch Drops and catch the action live on YouTube all weekend long!

The Top 3 teams will secure Pool Play at the HCS Orlando 2022 Major in September.

Get the full breakdown of the event here!

We’ll be rounding out the year in style with a spectacular finale for the HCS World Championship in October—this is an event you’re not gonna want to miss!

Read up on the full details of the Halo World Championship here!

You can pre-order the Spartan Chonmage/Yokai statue exclusively at the Xbox Gear Shop.

Next, the Spartan Yoroi, only the most noble and skilled of warriors are able to don the blessed armor, a masterpiece collectable for any Halo fan. Featuring the Scarlett Empress coating, the traditional Kabuto helmet, Gatekeeper shoulder pads and the Shadow Raven knee pads, this statue is fit for battle.

Exclusively available in the Halo Infinite Multiplayer - Fracture: Tenrai event, now this legendary armor set can be yours to hold. Standing at just over 10" high and intricately painted, this Spartan will be an exemplary addition to any collection. You can find more info about the statue and pre-order locations on the Dark Horse website.

The statues are available for pre-order now and are slated to release in late 2022 or early 2023.

This figure stands at 3.83 inches tall and glows blue in the dark. Available to pre-order exclusively at GameStop.

The next novel from acclaimed author Kelly Gay releases August 9, 2022, and further explores some of the events that take place on Zeta Halo in the six months before the Master Chief is reawakened and the Halo Infinite campaign begins.

You can read (or listen to) a preview of the book’s opening chapter here, showcasing the Banished ambush of the UNSC Infinity from the perspective of Spartan Bonita Stone as the crew abandon ship to take their chances on the deadly and mysterious ringworld that Cortana has made her throne.

December 2559. Humanity has its back against the wall after the United Nations Space Command flagship Infinity drops out of slipspace into a devastating ambush launched by the Banished. As this fierce enemy alliance seeks to claim a mysterious object hidden within the ancient Forerunner construct known as Zeta Halo, the surviving UNSC corps now find itself compromised and its leadership out of reach—with remaining personnel forced to abandon ship and take their chances on the fractured, unpredictable surface of the Halo ring.

Now survival in this strange, alien environment—whether for Spartan super-soldiers or those who never thought they would see the battle up close—is measured day to day against a relentless and brutal adversary that always has the upper hand. Desperation grows, but the will to keep on fighting and enduring no matter the odds is never in doubt… even as the Banished seek to unleash a frightening new enemy that could doom them all....

WE'RE HIRING: Come join us on this great journey to build the future of the Halo franchise—check out our available roles and apply!

CANON FODDER: In the first of three Canon Fodder issues coming over the next few weeks, we take a closer look at the Alpha Pack event, details some new Covenant starship lore, and answer some lore questions from the community.

EMPLOYEE SPOTLIGHT: Senior Technical Lighting Artist Josh Marvel shares the story of his career, from filmmaking and digital art in New Hampshire to lighting AAA games in Redmond with 343 Industries. In his decade of work on Halo titles, Josh has helped in-game art technology advance by leaps and bounds, while also finding time to go bounding off into the PNW’s mountains on his skis and bike.

This one’s a personal favorite of mine from Nicolas “Sparth” Bouvier, who contributed almost fourteen whole years to the Halo franchise. His artistic work has been a constant and incredible source of inspiration, bringing to life some of the most awe-inspiring worlds within this universe.

The art above depicts the Ur-Didact and his wife, the Librarian, on the cover of Halo: Silentium, the third and final book in Greg Bear’s epic Forerunner Saga.

Silentium tells the story of the final movements of the Forerunner-Flood war as an ancient, cosmic game of vengeance draws to a close before the pyrrhic solution that would silence the galaxy is ignited.

Evidence-gathering agents known as Catalog have been dispatched to gather testimony from the major political players of the Forerunner ecumene, each relating their role in the grand tapestry of events—from the Librarian’s expedition to Path Kethona beyond the galaxy to discover the origins of the Flood, to the Ur-Didact's harrowing experience with the Gravemind that would set him on the path to madness, and beyond.

If you haven’t yet reclaimed a copy of this novel as it somehow draws ever closer to its tenth birthday, then be sure to do so and curse my name to the heavens when you get to the final page and are left a blubbering mess—as is the rite of passage that comes with this particular trilogy!

With that, we button-up another Community Update.

Grab your Alpha Pack rewards in Halo Infinite and jump into some Campaign Network Co-Op with your friends; bond your soul to Bean-117 and dominate the online battlefields in MCC; prepare for an epic weekend of HCS action with the MX Regional Finals; and pre-order your copy of Halo: The Rubicon Protocol to head back to Zeta Halo and discover more of what happened on the ring in the six months that lead up to the Master Chief’s heroic return.

Until we meet again...